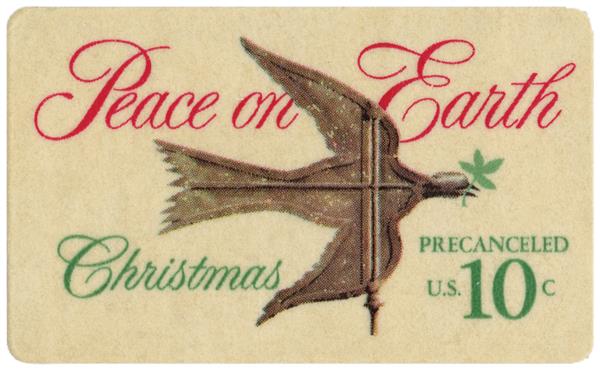 On November 15, 1974, the USPS issued its first experimental self-adhesive stamp.

Throughout the 20th century, US postage evolved through a number of significant innovations such as the use of the rotary press and phosphorescent tagging.  However, while these innovations may have gone largely unnoticed by the general public, one of the greatest postal innovations of the century was the introduction of self-adhesive stamps.  Though common today, they had a rocky start.

In 1974, the USPS began working on its first self-adhesive stamp.  The Bureau of Engraving and Printing produced the stamps on their Andreotti press and leased additional machinery from companies that produced self-stick labels.  The stamps were die-cut, stripped, rouletted, and cut into finished panes.  The stamps also had crossed center slits to prevent them from being removed from envelopes and reused. 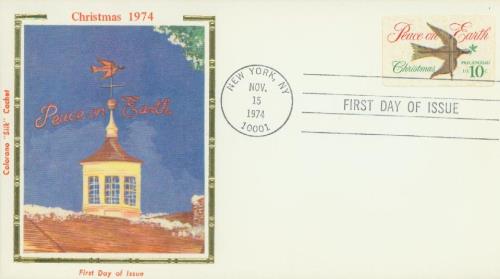 Additionally, the stamps had rounded corners and were produced on a backing paper (or liner).  Unlike today’s self-adhesive stamps, these stamps didn’t touch each other, and instead had lines of backing paper in between them.  On the edge of each sheet were 10 self-adhesive tabs with plate numbers and a variety of phrases including “Self Sticking Stamps,” “Remove from Backing,” and “Do Not Moisten.” 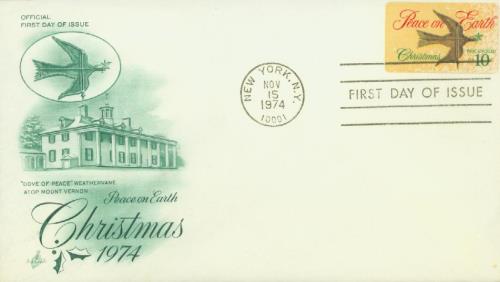 The Christmas stamp, picturing the weather vane from the top of Mount Vernon, was issued on November 15, 1974, in New York City.  Unfortunately, both the USPS and collectors would soon deem the experiment a failure.  For the USPS, production of the stamp was too expensive and crosscuts didn’t prevent them from being reused.  Years later, collectors would discover that the rubber-based adhesive created brown spots on the stamps and this adhesive would also stain the covers.

Because of all these issues, the USPS gave up on self-adhesives for 15 years.  Then in 1989, they decided to try again.  This time they used an acrylic-based adhesive and produced 18-stamp convertible booklets and strips of 18 for affixing machines.  The stamps went on sale on November 19, 1989, in Virginia Beach, Virginia, to coincide with the annual VAPEX stamp show.  However, the stamps themselves were only distributed to 15 cities for a 30-day test period.

Customers in those cities were then given a questionnaire asking how they liked the stamps.  Unfortunately, they were unpopular.  But this was likely because there was a 50¢ premium added to the booklets to cover the higher production costs.   This issue was also deemed a failure.

US #2475 – The first successful self-adhesive stamp, printed on plastic.

Not ready to give up, the USPS tried again the following year.  This time they printed the stamps on plastic instead of paper and they were issued in sheets the same size and thickness of paper currency for sale in select ATMs in Seattle.  There was no additional premium added to these stamps and they were considered a success.  The USPS then expanded the program, but the next stamps would be printed on paper because of complaints they had received from paper recyclers.

The experiments continued and then in 1992, the USPS issued its first nationally distributed self-adhesives since 1974, the 29¢ Eagle and Shield stamps.  They issued their first self-adhesive commemorative in 1996, honoring Tennessee Statehood.  The number of self-adhesives grew over the years and by 2002, almost all US stamps were issued self-adhesive.