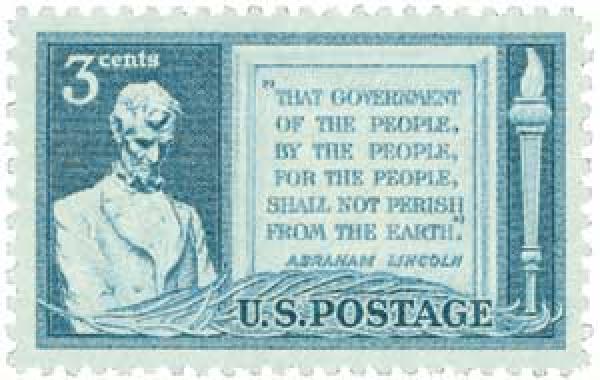 US #978 was issued on the 85th anniversary of the Gettysburg Address.

In early July 1863, General Robert E. Lee’s Confederate forces plowed northward, aiming to force Union politicians to end the war. Upon reaching Gettysburg, Pennsylvania, they met the Union Army of over 93,000 soldiers against their almost 72,000. A bloody three-day fight ensued, resulting in the largest number of casualties in single battle throughout the entire war (about 23,000 killed, wounded, captured, or missing on both sides). 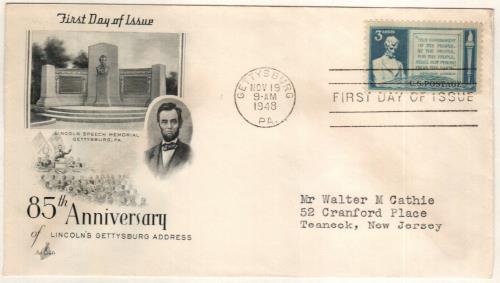 Soon after the battle, the people of Gettysburg sought a dignified and orderly way to bury the more than 7,500 soldiers’ bodies remaining on the battlefield. David Wills, a wealthy attorney, purchased the land needed for the cemetery that would be further funded by the states. 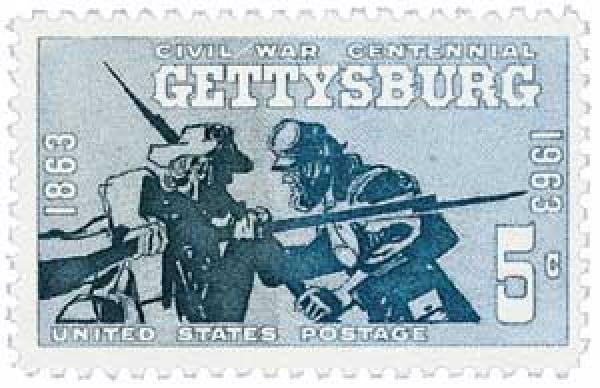 US # 1180 – This stamp was produced following the first nationwide contest inviting artists to design a US stamp.

On November 19, 1863, the Soldiers’ National Cemetery (later named the Gettysburg National Cemetery) held its dedication ceremony. The main speaker was Edward Everett, who held the crowd’s attention throughout his two-hour oration. Then Abraham Lincoln stood up to say “a few appropriate remarks,” as requested by the cemetery committee. 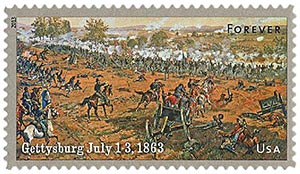 US #4788 pictures an 1887 chromolithograph by Thure de Thulstrup.

Soldier and lawyer E.W. Andrews was present that day, and remembered, “On this occasion [Lincoln] came out before the vast assembly, and stepped slowly to the front of the platform, with his hands clasped before him, his natural sadness of expression deepened, his head bent forward, and his eyes cast to the ground.

“In this attitude he stood for a few seconds, silent, as if communing with his own thoughts; and when he began to speak, and throughout his entire address, his manner indicated no consciousness of the presence of tens of thousands hanging on his lips, but rather of one who, like the prophet of old, was overmastered by some unseen spirit of the scene, and passively gave utterance to the memories, the feelings, the counsels and the prophecies with which he was inspired. 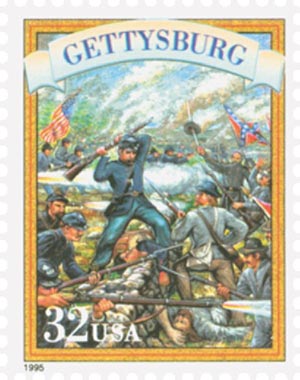 “…There was such evidence of wisdom and purity and benevolence and moral grandeur, higher and beyond the reach of ordinary men, that the great assembly listened almost awe-struck as to a voice from the divine oracle.”

At the time, the President’s main concern was maintaining the support of the Union in the war effort. His two-minute speech captivated the crowd of about 15,000.

Lincoln reminded listeners of the nation’s past, acknowledged the present struggle to preserve the Union, and gave hope for the future. His opening, “Four score and seven years ago,” referred to the signing of the Declaration of Independence, which stated the equality of all men, and their inalienable rights. 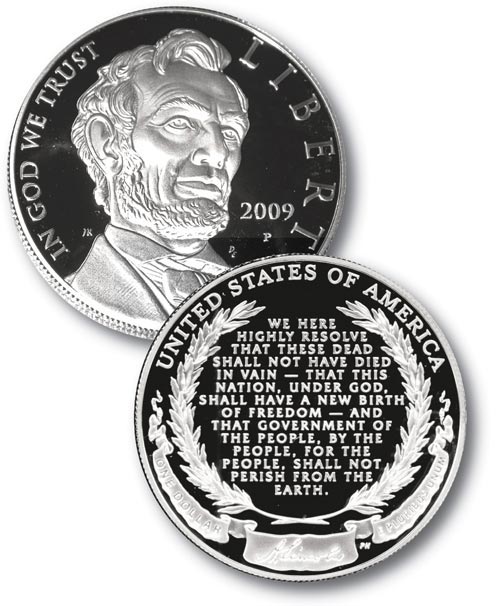 Item #CNPR09 – Lincoln Silver Proof Dollar with an excerpt from Gettysburg Address on the back.

Lincoln honored the soldiers who “here gave their lives that the nation might live,” and encouraged those who remained to be “dedicated here to the unfinished work which they who fought here have thus far so nobly advanced.” He looked to the future when the nation would have “a new birth of freedom – and that government of the people, by the people, for the people, shall not perish from the earth.”

The speech was met with silence, which Lincoln interpreted as failure. To the contrary, the audience was in awe at the words he had spoken. President Lincoln’s Gettysburg Address has since become one of the most famous speeches in America’s history.

Click here to read the full text of the Gettysburg Address.