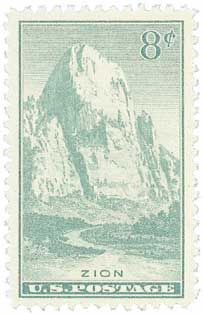 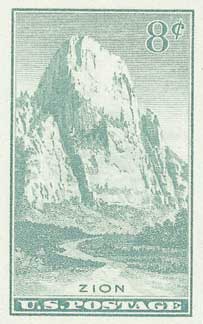 The Virgin Anasazi and Parowan Fremont inhabited the area for a time.  They were likely driven from the area, however, by the harsh conditions of long droughts and occasional massive flooding.  Eventually the Southern Paiute and Ute settled in the area.

The first known Europeans to enter the area are believed to have been Franciscan missionaries in 1776.  Trapper Jedediah Smith explored some of the area in 1825 while working for the American Fur Company.  Then in 1847, Mormon farmers from the Salt Lake area began to settle in the area around the Virgin River.  They named the area Kolob, which is the heavenly place closest to God in Mormon scripture.

In 1863, Isaac Behunin established a home on the floor of the Zion Canyon where he farmed corn, tobacco, and fruit.  He is credited with naming the area Zion, after the place of peace in the Bible.  Additional families soon followed and the floor of the canyon continued to be farmed until 1909.

John Wesley Powell’s expedition traveled through the area in 1869, and he returned again in 1872.  He named the canyon Mukuntuweap, which he thought was the Paiute name.  This helped to increase knowledge and interest in the area.  Then in 1904, paintings of the canyon by Frederick S. Dellenbaugh were displayed at the St. Louis World’s Fair.  The following year an article in Scribner’s Magazinegave the area even more national attention.  The combination of paintings, photographs, and this article, led President William Howard Taft to declare the area the Mukuntuweap National Monument on July 31, 1909. 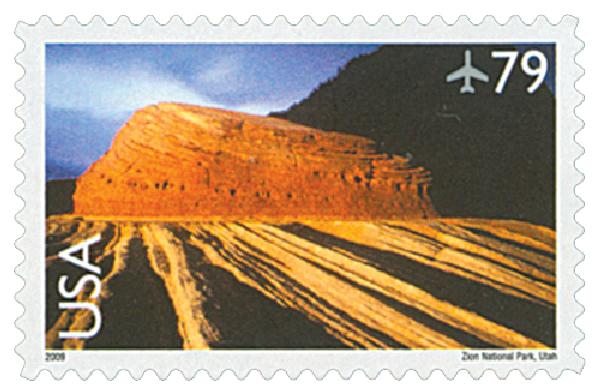 US #C146 – from the Scenic American Landscapes Series

In 1917, the director of the National Park Service visited the monument and suggested that the name be changed to Zion, as Mukuntuweap was unpopular with the local community.  Congress approved the change, expanded the protected area, and made it a national park.  The new Zion National Park was established on November 19, 1919.  A nearby separate area known as the Zion National Monument was established in 1937 and then added to the park in 1956. 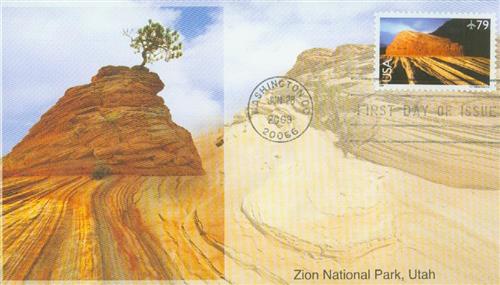 Tourism to the canyon was slow initially, as there were few established roads in the area.  The road to Zion Canyon was built in 1917, allowing for the first tourists to make their way safely.  Another major road, the Zion Mount Carmel Highway, was built in the late 1920s.  One of the most notable features of this road is a 1.1 mile tunnel with large windows cut into the sandstone cliff. 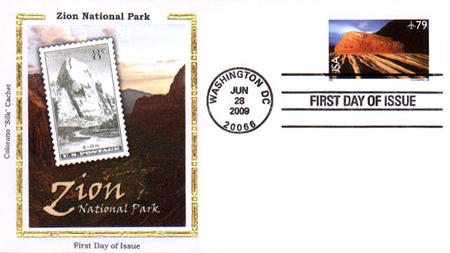 The most distinctive feature in Zion is the series of slot canyons.  Slot canyons are deep and narrow – sometimes only a few feet wide, and as deep as 100 feet.  They’re formed by a rare set of conditions.  Water from the Virgin River and swirling wind currents cut ravines through the rock.  Utah has the highest concentration of slot canyons in the world.