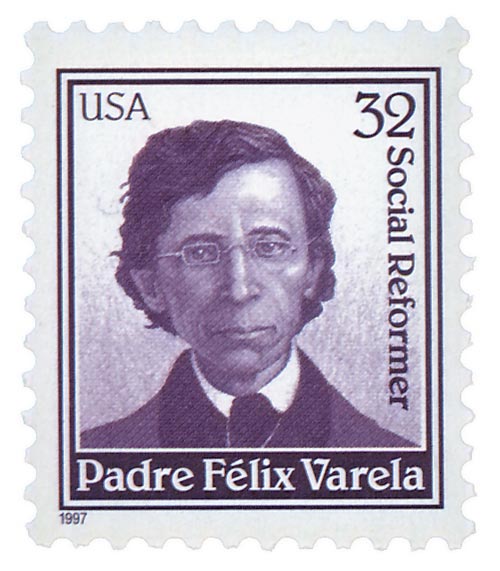 US #3166 was the first US stamp with a vignette printed entirely by microprinting.

After his mother’s death when he was young, Valera went to live with his grandfather in St. Augustine, Florida.  His grandfather, Lieutenant Bartolomé Morales, was a commander of the military forces in Spanish Florida.

When he was a teenager, Varela’s grandfather wanted to send him to a military academy in Spain.  Varela refused however, and instead returned to Cuba to study to become a Roman Catholic priest.  He attended the only seminary in Cuba, the San Carlos y San Ambrosio Seminary in Havana.  By 1811 he was ordained a priest and, despite his youth, named a professor of philosophy at the college.  He also taught physics, chemistry, Latin, and rhetoric.  An innovative educator, Varela was a firm believer in giving women the same education as men, and he actively lobbied for the abolition of slavery.  He also published many philosophical pamphlets and books. 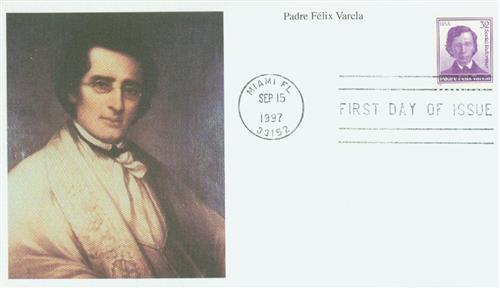 Many prominent Cubans were his students, including Dr. José de la Luz y Caballero.  De la Luz – credited with being the father of public education in Cuba – said of Varela, “As long as there is a thought in Cuba, we will have to remember him, the one who taught us how to think.”

In addition to his contributions in the field of education, he was chosen to represent Cuba in the Cortes Generales of Spain in Madrid.  There, Varela argued for independence from Spain and published an essay urging the abolition of slavery.  Varela was sentenced to death for his activism, and fled to Gibraltar before returning to the United States, where he lived in New York City. 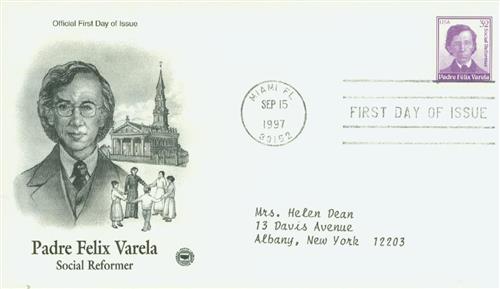 In the United States, Valera helped the poor and worked for racial, ethnic, and religious tolerance.  Varela founded churches, orphanages, nurseries, and the country’s first Spanish-language newspaper, El Habanero.  He continued to publish articles about human rights, religious tolerance, and education.  In 1832, he organized the New York Catholic Temperance Association for the care of cholera victims.  During this terrible epidemic, he virtually lived in hospitals and nurseries caring for the ill. 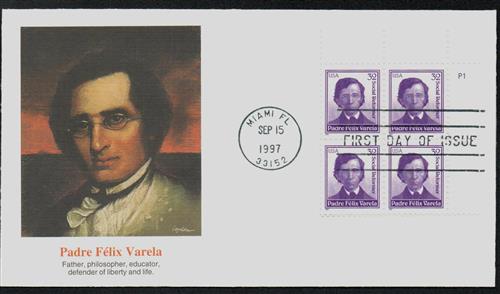 In 1837, Varela was named vicar general of the Diocese of New York.  In that capacity, Varela played a major role in the church’s handling of the surge of Irish refugees.  He learned the Irish language so he could communicate with them and speak on their behalf.  Varela dedicated the rest of his life to encouraging cooperation between different ethnic groups.  St. Mary’s Seminary of Baltimore later named Varela a doctor of theology.

When he began suffering from severe asthma, Valera retired to St. Augustine.  He spent his final years there before his death on February 18, 1853.  His former students honored his memory by building a chapel in the cemetery there.  Nearly 60 years after his death, his remains were returned to Cuba. 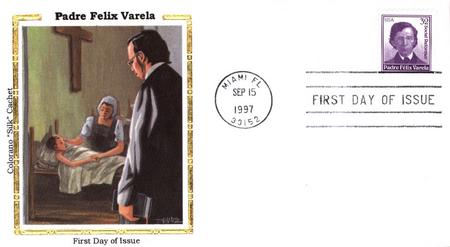 Two foundations bearing Padre Varela’s name, based in New York and Miami, continue his noble work.  Varela has achieved the first of three steps towards possible sainthood (the three steps are veneration, beatification, and canonization).  He could become the first Cuban-born saint if he is successfully canonized.