U.S. #4226 – In his later years, Hubble campaigned to have astronomy seen as an area of physics for Nobel Prize consideration. The change wasn’t adopted until shortly after his death.

On November 20, 1889, one of the world’s most renowned astronomers, Edwin Hubble, was born.

Hubble was born in Missouri and later moved to Illinois. As a child, he was a gifted athlete with an interest in science, though his grades didn’t always reflect his brilliance. He concentrated on mathematics and astronomy at the University of Chicago before studying at The Queen’s College in Oxford, England, as a Rhodes Scholar. He nearly gave up a career in science when he changed his academic focus to law, at his father’s request. 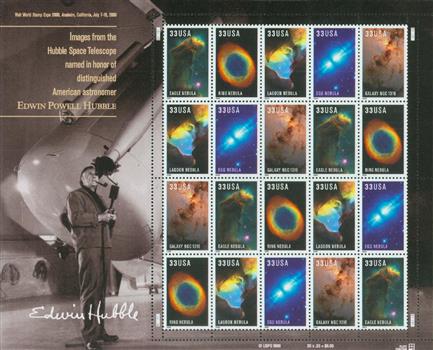 U.S. #3384-88 pictures images captured by the Hubble telescope. The selvage features a photograph of Hubble standing next to the Schmidt telescope at the Palomar Observatory in California.

After graduating, Hubble came back to the United States and took a job teaching Spanish, physics, and mathematics. Following his father’s death, Hubble decided to pursue his real passion – astronomy. He then worked at the Yerkes Observatory in Wisconsin as a graduate student, and earned his PhD. As the U.S. entered World War II, Hubble joined the Army and reached the rank of lieutenant colonel, though he never saw combat.

After spending a year in Cambridge studying astronomy, Hubble was offered a position at the Mount Wilson Observatory near Los Angeles, California. It was here that he made one of his greatest discoveries while using a 100-inch reflecting telescope to study nebulae. Originally considered part of our own Milky Way galaxy, Hubble discovered these nebulae were actually galaxies beyond our own. He created a classification of these galaxies, known as the Hubble tuning fork diagram, which sorted them by shape and distance.

Hubble’s studies also revealed that galaxies move away from each other, creating an expanding universe, an observation known as Hubble’s Law. This led to Hubble’s Constant, which stated that the greater the distance between the galaxies, the faster they move away from each other. His work provided the evidence supporting the Big Bang theory of how the universe was formed.

Launched in 1990, the Hubble telescope gives incredibly clear images of the objects in deep space. It was named to honor the man who discovered the breadth of our cosmos. The Hubble orbits 380 miles above the Earth, beyond the atmosphere which would blur the images. It can detect objects 50 times fainter than those observed from Earth-bound telescopes.