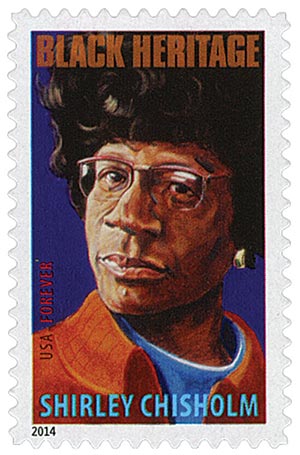 US #4856 – Chisholm was the 37th honoree in the Black Heritage Series.

Born in Brooklyn, Chisholm was the daughter of Caribbean immigrants.  Her mother struggled to raise her four children and work, so she sent them to live with her mother in Barbados.  Chisholm spent five years there and attended a one-room schoolhouse that provided her with a good, serious education.

Chisholm returned to the US in 1934 and attended an all-girls’ high school.  She went on to earn a Bachelor of Arts from Brooklyn College where she won several awards for her debating skills.  Three years later she married Conrad O. Chisholm. 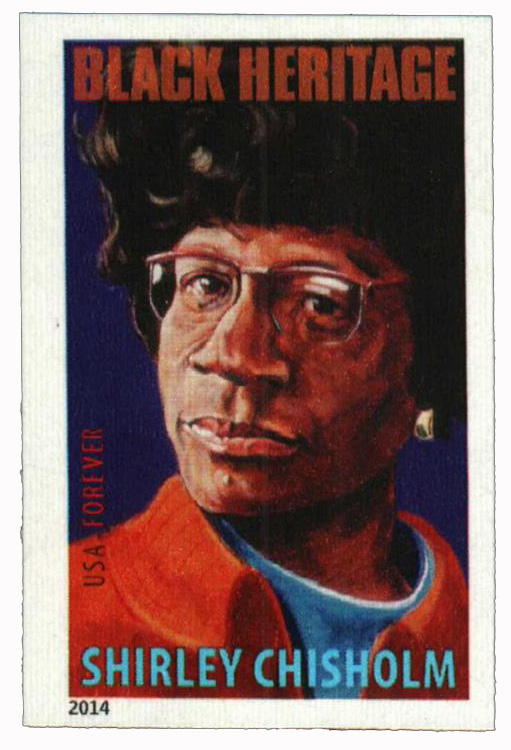 Chisholm earned an MA from Columbia University in 1952 and served as director of the Friends Day Nursery from 1953 to 1959.  She then served as an educational consultant for the Division of Day Care, establishing herself as an authority on childhood education and welfare.  Soon she grew interested in politics and volunteered with the Bedford-Stuyvesant Political League and the League of Women Voters.

Chisholm’s first political post was as a member of the New York State Assembly from 1965 to 1968.  In that role, she opposed literacy tests that required English (arguing that a person that understands something in their native language isn’t illiterate), won unemployment benefits for domestic workers, and helped establish a SEEK (Search for Education, Elevation and Knowledge) program.

In 1968, Chisholm ran for the US House of Representatives with the campaign slogan, “Unbought and Unbossed.”  She won that election, becoming the first black woman elected to Congress.  The steely grit that would define Chisholm quickly became apparent.  When she was assigned to an agricultural committee, the new congresswoman insisted on being reassigned to a position relevant to her urban constituents. 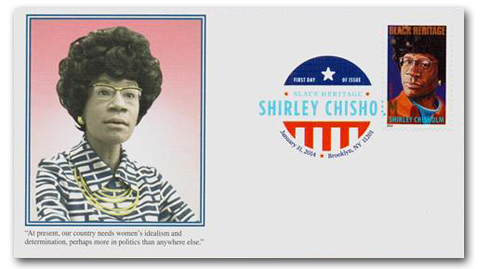 During her early years in the House, she helped to expand the food stamp program and helped create the Special Supplemental Nutrition Program for Women, Infants, and Children (WIC).  Chisholm also served on the Veterans’ Affairs Committee and the Education and Labor Committee, which was the post she had most hoped for.

In 1971, Chisholm was a co-founding member of the Congressional Black Caucus.  In spite of breaking ground for women and minorities, Chisholm found herself handicapped by both gender and race.  The Congressional Black Caucus withheld its endorsement because of her gender.  When she sought the 1972 Democratic presidential nomination, support from the National Organization for Women was minimal because of her race. 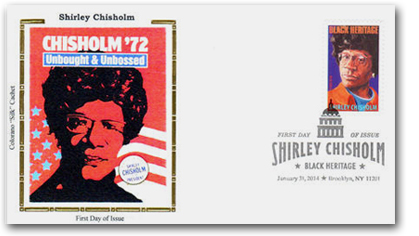 Chisholm faced several challengers in the primary, including self-proclaimed segregationist George Wallace. Chisholm survived three assassination attempts, while Wallace was paralyzed in another.  The congresswoman’s visit to Wallace’s hospital room created a storm of media coverage and controversy.  Chisholm was later asked why she ran when she had no hope of winning.  She responded, “I ran because somebody had to do it first.”  She paved the way for future women and minorities to be a part of the political process. 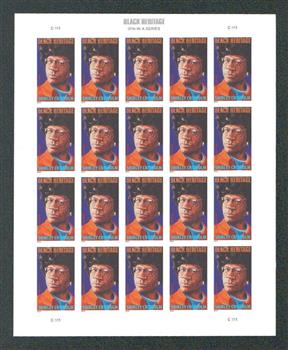 In the end, Chisholm served seven consecutive terms representing New York’s 12th Congressional District.  From 1977 to 1981, she served as Secretary of the House Democratic Caucus.  She retired from Congress in 1982 to take care of her second husband, who had been injured in a car accident.  Chisholm returned to education, teaching politics and sociology at Mount Holyoke College from 1983 to 1987.

Chisholm retired from teaching in 1991, moving to Florida.  President Bill Clinton nominated her for US Ambassador to Jamaica, but she was unable to take the post due to her health.  She died on January 1, 2005.  A decade later she was posthumously awarded the Presidential Medal of Freedom.

Facebook
This entry was posted in November 2019, This Day in History. Bookmark the permalink.
Click here to cancel reply.