Posted on November 6, 2016 by MysticStamp 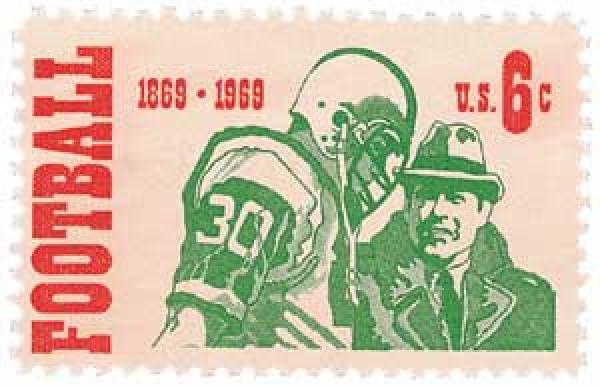 On November 6, 1869, Rutgers College and the College of New Jersey (later named Princeton) played the first game of intercollegiate football in America.

The two schools were among the first colleges in America, both established in the mid-1700s, and they shared a bond going back decades. Located just 20 miles apart, Rutgers based its curriculum on that of Princeton’s, and the two schools were nearly merged in 1793.

Due to their close proximity and shared history, the two schools formed a spirited rivalry. According to some accounts, Princeton team captain William S. Gummere was the person who first suggested the two teams play. He offered to bring his team to Rutgers for the first game, and then the second would be played at Princeton, and a third at a later time. These proposed three games would mark the first season of college football. 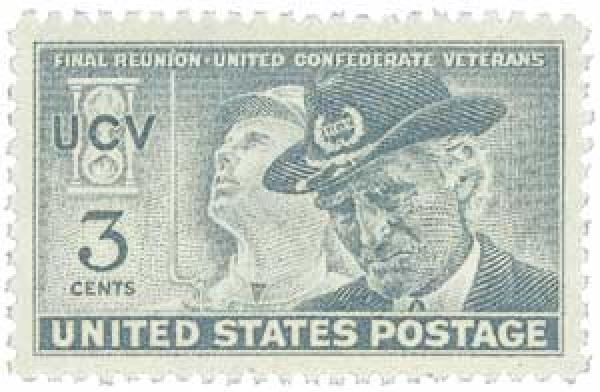 So on the morning of November 6, 1869, the 25-man Princeton team and a group of student spectators boarded a train for an hour-long ride to Rutgers. The Princeton boys arrived at Rutgers, toured the campus, and were treated to lunch by the home team. The Princeton players were larger while the Rutgers were more agile. Among those playing that day were future clergymen, a state senator, a future chief justice of the New Jersey Supreme Court, Confederate and Union Civil War veterans, and a finalist in the first U.S. Open Tennis Tournament. At 3 P.M., both teams took to the field with about 100 spectators on the sidelines. 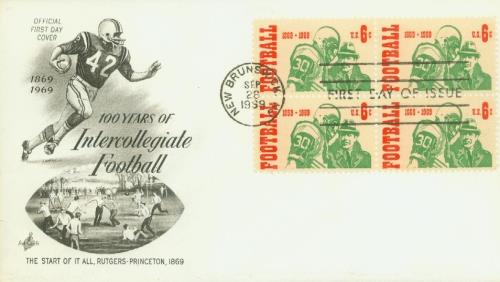 Both teams agreed that they would play based on the rules used by the home team, Rutgers. These rules were based on the Football Association’s rules. So each team consisted of 25 players whose mission was to kick the ball into the opposing team’s goal. They couldn’t throw or carry the ball. Indeed, it wasn’t a game too similar to modern football, but more closely resembling soccer or rugby.

Though Rutgers won the coin toss, Princeton got the ball and kicked it to the side, where Rutgers players surrounded it. Within five minutes, Rutgers scored the first goal. According to the rules, each goal was considered a game, and they would play a total of 10 games. 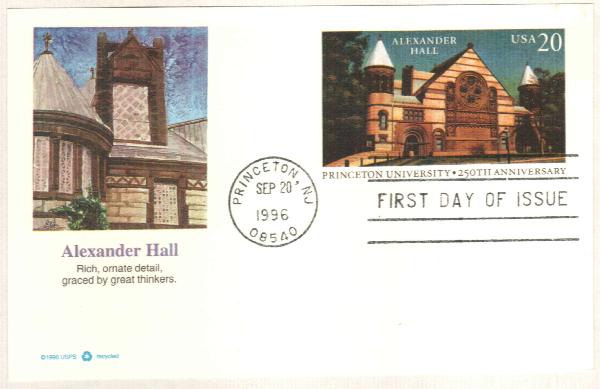 A writer for the Rutgers newspaper explained the ensuing game: “To describe the varying fortunes of the match, game by game, would be a waste of labor for every game was like the one before. There was the same headlong running, wild shouting, and frantic kicking. In every game the cool goaltenders saved the Rutgers goal half a dozen times; in every game the heavy charger of the Princeton side overthrew everything he came in contact with.”

After the eighth goal the game was tied, but then Rutgers scored the ninth and tenth, winning the game 6 to 4.   Immediately after their victory, the Rutgers men ran the Princeton players out of town. 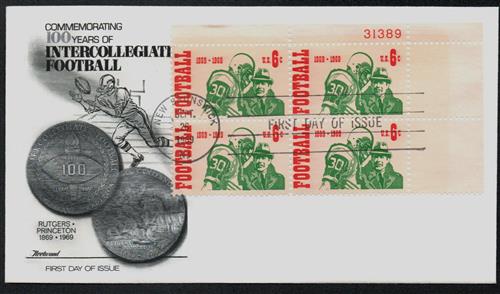 A week later the two teams met again, this time at Princeton. For this game they followed the rules of the Princeton field. Among the differences was the granting of a “free kick” to any player that caught the ball on the fly. This enabled the Princeton team to win the second game 8 to 0. A third game was scheduled but never held, either because teachers worried it took focus off of studying, or because they couldn’t agree on the rules. Years later, both teams were awarded a shared honor for the tied college football national championship for the 1869 season. In 1969, both teams took the field again for a centennial rematch, won by Rutgers 29 to 0.

Click here to see “The First Game,” a painting by Arnold Friberg depicting this game.

Facebook
This entry was posted in November 2016, This Day in History. Bookmark the permalink.