Posted on November 9, 2017 by MysticStamp 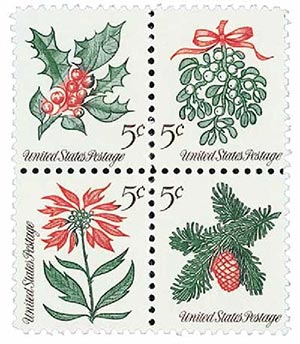 A se-tenant is two or more stamps with different designs or values printed together on the same sheet. The name comes from the French phrase for “joined together” or “holding together.”

While there were no more se-tenant issues for over 100 years, U.S. did issue stamps with different designs but as part of imperforate souvenir sheets in the 1930s, 40s, and 50s. These included #778 for the Third International Philatelic Exhibition, #948 for CIPEX, and #1075 for FIPEX. While these all were sheets with different images, they’re considered souvenir sheets or miniature sheets, pictured reprints of previously issued stamps, and were imperforate.

America issued its first Christmas stamp in 1962 after receiving thousands of requests for a stamp to mark the holiday season. Perhaps based on the popularity of Christmas stamps in their first two years in use, the Post Office decided to make the third issue special by including four stamps with different designs. 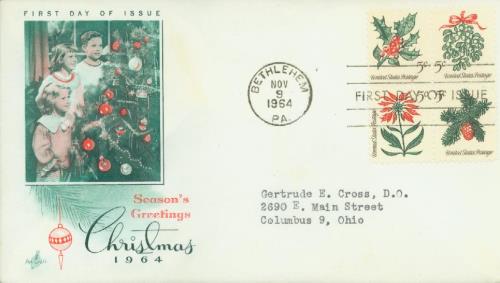 Issued on November 9, 1964, the third Christmas issue pictured four plants associated with the holidays. The first, mistletoe, symbolizes peace, according to ancient tradition. Holly symbolizes the thorns placed upon Christ’s head. The use of evergreens for trees and wreaths is depicted. The poinsettia is the traditional Christmas flower. 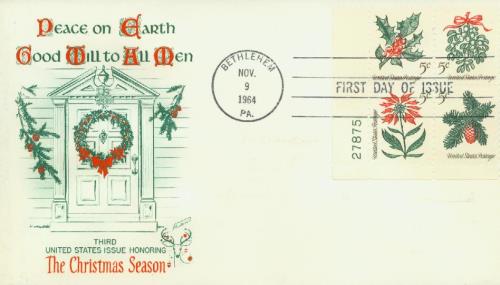 The popularity of this issue led the Post Office to continue to experiment with se-tenants and attached stamps. The next se-tenant came in 1967, the so-called Space Twins, #1331-32. Since then, the Post Office has issued at least one se-tenant every year.