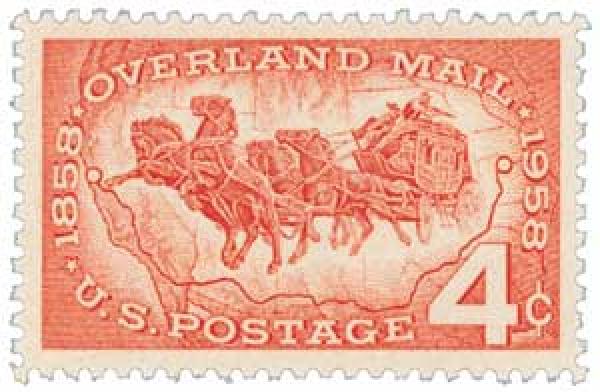 U.S. #1120 pictures an Overland Mail coach under attack and a map of Butterfield’s route.

On October 10, 1858, the first shipment of overland mail arrived in San Francisco.

Like Americans everywhere, the ’49ers in California wanted to get their mail, but 2,000 miles of desert and treacherous mountain passes lay between them and the end of the eastern mail lines. As a result, mail traveled by ship and across the Isthmus of Panama. In 1850 it took Californians six weeks to learn their territory had become a state. Outraged, they clamored for faster mail service. 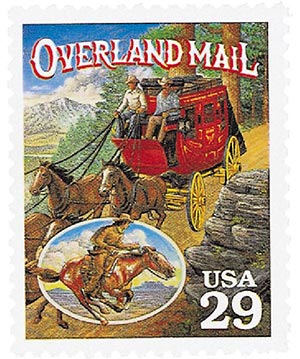 Although various companies set up stagecoach runs from the Missouri frontier to the West, the service was unreliable and oftentimes inefficient. On June 22, 1857, James E. Birch was awarded the contract for a southern mail route. In July of that year, a mail train left San Antonio, Texas, on its way to San Diego, California. Pack animals carried the bags of mail, leading to the nickname, the “Jackass Express.” 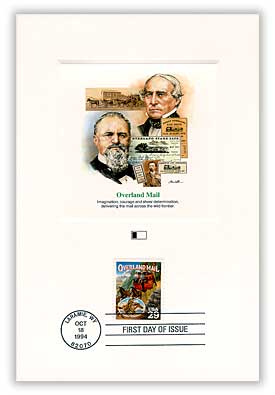 The first journey took 53 days – a new record for overland mail. But Birch died while at sea before it arrived. His successor, I.C. Woods, continued the service before learning of Birch’s death. He reported the situation to the Post Office Department, and the contract was transferred to another service.

On September 16, 1857, the Post Office awarded a $600,000-per-year contract to John Butterfield to establish another overland route. The agreement to deliver mail twice each week was the largest ever awarded in the U.S. at the time. The route would go through Texas, New Mexico, and Arizona.

After about a year of preparation and $1,000,000 invested, the first mail shipment began when the first stagecoach left St. Louis on September 16, 1857. Butterfield had gathered over 2,000 mules and horses, 200 coaches, and 1,200 employees. The first shipment arrived in San Francisco on October 10, in 23 days, 23 hours – under the 25-day obligation his contract required. It had completed a journey of 2,800 miles. 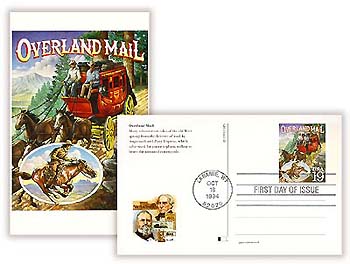 Trips were made each week until March 1861, when the route was discontinued because of the start of the Civil War. Wells Fargo, which had taken over the company from Butterfield, used a northern route to continue service during the war. The Pony Express, which could deliver mail in just 10 days, briefly replaced Overland Mail before it too was replaced by telegraphs and railroads. 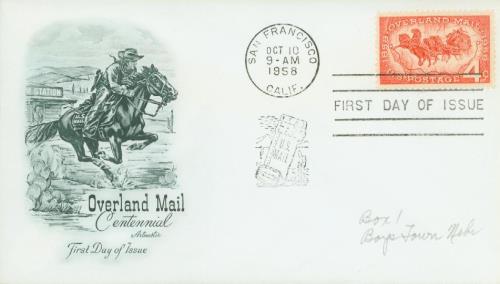 When U.S. #1120 above was first issued, it caused significant debate. It was issued on October 10, 1958, and pictured Butterfield’s route, essentially honoring that as the first overland mail delivery. This upset people in San Diego and Texas who felt the honor belonged to Birch. They launched a letter writing campaign to have his efforts honored on the stamp, but their requests went unanswered.

Click here for more on the Butterfield Overland Mail Route.