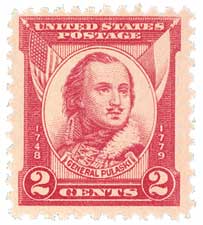 Kazimierz Michał Władysław Wiktor Pułaski (also known as Casimir Pulaski) was born on March 4 or 6, 1745, in Warsaw, Poland. He entered the military in 1762 and later joined the Bar Confederation, a group that fought to defend Poland’s independence.

Pulaski claimed victory in his first battles against the Russians in April 1768. In the coming years, despite being captured by enemy forces, Pulaski would go become a de facto leader of the Bar Confederation troops. However, after he joined in a failed plot to kidnap King Poniatowski, he was expelled from the Austrian territories.

Get all the stamps and covers on this page in one easy offer. Click the image to get them all now.  (Item #TDIH101117)

Though Pulaski was one of the most famous and accomplished leaders of the conflict, he was stripped of all dignity and honors in Poland. The king ordered all his possessions confiscated sentenced him to death. Pulaski attempted to form a new army in the Ottoman Empire but failed and eventually fled to France. Pulaski spent much of 1775 in France in jail for debts, though his friends eventually financed his release. 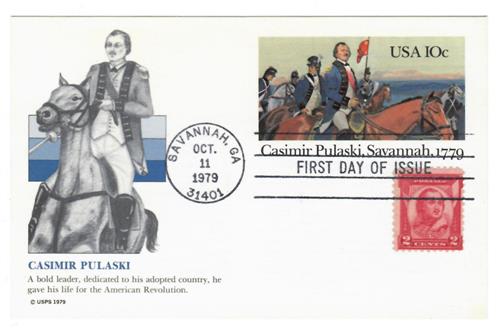 Around this same time, the Marquis de Lafayette appealed to Pulaski to join the American cause in the Revolutionary War. He then met with Benjamin Franklin in the spring of 1777.   Impressed, Franklin wrote to General Washington “Count Pulaski of Poland, an officer famous throughout Europe for his bravery and conduct in defence of the liberties of his country against the three great invading powers of Russia, Austria and Prussia … may be highly useful to our service.” 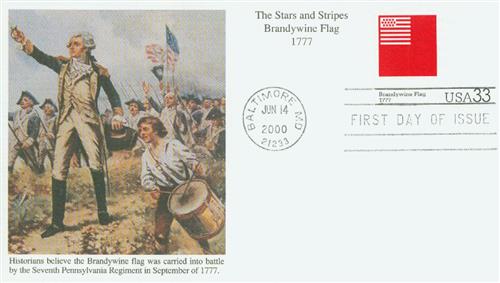 On Franklin’s recommendation to join the Continental Army Cavalry, Pulaski sailed for America, arriving on July 23, 1777. In a letter to Washington he wrote, “I came here, where freedom is being defended, to serve it, and to live or die for it.” He met Washington in August and first entered battle at Brandywine on September 11. During that fight, Pulaski organized a retreat after the British gained the upper hand. Pulaski’s actions saved the lives of many Americans, including General Washington. 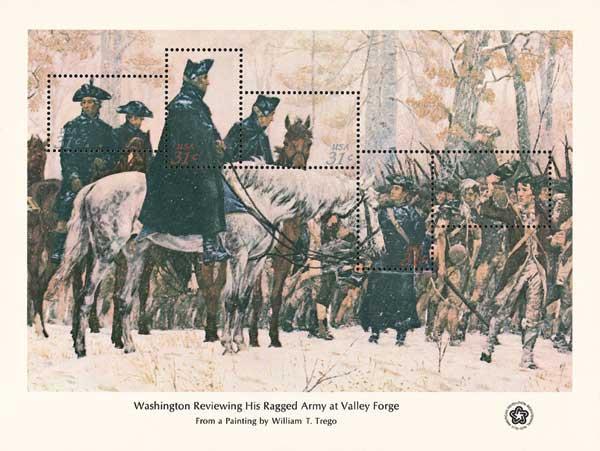 U.S. #1689 pictures The March to Valley Forge by William Trego

In the coming months, Pulaski also fought at Germantown, spent the winter at Valley Forge, and aided General Anthony Wayne at Burlington. In 1778, Pulaski was authorized by Congress to form the Pulaski Cavalry Legion. These 350 men were trained in cavalry tactics and Pulaski often used his own money to supply their equipment. Referring to “Pulaski’s Legion,” a British officer said they were “the best damned cavalry the rebels ever had.” In this service, Pulaski took part in the Affair at Little Egg Harbor, the Sullivan Expedition, and the Siege of Savannah. 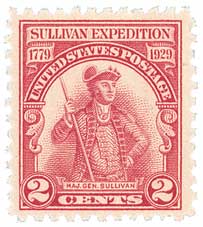 U.S. #657 was issued for the 150th anniversary of the Sullivan Expedition.

On October 9, 1779, Pulaski led a cavalry charge against the British in Savannah, Georgia, where he was wounded. He died two days later.

In the years since, the U.S. has dedicated many memorials to Pulaski, and October 11 is celebrated as General Pulaski Memorial Day.