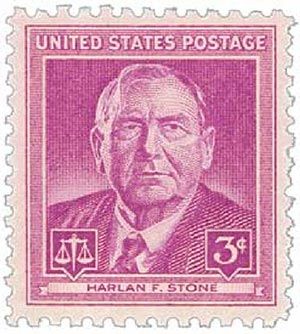 US #965 was designed to resemble the Famous Americans stamps. Click the image to order.

Stone attended Amherst College before earning his bachelor of law degree from Columbia Law School in 1898.  He practiced law in New York City for a few years before returning to Columbia as a teacher and later the dean.

During World War I, Stone served on the War Department’s board of inquiry, reviewing nearly 3,000 cases of conscientious objectors that had been denied by their draft boards.  After the war, he grew increasingly unhappy at Columbia and resigned his deanship, joining a prestigious New York law firm.

In 1924, President Calvin Coolidge (who had known Stone at Amherst) appointed him US Attorney General.  Coolidge believed Stone would be a fitting person to oversee all of the investigations into the scandals of the Harding administration.  Among his first acts in this new office was appointing J. Edgar Hoover to head of the Department of Justice’s Bureau of Investigation (later the FBI). 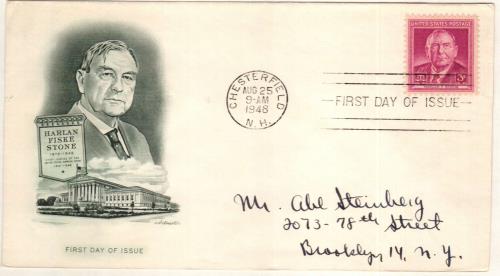 US #965 – Classic First Day Cover. Click the image to order.

Stone directed Hoover to model the agency after Britain’s Scotland Yard, and it soon was more efficient than any other police organization in the nation.  As attorney general, Stone personally argued many of the department’s cases in federal court and led an anti-trust investigation into the Aluminum Company of America. 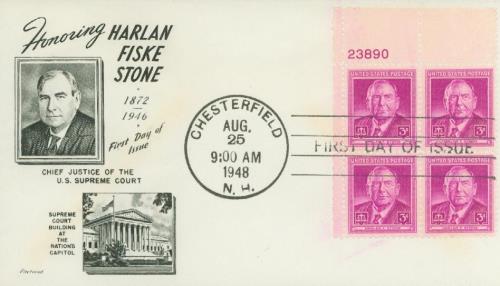 Following the election of 1924, Justice Joseph McKenna resigned from the Supreme Court.  Early the next year, President Coolidge nominated Stone to replace him as an associate justice.  He was confirmed a month later by a vote of 71 to 6. 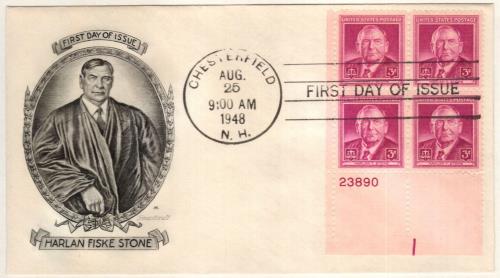 During Stone’s first few years on the court, much of its focus was on the relationship between businesses and government.  Though he was a conservative, Stone often sided with the liberal justices.  In the 1930s, he, Louis Brandeis, and Benjamin Cardozo became known as the Three Musketeers of the Supreme Court.  They supported President Roosevelt’s New Deal, even as the other justices opposed it. 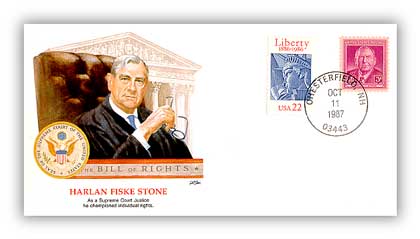 In 1941, Roosevelt nominated Stone for chief justice to replace the exiting Charles Evans Hughes.  He remained in the post until his death.  During Stone’s years as chief justice, views of Constitutional laws were changing.  Frequently, the court was divided.  Although Stone was a conservative, he often voted to uphold liberal measures.

In 1946, Stone suffered a cerebral hemorrhage and died on April 22.