Start of the America Series 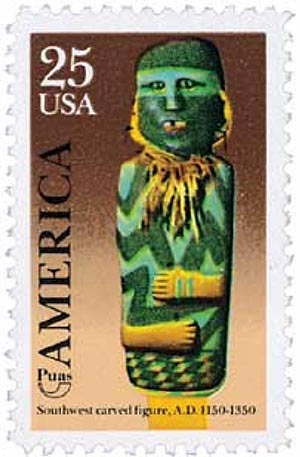 US #2426 – The first stamp in the series picturing a Southwest carved figure. Click the image to order.

On October 12, 1989, the USPS issued the first stamp in the America Series.

The stamp series was a collaboration between the 24 Western Hemisphere countries in the Postal Union of the Americas and Spain (PUAS).  PUAS was originally founded in 1911 as the South American Postal Union to encourage the improvement of postal services.  The US joined the union in 1922. 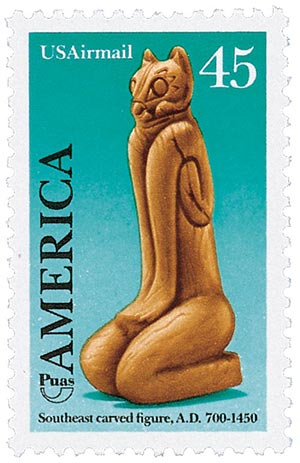 In 1985, the PUAS congress approved the America Series – a multi-year, multi-national series in which the participating nations would issue stamps with themes relating to America.  The purpose of the series was to honor the 500th anniversary of Christopher Columbus’ discovery of the New World.  The themes would be: 1989 – pre-Columbian people and their customs, 1990 – natural surroundings seen by discoverers, 1991 – the discovery voyages, and 1992 – the 500th anniversary of the arrival of Christopher Columbus.

In 1988, two USPS officials flew to Havana, Cuba, a country with no diplomatic relations with the US at the time, and whose stamps were embargoed, to discuss the project with other members of the PUAS.  The meeting was intended to coordinate efforts between the nations on design and marketing and to help those countries that had research, design, or printing issues.  Each stamp from each country had to include a special PUAS logo and a stylized posthorn and the word AMERICA larger than the issuing country’s name.  In the Spanish-speaking countries, the logo is UPAE, for Union Postal de las Américas y España. 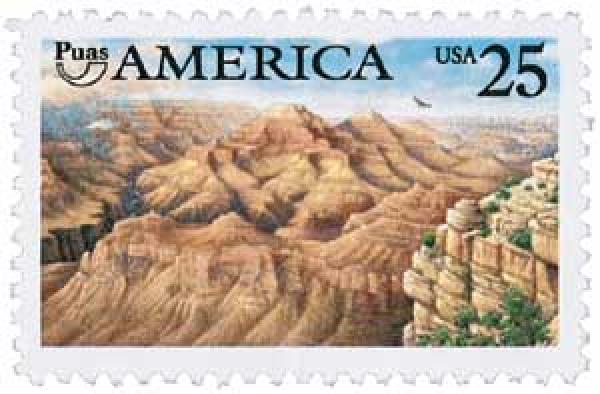 The first stamps in the series issued by the US (#2426 and #C121) were issued on October 12, 1989.  The USPS had planned a first-day ceremony to be held in San Juan, Puerto Rico, but the island had been devastated by Hurricane Hugo weeks before and the ceremony was canceled.  However, stamps were still sold and covers canceled there on that day.  The two US issues were a 25¢ stamp picturing a ceremonial wooden statuette from the Mimbres culture of the American Southwest and a 45¢ airmail picturing the Key Marco Cat, a wooden figure made by the Calusa Indian tribe of southern Florida. 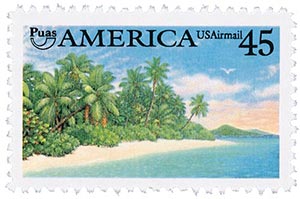 The next stamps in the series were issued exactly one year later, on October 12, 1990, Columbus Day.  The first day ceremony was held at the El Tovar Hotel on the south rim of the Grand Canyon.  The 1990 stamps were a 25¢ commemorative picturing the Grand Canyon and a 45¢ airmail showing a Caribbean coastal scene. 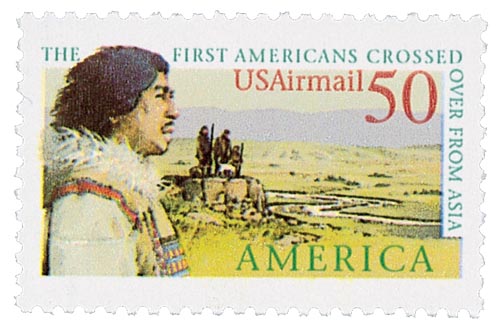 Also in 1990, Portugal joined the union, so it became the Postal Union of the Americas, Spain, and Portugal (PUASP).  And unlike the previous two years, the USPS only issued one airmail for the series in 1991.  The subject of this stamp was “The First Americans Crossed Over from Asia.”  Like the previous stamps, the 1991 issue was released on October 12, this time at the Performing Arts Center in Anchorage, Alaska.  Unlike the previous stamps, the PUAS logo was dropped from the stamp but appeared in the selvage. 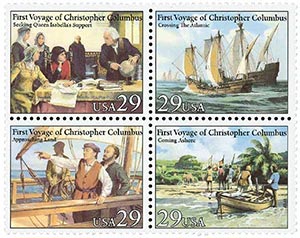 US #2620-23 – Joint issue with Italy honoring the 500th anniversary of Columbus’ arrival.  Click the image to order.

By 1992, USPS interest in the series had waned.  While they did issue a set of four stamps honoring the arrival of Christopher Columbus, the stamps and selvage had no mention of PUAS and didn’t include the large AMERICA wording.  The 1992 block was also a joint issue with Italy.

Click here to get all the America series stamps or First Day Covers in one convenient set.  (Item #TDIH101217)

Facebook
This entry was posted in October 2019, This Day in History. Bookmark the permalink.
Click here to cancel reply.