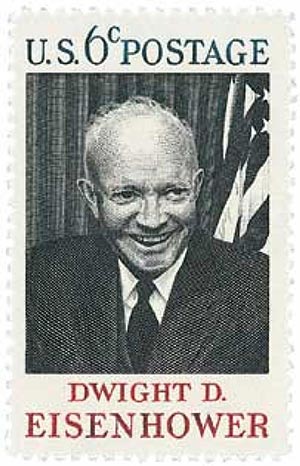 US #1383 was issued five months after Eisenhower’s death on what would have been his 79th birthday.  Click the image to order.

Born October 14, 1890, in Denison, Texas, Dwight David Eisenhower was the third of seven sons.  He was named David Dwight originally, but his mother later reversed the order of his first and middle names to avoid confusion with his father.  All the sons were nicknamed Ike, but only Dwight kept the name through adulthood.

When Dwight was two years old, the family moved from Texas to Abilene, Kansas, the town Eisenhower considered home.  After graduating from high school in 1909, Eisenhower began working at a creamery to pay for college.  When he discovered he could attend West Point Military Academy for free, he decided to apply and was accepted.

Eisenhower enjoyed the traditions of the military academy and the opportunity to play sports.  Academics proved more challenging, but he graduated in the middle of the class of 1915.  Eisenhower and his fellow graduates have been called “the class the stars fell on” because 59 members became generals.

Lieutenant Eisenhower began his military service in Texas.  While there, he met Mamie Doud and they were married on July 1, 1916.  When America entered World War I, Eisenhower hoped to get an overseas assignment but remained stateside.  Despite not participating in combat, Eisenhower’s experience as an organizer and leader would serve him well in the future.  After the war, Ike was promoted to major and worked with tank units, as he had during the conflict. 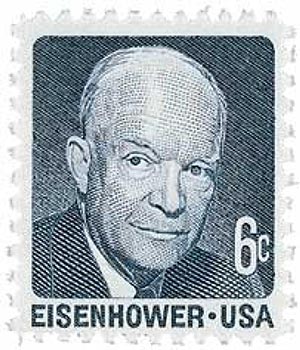 US #1393 – Eisenhower was honored on this Regular Issue stamp. Click the image to order.

Eisenhower finally got his chance to experience combat when the US entered World War II.  In June 1942, he was sent to London to command the European theater.  The following November he led Operation Torch, which pushed the Axis powers out of North Africa and cleared the way for the invasion of Italy.

Now a four-star general, Eisenhower was appointed the supreme commander of the Allied Expeditionary Force.  In this role, he planned much of Operation Overlord, which was intended to free Western Europe from the Nazis.  The invasion of Normandy was key to the success of the rest of the campaign and the eventual surrender of Germany.

Eisenhower returned to the US after serving as the military governor of the US occupation zone in Germany.  In 1948, he became president of New York’s Columbia University.  However, he was absent for much of his tenure, serving as the supreme commander of the newly formed North Atlantic Treaty Organization (NATO).  In an effort to stop the growing influence of the USSR, NATO military forces were formed in Europe with Eisenhower in command.  He held this position until he retired from active military service in 1952.  He then returned to Columbia to resume his responsibilities as president of the university. 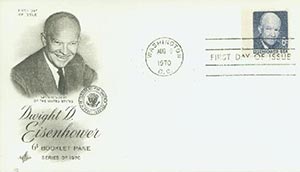 The newly retired major soon became a candidate for US president.  At 62, he would be the oldest man to be elected to the office up to that time.  Though he had not aligned himself with any political party in the past, Ike declared himself a Republican.  After winning the Republican bid, Eisenhower campaigned with the slogan “I Like Ike.”  He promised to go to Korea and end the war, stop the spread of the Soviet Union’s influence, and clean up the government.  In November 1952, Eisenhower defeated Democratic opponent Adlai Stevenson to become the first Republican in the White House in 20 years.

Shortly after winning the election, Ike fulfilled a campaign promise and visited Korea.  The Korean War had already cost 33,629 American lives, and 103,284 had been wounded – yet no settlement was in sight.  As president, Eisenhower threatened China with increased force and the possibility of a nuclear attack. 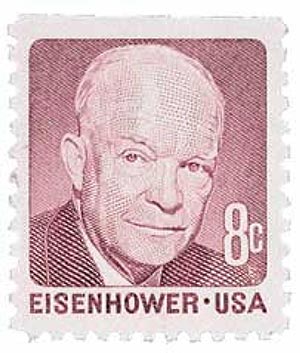 Peace negotiations in Korea began to make progress, and the communists accepted the United Nations’ proposals.  An exchange of sick and injured prisoners of war was held to show good faith.  Eisenhower changed America’s political rhetoric by accepting a limited victory in Korea.  The armistice that brought an end to the terrible fighting in Korea was signed on July 27, 1953.

In an effort to slow the nuclear arms race, Eisenhower brought forth the idea of using atomic energy for peaceful means in a speech before the United Nations.  The entire world was captivated by the proposal.  Soviet ambassadors met with US officials in Washington DC and at a “Big Four” meeting in January.  As a result, the International Atomic Energy Agency was created.

Since his work on the Transcontinental Motor Convoy in 1919, Eisenhower knew America needed a better highway system.  During the Cold War, the necessity became more pressing.  As president, he supported the Federal Aid Highway Act of 1956, which funded an interstate highway system.  Ike felt it would provide more efficient evacuation routes in case of attack and better access for the military. 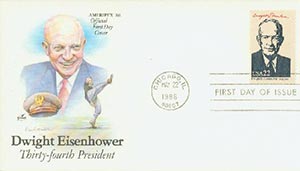 When Eisenhower was elected, he considered serving only one term.  Because of his popularity, the Republicans convinced him to run for a second term.  Once again, Eisenhower faced Adlai Stevenson and won the 1956 election by a greater margin than the previous time.  During his second term, Ike faced domestic issues in addition to international conflicts.

Eisenhower favored a logical, step-by-step process for eliminating racial discrimination in America.  He had completed the integration of the military that began during Truman’s administration.  The cautious approach had to be set aside due to a crisis in Arkansas.  In September 1957, Arkansas Governor Orval Faubus defied a federal court order to integrate Little Rock Central High School.  Faubus even ordered the state’s National Guard to prevent black students from entering the school.  Eisenhower reacted swiftly by placing the National Guard under federal control, then sending a regular Army unit, the 101st Airborne Division, to enforce the court order.  The president then addressed the nation on TV stating that he had acted to prevent further civil disorder.

The spotlight was taken off domestic issues when the Soviet Union launched the world’s first artificial satellite, Sputnik I, on October 4, 1957.  A larger satellite, Sputnik II, which carried a dog, was launched on November 3, 1957.  The American public was shocked by this display of superior Soviet technology.  These advancements were taken as a sign that the Soviets might have the technology to use long-range missiles to hit the United States with nuclear weapons.

US #2513 – Issued for Ike’s 100th birthday, this stamp shows him as a WWII general plus his official White House portrait. Click the image to order.

Eisenhower reacted by supporting two expensive plans that went against his usual cost-cutting beliefs: a program to catch up with the Soviets in space technology, and a federal assistance program to support science education.  Soon America’s space program enjoyed its first success; on January 31, 1958, the US satellite Explorer I was placed into orbit.

Ike left office in January 1961, the first president required by the 22nd Amendment to leave office after two terms.  Although his administration had been heavily criticized, Ike was still very popular with the American people.  When he left office, Congress restored him to his rank of general in the army.  He retired to his farm in Gettysburg, Pennsylvania.  There he devoted himself to raising cattle and writing his memoirs – of which there were three.  After suffering a series of heart attacks, Eisenhower died of heart failure on March 28, 1969.  He was buried in Abilene, Kansas. A library housing his papers was opened a short time later there.