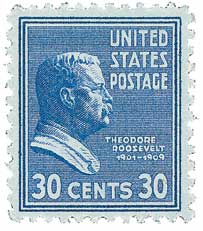 That tour brought Roosevelt to Milwaukee, Wisconsin on October 14, 1912. Just after 8:00 that evening, Roosevelt left the Gilpatrick Hotel, and waved to the crowd as he rode in his open-top car. Suddenly, a flash lit up the night. The former President had been shot in the chest from just a few feet away. His stenographer quickly wrestled the shooter to the ground and crowd attacked the man, shouting to kill him. Roosevelt asked to have the man brought before him so he could ask why. When the man refused to answer, Roosevelt said to give him to the police. 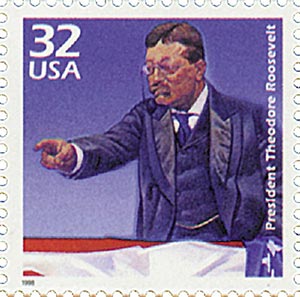 U.S. #3182b – Though Roosevelt lost the election he came in second with 27% of the vote, the most of a third party candidate.

Roosevelt then checked his breathing and reached inside his jacket to feel the wound, discovering it hadn’t hit his lungs. Lucky for Roosevelt, his heavy coat, eyeglass case, and thick manuscript slowed the bullet. His doctor instructed the driver to go straight to the hospital, but Roosevelt insisted, “You get me to that speech.”

Roosevelt didn’t hide the fact that he’d been shot from his audience. He told them outright, showed his blood-stained shirt, and the speech that had a bullet hole in it. Roosevelt admitted that the long speech that padded his chest, had likely saved his life. He went on to speak for ninety minutes, with his aides nervously standing near the podium in case he collapsed. Once his speech was over, Roosevelt agreed to go to the hospital. The doctors decided that it would be more dangerous to remove the bullet, so it remained in his chest for the rest of his life.

Roosevelt’s shooter, 36-year-old unemployed saloonkeeper John Schrank, was found to be insane and committed to a state asylum. Schrank carried a note in his pocket on the day of the shooting with a message to the American people. He claimed he’d had a dream that President McKinley (who’d died by an assassin’s bullet 11 years earlier) called Roosevelt his murderer and told him to avenge his death. Schrank also said he attempted to take Roosevelt’s life to defend the two-term tradition of American presidents.