US #2176 from the Great Americans Series. Click the image to order.

Howe was born on May 27, 1819, in New York City, New York to a stockbroker and poet.  She received an education from private tutors and attended schools for young ladies until she was 16.  One of her brothers traveled to Europe and brought home a library of books that opened her eyes to the world outside of her father’s Calvinist teachings.

In 1843, Howe married physician and reformer Samuel Gridley Howe, with whom she had six children.  In her own time, Howe attended lectures, learned foreign languages, and wrote her own plays and stories.  Many of her works were published, though they angered her husband, as they often criticized the role of women in society.

In November 1861, Howe and her husband visited Washington, DC.  After meeting with President Lincoln, Howe attended a public review of Union troops outside Washington.  Among the soldiers was Thomas Bishop, who had joined the Massachusetts militia.  Bishop had put together a set of lyrics entitled “John Brown’s Body,” which became a walking song set to the tune of a campfire spiritual, named “Canaan’s Happy Shore” by William Steffe. 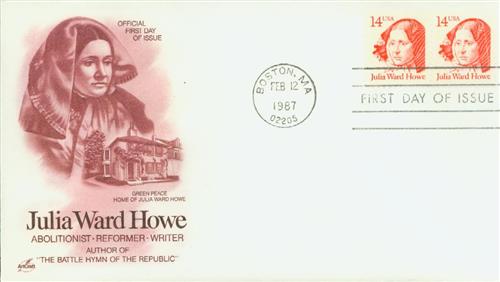 Howe awoke in the middle of the night with lyrics for the tune half-composed in her mind.  Scribbling in near darkness, she wrote what would become “The Battle Hymn of the Republic.”  After being published in the February 1862 issue of the Atlantic Monthly, Howe’s hymn became one of the most popular songs in the Union during the Civil War.  (Click here to see the original printing of the song.) 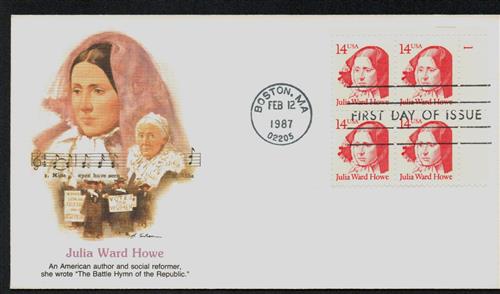 The song, which connects judgment day and the wicked to the Civil War, was published with five verses.  A sixth verse was not published originally and is less commonly known.  As a result of the song’s success, Howe became the first woman elected to the American Academy of Arts and Letters. 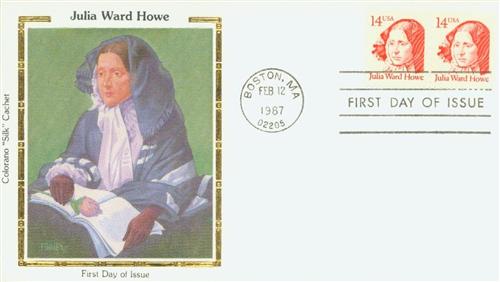 Following the war, Howe went on to become a writer, lecturer, and social reformer for women’s rights.  She helped found and served as president of several suffrage groups, including the New England Women’s Club, the New England Woman Suffrage Association, the Association for the Advancement of Women, the General Federation of Women’s Clubs, and the American Woman Suffrage Association.  Howe served as editor of the suffragist magazine, Woman’s Journal for 20 years.  She also issued an “Appeal to womanhood throughout the world,” which encouraged women from around the globe to strive for world peace. 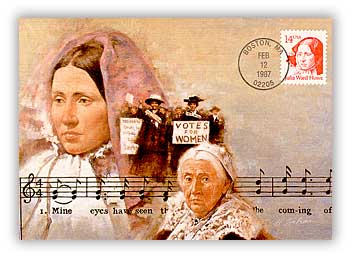 Howe battled pneumonia and died from it on October 17, 1910, in Portsmouth, Rhode Island.  At her funeral, a group of 4,000 people sang “Battle Hymn of the Republic.”  After her death, her children wrote a biography about her that won a Pulitzer Prize.  She was also posthumously inducted into the Songwriters Hall of Fame and the National Women’s Hall of Fame.