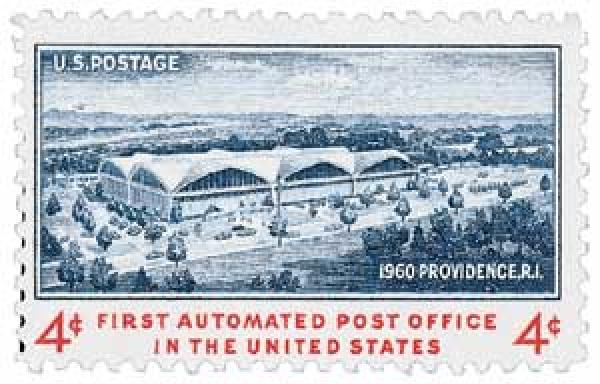 By the mid-1950s, post offices around the country were dealing with a massive amount of mail that they struggled to keep up with using their traditional systems. In 1958, Postmaster General Arthur Summerfield approved the construction of the first fully automated post office in the country in Providence, Rhode Island.

The construction broke ground on April 2, 1959. The project planners had a number of obstacles to overcome. They needed to create machines to quickly and efficiently cull and assemble each kind and class of mail, plus face, sort, and cancel it by priority, as well as separate it out by destination. The project was dubbed Operation Turnkey because the post office would be able to process mail with the “turn of a key.”

Get all the stamps and covers on this page in one convenient set. Click the image to order. 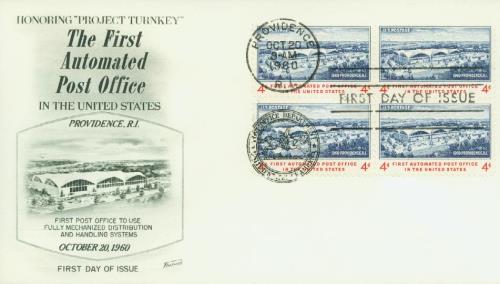 Earlier in 1960, it was suggested that a stamp be issued to honor this tremendous first.  The Citizen’s Stamp Advisory Committee rejected it, as they thought it was self-serving and would be unpopular as many blamed automation for increased unemployment.  In the end, the postmaster general decided to issue the stamp anyway.

US #1489-98 was issued for Postal Week in 1973 to emphasize the important duties of America’s postal workers.

The stamp was issued on October 20, 1960, the same day the post office officially opened for business.  The stamp turned out to be quite popular – with over 833,000 stamps and 458,000 First Day Covers sold on the first day.  This success would later inspire the US Post Office to issue more stamps with postal themes, such as the 1963 City Mail Delivery stamp, the 1971 USPS logo stamp, and the 1974 Postal Service Employees Set. 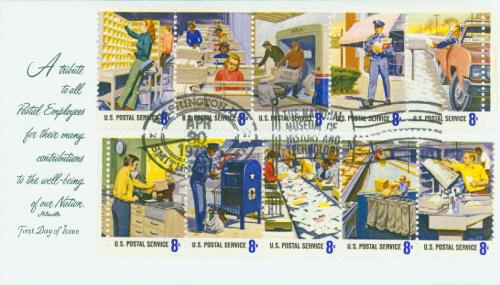 The post office itself wasn’t quite as successful right from the start.  It turned out it wasn’t processing the mail fast enough for the area, with some machines not being used to their full potential and others not being used at all.  Plus, the employees also didn’t get fully trained for some of the machines, leading them to malfunction.  In spite of this, the post office continued to experiment with automation, leading several other cities to adopt similar technology.  Over the years, new advancements helped improve the automation process, which has been adopted in most of the nation’s post offices today.

Facebook
This entry was posted in October 2019, This Day in History. Bookmark the permalink.
Click here to cancel reply.