Launch of the USS Constitution 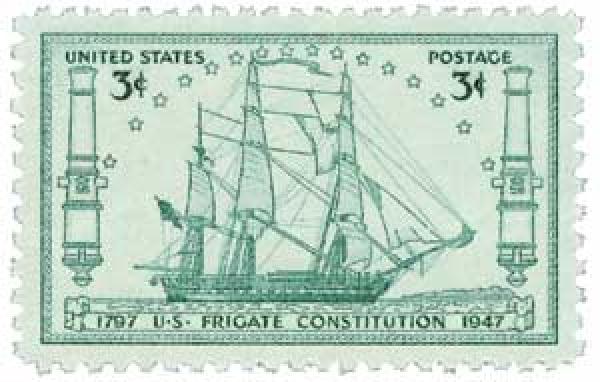 After the Revolutionary War ended, the U.S. disbanded the Continental Navy. And with no extra money to pay for ship repairs, they sold all their warships. But not long after, in 1785, Barbary Pirates in the Mediterranean began capturing American merchant ships.

Click the image to get all the stamps and covers on this page in one convenient, money-saving set.

Thomas Jefferson, then Minister to France, suggest that the U.S. create a naval force to protect America’s shipping interests. Similarly, John Jay suggested the construction of five 40-gun warships. However, both of their suggestions were largely ignored. To the benefit of the U.S., Portugal began to blockade Algerian ships, giving the American merchants some short-term protection. 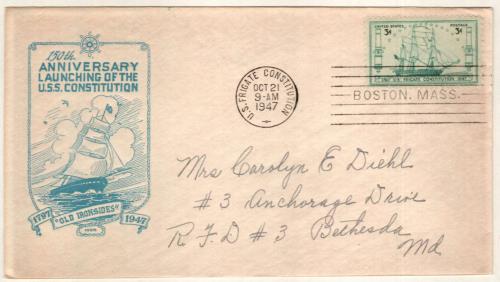 To make the issue even more difficult, the British began intercepting American ships out of fear they were trading with France, and French ships did the same thing concerned that these ships were trading with the British. Then in 1793, Portugal and Algeria signed a peace agreement that ended the blockade. The pirates once again began capturing U.S. merchant ships. By the end of 1793, 11 U.S. ships were captured.

As a result, President George Washington decided it was time to protect these ships and requested Congress to create a navy. On January 2, 1794, the House of Representatives voted 46-44 to build a navy. After passing the House and Senate, Washington signed the Naval Act of 1794 into law on March 27. The act called for the acquisition or construction of four 40-gun ships and two 36-gun ships. 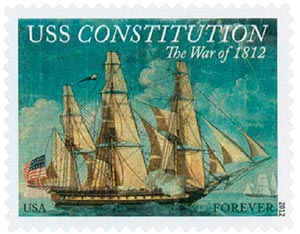 U.S. #4703 was issued for the 200th anniversary of the Constitution‘s War of 1812 battle with the Guerriere. Click the image to read about the battle.

Among those ships was the 44-gun Constitution, named by President Washington. The Constitution and other frigates had an unusual design for the time – they were long and narrow with greater hull strength. The Constitution was laid down in Boston on November 1, 1794, and constructed of pine and oak. 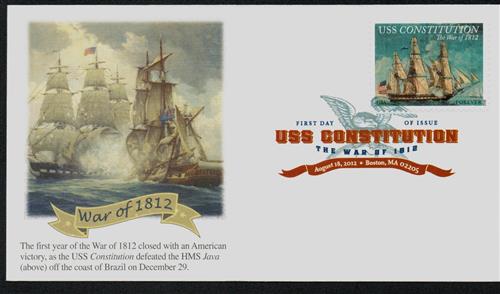 Then in 1796, the U.S. signed a peace accord with Algiers, which according to the act of 1794, halted construction on the ships. In the end, Congress decided to finish the three ships closest to completion– the United States, Constellation, and Constitution. The Constitution was initially to be launched on September 20, 1797. With President John Adams in attendance, the ship was launched, but didn’t make it all the way into the water. The ways (or ramps) had to be rebuilt, and the Constitution was finally officially launched on October 21, 1797. To celebrate, Captain James Sever broke a bottle of Madeira wine on the bow. 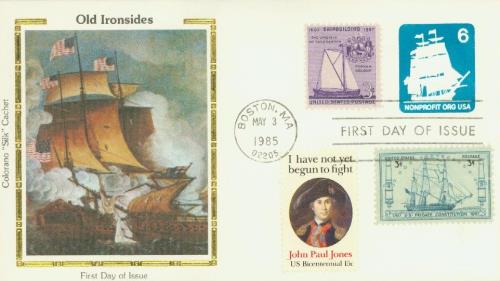 The Constitution would go on to have a long and distinguished career, protecting merchant ships in the Quasi-War, fighting Barbary pirates in the First Barbary War, battling the British in the War of 1812 (when she earned the nickname “Old Ironsides”), and serving as a training and museum ship. The Constitution is still afloat today as a museum ship in Boston. You can read more about the ship’s history here.