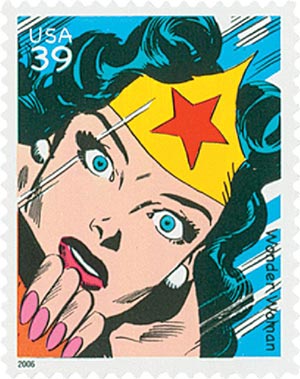 US #4084c was part of a sheet honoring several DC Comics superheroes. Click the image to order.

As the world was at war in the early 1940s, comic books came under fire for promoting violence.  While some called for comics to be banned, one man saw an opportunity to improve comics and empower young girls, with the wise and mighty Wonder Woman. 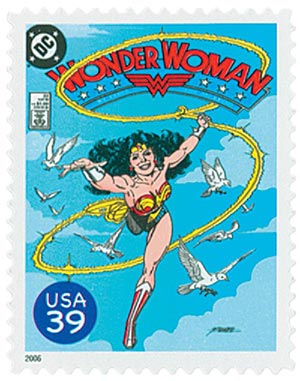 US #4084m is also from that DC Comics sheet. Click the image to order.

That man was psychologist William M. Marston.  In response to the outcry, Marston published his own thoughts in an article in Family Circle magazine.  In his article, he said he saw “great educational potential in comics.”  Marston’s article got the attention of comics publisher Max Gaines, who encouraged him to develop a new character.  At his wife’s suggestion, Marston chose to create a female superhero.  However, even though she possessed Superman’s strength, she would resolve her problems with love instead of her fists.

And so, on October 21, 1941, Wonder Woman made her debut in All Star Comics #8.  She then made her first cover appearance a month later on Sensation Comics #1 and received her very own comic later in 1942.  Wonder Woman displayed a more compassionate and less violent side of superheroes and served as a role model for young girls. 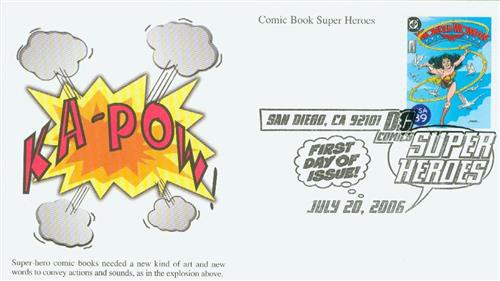 By the end of the 1940s, many comics had been canceled.  But Wonder Woman endured.  In fact, in the early days of the Silver Age (1956–70), Wonder Woman was one of just three DC superheroes to have their own comic (the others being Batman and Superman).  Though comics in general may have waned in popularity, Wonder Woman was still a force to be reckoned with, both on and off the page. 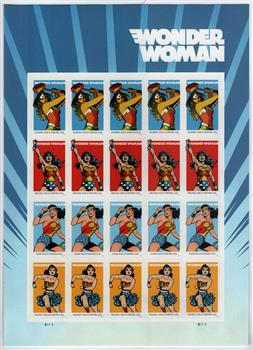 US #5149-52 were issued to honor Wonder Woman’s 75th anniversary. Click the image to order.

During the Silver Age, Wonder Woman lost her powers.  Though she was still a symbol of strength without her powers, some were angry that they had been taken away.  Among them was journalist Gloria Steinem.  Steinem led a successful campaign to have Wonder Woman’s powers restored, featuring her on the cover of the first issue of her magazine, Ms. D.C.  Comics heard these cries and the super-powered-warrior Wonder Woman returned in the comics of the Bronze Age.

One of the most notable events of Wonder Woman’s history from the 1970s was the popular television show, which ran from 1975 to 1979.  The show was so well received that certain aspects from it were brought into the comics – most famously, the way Diana Prince spun to transform into Wonder Woman. 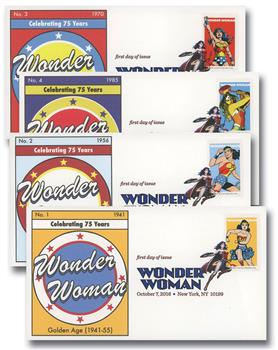 Today, Wonder Woman is one of the world’s most popular superheroes, appearing in a variety of media.  In 2016, Wonder Woman made her big-screen debut.  She currently holds the record for the longest-running female comic book series.