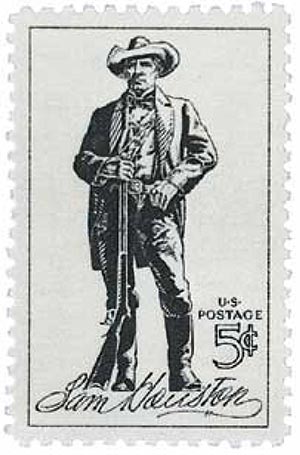 U.S. #1242 – As president, much of Houston’s energy was focused on finance and keeping peace with Native Americans and Mexico.

On October 22, 1836, Sam Houston became the first elected president of the Republic of Texas.

Following the Louisiana Purchase, France had made claims from Texas all the way to the Rio Grande. A treaty in 1819 fixed the southern boundary of the Louisiana Territory at the Sabine and Red rivers. Mexico became independent of Spain in 1821, and Texas became part of the Empire (and later Republic) of Mexico.

U.S. #776 – This Texas centennial stamp honors three of Texas’ most famous names – the Alamo, Am Houston, and Stephen Austin.

Moses Austin obtained permission from Spanish officials to establish an American colony in Texas in 1820. The colony grew rapidly and soon more Americans received land grants from Mexico. However, the Mexican government became concerned over the high percentage of Americans living in its territory. In 1830, Mexico officially halted American immigration, and relations quickly deteriorated. In 1834, a Mexican politician and soldier, General Antonio López de Santa Anna, took over the Mexican government and established himself as dictator. A year later, Texas declared its independence from Mexico. 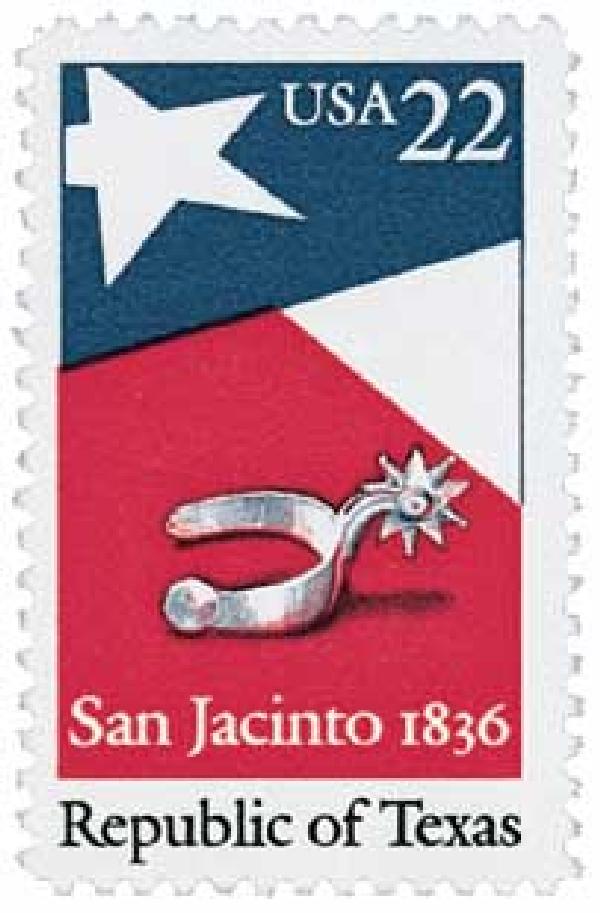 After a few clashes between Texans and Mexican soldiers, Texas leaders organized a temporary government on November 3, 1835. Texas troops captured San Antonio on December 11, 1835. Enraged, Santa Anna sent a large army to San Antonio to put and end to the uprising. Texan forces withdrew to the walls of the Alamo. From February 23, to March 6, 1836, Santa Anna’s forces attacked the fort until it finally fell apart. Many famous men died while defending the Alamo, including Jim Bowie, Davy Crockett, and William B. Travis. On March 27th, Santa Anna ordered 330 Texan rebels executed after they surrendered at Goliad. Rather than crush the independence movement, these actions galvanized Texan resolve. Texans rallied to the cries “Remember the Alamo” and “Remember Goliad.” On April 21, Sam Houston led a smaller Texan army against Santa Anna’s forces in a surprise attack at the Battle of San Jacinto. Houston captured Santa Anna and crushed his army. Texas had won its independence.

Among the first orders of business was the government, specifically electing a president. Henry Smith and Stephen F. Austin (who helped create the first successful American colony in Texas) were the first two candidates to run. Austin believed himself to be the front runner. Then, 11 days before the election, Samuel Houston, Commander-in-Chief of the Texian Army, announced his candidacy. Houston won the September 5 election by a landslide – with 76 percent of the vote. He was inaugurated on October 22, and remained in office for two years. He later served another term as the third president of Texas between 1841 and 1844.

Early on, Texans also voted to join the United States. They remained independent for 10 years before being admitted to the Union on December 29, 1845, which sparked the Mexican War. Mexico surrendered in 1848 and ended all of its claims to Texas and much of the Southwest.