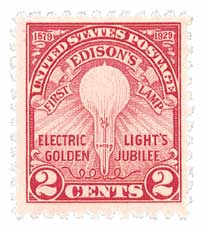 U.S. #654 was issued for the 50th anniversary of Edison’s invention.

On October 22, 1879, Thomas Edison staged his first successful test of an electric light bulb with a carbon filament.

Contrary to popular belief, Edison didn’t invent the light bulb. Dozens of inventors over several decades made their own versions, creating the basis for Edison’s light.

One of the first men to develop an incandescent light was Humphry Davy. In 1802 he used a massive battery, running a current through platinum, to create an incandescent light. While it wasn’t a bright light and didn’t shine for long, it proved the idea of creating light through heat was possible. 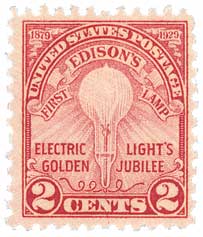 James Bowman Lindsay is sometimes credited as the inventor of the incandescent light bulb. In 1835 he demonstrated an electric light in Scotland and said he could “read a book at a distance of one and a half feet.” However, he believed he had created the perfect light and discontinued work on it to focus on wireless telegraphy.

Warren de la Rue created a light with a coiled platinum filament in a vacuum tube in 1840. His work was centered on platinum’s high melting point, which allowed it to work at high temperatures. Additionally, the evacuated chamber he created had fewer gas molecules, which would make the light burn longer. While his light worked, platinum was too expensive of a material to make his light realistic for commercial use. 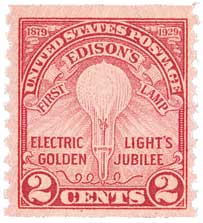 Other early inventors who worked on the light bulb include Jean Eugene Robert-Houdin, who displayed his lights in France and Alexander Lodygin, who received Russian and American patents. His American patents were for lights with a wide range of filaments: chromium, iridium, rhodium, ruthenium, osmium, molybdenum and tungsten.

British scientist Joseph Swan began his work on the light bulb in 1850. His early experiments revolved around carbonized paper filaments in an evacuated glass bulb. While his lights worked, he didn’t have a good vacuum, so they didn’t stay lit for long. He then began working with Charles Stearn, an expert in vacuums. In December 1878, Swan demonstrated his light using a thin carbon rod. While his light was successful, it also wasn’t commercially viable because it required large conductors. He went on to develop “parchmentised thread” from cotton in 1880. His house was then the first in the world to be lit by a light bulb and later hydroelectric power.

By 1878, Thomas Edison had been working as an inventor for over 10 years. Up to that point he’d invented an electrical vote recorder, improved stock tickers and telegraphs, and invented the first phonograph. Then in the summer of 1878, he turned his attention to light bulbs, hoping to create the first practical incandescent bulb that could be sold commercially. He first files his first patent for “Improvement in Electric Lights” on October 14, 1878. Edison first tested carbon and platinum, and then a host of other materials including celluloid, cedar, coconut hair, fishing line, and cotton soaked in boiling tar. He conducted some 2,000 tests that ultimately led him to his success – a carbonized thread of cotton.

Then on October 22, 1879, Edison tested his latest version of the incandescent light with the carbonized cotton thread. And it burned for 13-and-a-half hours at a brightness equivalent to 33 candles.   Even though this was the first successful and commercially viable test of an incandescent light bulb, Edison improved further on his design before filing for a patent for it on November 4. His patent described an electric lamp using “a carbon filament or strip coiled and connected … to platina contact wires.” While his patent included several ways of creating a carbon filament using “cotton and linen thread, wood splints, papers coiled in various ways,” Edison later found that carbonized bamboo could last for over 1200 hours. 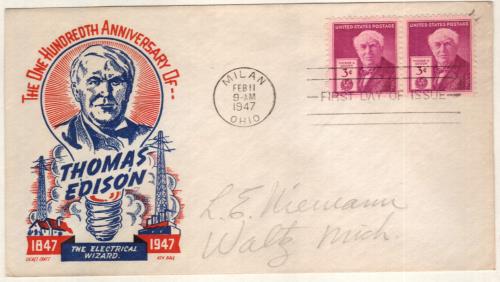 At the end of the year, on December 31, 1879, Edison held the first public demonstration of his new light in Menlo Park, New Jersey. People were so excited to see it that the Pennsylvania Railroad Company staged special trips for the occasion. Edison announced “We will make electricity so cheap that only the rich will burn candles.”

The following year Edison installed his lights on the SS Columbia steamship, marking the first commercial use of his lights after his Menlo Park demonstration. Within 10 years he formed his own company, the Edison Electric Light Company.