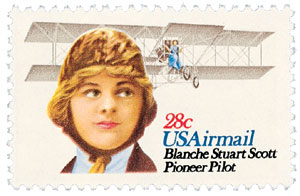 Blanche Stuart Scott was born on April 8, 1884, in Rochester, New York.  An adventurous tomboy from a young age, she would take her father’s car out for joy rides when she was just 13 years old.  Her parents hoped to “cure” her tomboy habits and sent her to finishing school, though it had little effect. 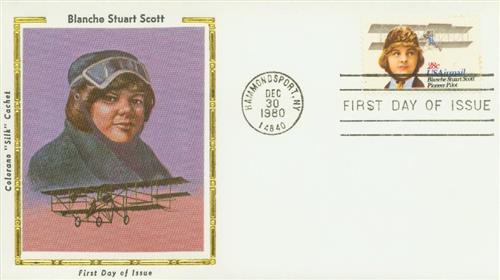 In 1910, Scott received a sponsorship from the Willys-Overland Motors car company to take a cross-country drive from New York City to San Francisco.  In the custom-made car, Lady Overland, Scott completed the trip in 67 days.  She was the second woman to ever complete the trip. 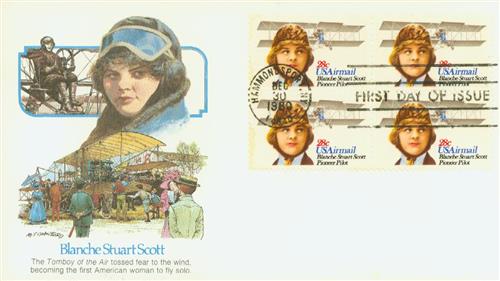 Scott’s road trip earned the attention of aviator Glenn Curtiss.  Curtiss offered to give her flying lessons, and she would be the only woman to receive lessons from him.  On September 6, 1910, as she was practicing taxiing on the ground, a gust of wind lifted her biplane 40 feet off the ground.  For this, she is sometimes honored as the first woman to pilot an airplane alone in the United States.  Bessica Medlar Raiche’s flight on September 16 was the first accredited by the Aeronautical Society of America. 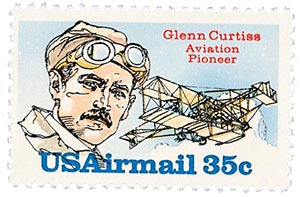 US #C100 was issued on the same day as the Blanche Scott stamp.

On October 23, 1910, Scott made her first public flight as part of the Glenn Curtiss Exhibition Team in Fort Wayne, Indiana.  It’s uncertain exactly what she did that day.  A newspaper report claimed she flew across the field and landed immediately.  Scott later recalled that she circled the field eight times before landing.  According to most reports, she flew about 12 feet above the ground, because the show’s promoters didn’t want people outside of the grounds to get a free show. 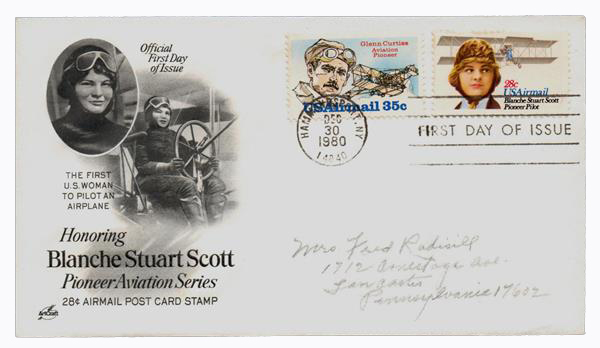 Scott became known as the “Tomboy of the Air” and quickly became a professional pilot.  She soon became an accomplished stunt pilot, flying upside down and performing “Death Dives” from 4,000 feet.  She achieved another feat in 1911, becoming the first American woman to fly long-distance.  She flew 10 miles in July and 25 miles in August.

For the next five years, Scott flew on the daredevil circuit, but she retired in 1916.  She reportedly stopped flying as a statement against gender discrimination in aviation at the time – women could not be engineers or mechanics. 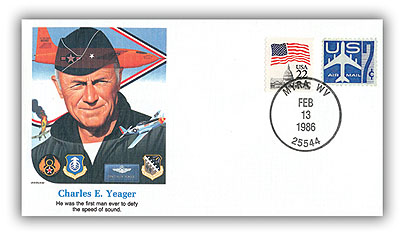 In the 1930s, Scott worked as a scriptwriter for RKO, Universal Studios, and Warner Brothers.  She wrote, produced, and performed on radio shows.  On September 6, 1948, she became the first woman to ride in a jet – a TF-80C piloted by Chuck Yeager.  In 1954, she was hired by the US Air Force Museum to help them find early aviation items for their collection.