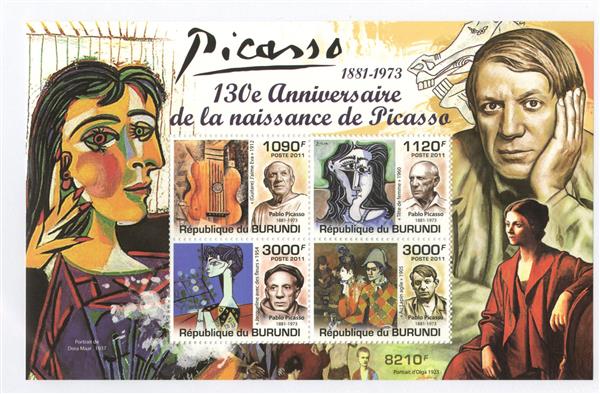 The son of a painter, Picasso showed a talent for art from an early age.  When he was seven, his father gave him formal drawing and painting lessons.  Soon, Picasso was so occupied with his art, it distracted him from his schoolwork. 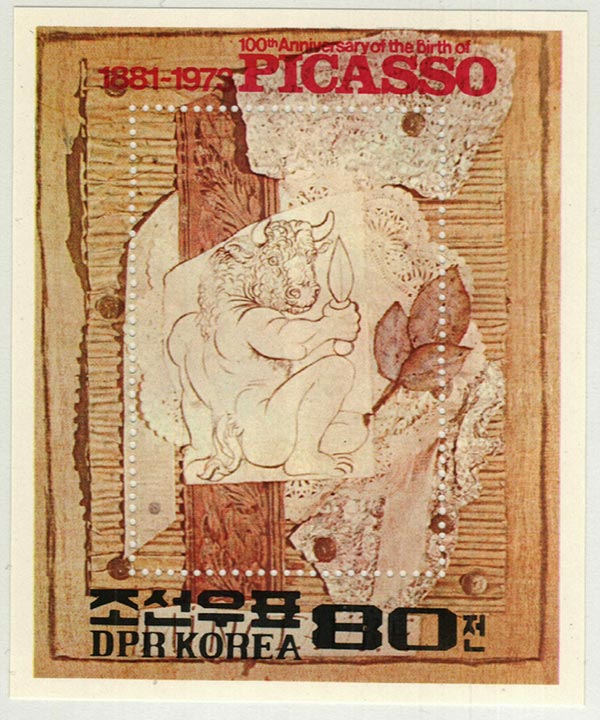 In 1895, Picasso’s family moved to Barcelona where his father took a job at the School of Fine Arts.  His father convinced the school to allow him to take an entrance exam for the advanced class.  While it normally took a month to complete, Picasso completed it in a week and he was admitted at the age of 13.

When he was 16, Picasso briefly attended the Real Academia de Bellas Artes de San Fernando in Madrid, but didn’t like the formal style and left shortly after arriving.  However, he greatly enjoyed Madrid and the opportunity to see the works of Diego Velázquez, Francisco Goya, Francisco Zurbarán, and El Greco. 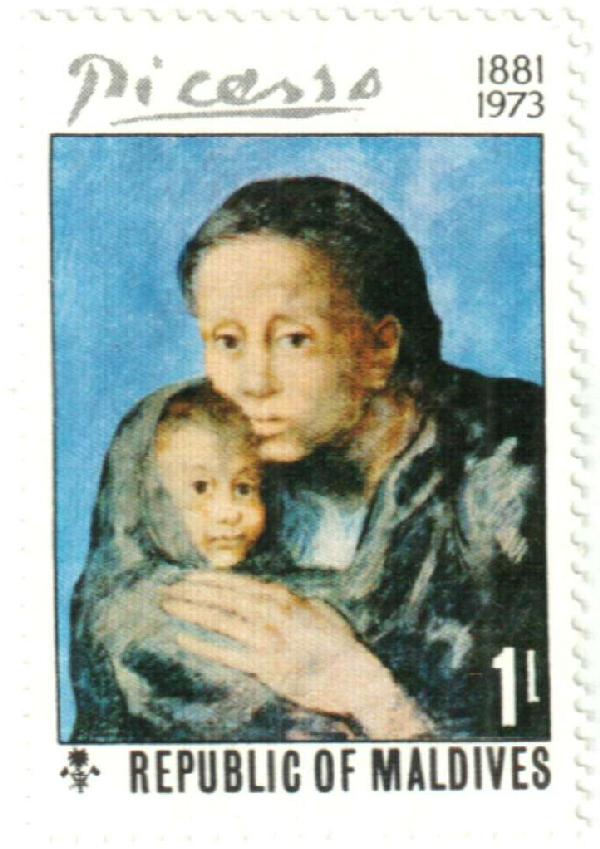 Maldive Islands #489 was issued the year after Picasso died.

Picasso first went to Paris in 1900.  There he lived with a roommate and often burned his works to warm their apartment.  In 1901, Picasso embarked on his Blue Period, painting scenes that were almost entirely green and blue with only occasional warm colors.  Many pictured gaunt mothers and children and beggars.  After this, he entered his Rose Period from 1904 to 1906.  Many of these paintings used orange and pink and pictured circus people, acrobats, and harlequins.  During this time he also met Gertrude Stein, who was one of his greatest supporters and collected many of his works. 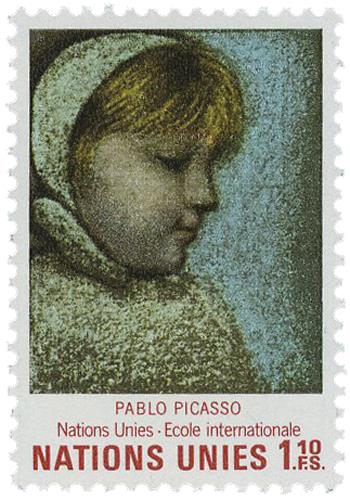 United Nations #UNG21 – This painting was included on this stamp with Picasso’s permission in 1971.

From 1907 to 1909, Picasso explored African Art and primitivism.  The ideas he explored during this period led Picasso to develop analytic cubism with Georges Braque.  In this practice, Picasso would take apart objects and analyze their shapes.  In turn, this led him to synthetic cubism from 1912 to 1919.  In producing these works, he would often include pieces of wallpaper or newspaper in his paintings, in some of the earliest examples of collage in fine art.

During World War I, Picasso remained in Paris and continued to paint, though his works had a somber tone.  After the war, he befriended a rich art dealer, who introduced him to the rich social life of 1920s Paris.  During this time Picasso also helped Igor Stravinsky create the ballet Pulcinella. 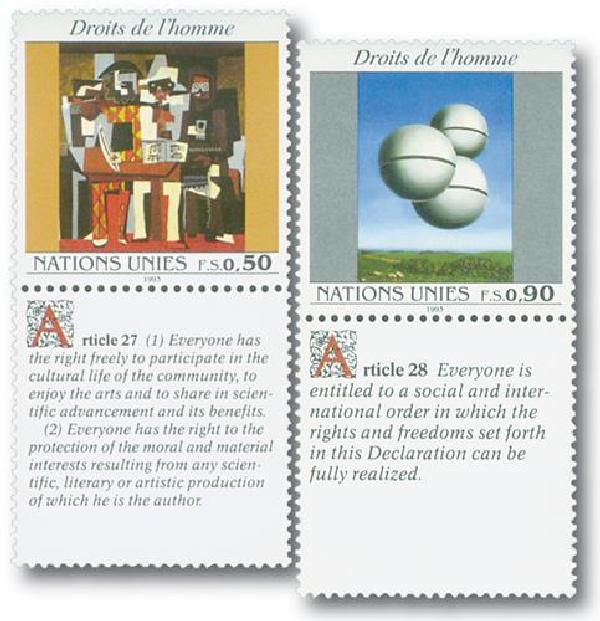 Throughout the 1920s, Picasso, like many other European artists of the time, began producing neoclassical works, in what some called a “return to order.”  Many of these works rejected extreme avant-garde styles and instead took their inspiration from traditional art.  Later in this period, Picasso began to explore surrealism, renewing his interest in primitivism.

Up until the 1930s, the Harlequin was a common symbol in Picasso’s work.  As he started to associate with surrealists however, he started using the Minotaur, a symbol common in their works.  The Minotaur appears in one of his most famous works, Guernica.  Picasso was commissioned by Spanish rulers of the time to create a mural for the Spanish display at the Paris International Exposition at the 1937 World’s Fair.  Guernica depicts the German Luftwaffe bombing of the town of Guernica that claimed 1,650 civilian lives. 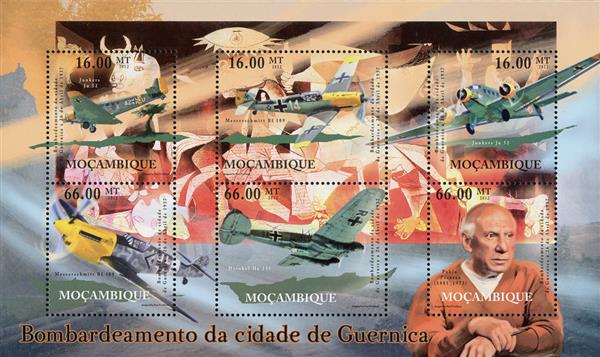 Item #M12145 pictures Guernica and the German planes that attacked the town.

In 1939, Picasso’s work was displayed at the Museum of Modern Art in New York City, which helped to make him better known in America.  During World War II, he remained in Paris while it was under German control.  He continued to paint and also wrote poetry. 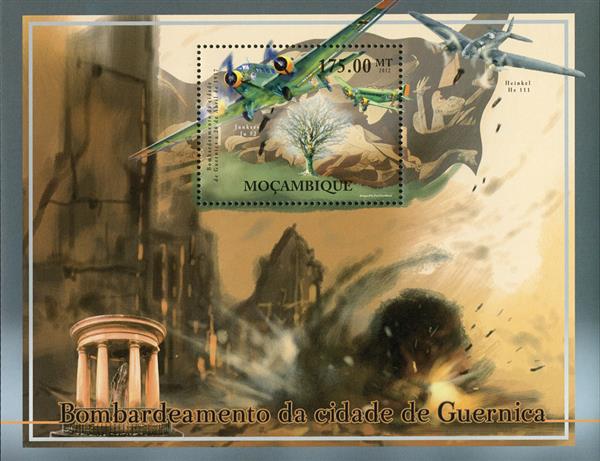 Item #M12146 was issued for the 75th anniversary of Guernica.

By the 1950s, Picasso was an international celebrity.  He appeared in a few films and continued to paint and sculpt.  In 1967, he produced a 50-foot sculpture, Chicago Picasso, which stands in downtown Chicago.  He refused to be paid for it and donated it to the people of the city.  Picasso continued to work up until his death on April 8, 1973.