Ali Wins the “Rumble in the Jungle”

On October 30, 1974, Muhammad Ali faced off against heavyweight boxing champion George Foreman in the “Rumble in the Jungle.”

Muhammad Ali was born Cassius Marcellus Clay, Jr., on January 17, 1942. He started boxing when he was 12 years old and became a talented fighter, winning six Kentucky Golden Glove titles, two national Golden Glove titles, and a gold medal in the 1960 Olympics, all before turning professional.

Though Cassius Clay boxed as a heavyweight, he was light on his feet and avoided punches from slower competitors. In his first three years of fighting professionally he had a record of 19 wins and no losses. During this time, he started taunting his opponents before the match with rhymes about his skill.

In 1964, a fight was scheduled with champion Sonny Liston. Before the match, Clay made his famous “float like a butterfly, sting like a bee” claim and called Liston “the big ugly bear.” Cassius Clay won the match in the seventh round and became the youngest boxer to take the heavyweight title from a reigning champion. Before the rematch in May 1965, Clay converted to Islam and changed his name to Muhammad Ali. He beat Liston in the first round by knockout. 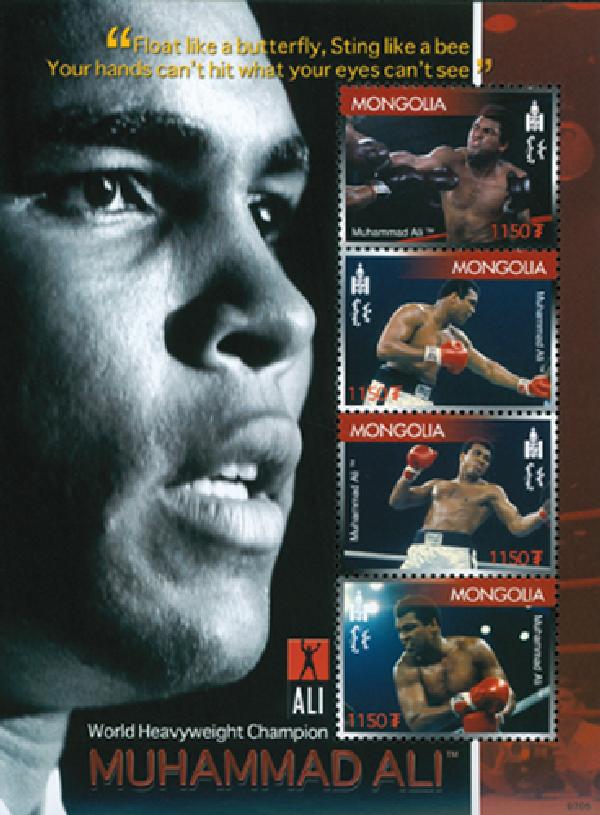 In another match, billed as the “Fight of the Century,” Ali took on undefeated challenger Joe Frazier on March 8, 1971. After 15 rounds, Frazier handed Ali the first defeat of his professional career. Though, Ali won a rematch fought on January 28, 1974. Ali and Frazier’s third and final match was dubbed “The Thrilla in Manila,” which was held in the Philippines. Ali won this fight, too.

On October 30, 1974, Ali faced George Foreman in “The Rumble in the Jungle,” in Zaire (now Congo). Foreman, the champion at the time, was the heavy favorite. Ali used his endurance and a strategy later called “The Rope-A-Dope” to wear out his opponent. In the eighth round, Ali beat Foreman by knockout, recapturing the championship.

During his outstanding career, Muhammad Ali defeated every top heavyweight contender in his era. He was named “Fighter of the Year,” “Sportsman of the Year,” “BBC Sports Personality of the Year,” and received the “Presidential Citizens Medal,” among many other honors.