Riley found inspiration all around him growing up.  His father frequently brought home clients (he was a lawyer) and other disadvantaged people to help them.  Riley used their stories and dialects as the basis for several of his works.  Most notably is his poem “The Raggedy Man,” based on a German tramp his father hired to work in their home. 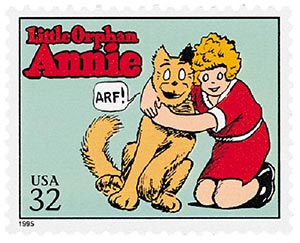 US #3000j from the Comic Strip Classics set. Click image to order.

When Riley was a teenager, his family took in 12-year-old Mary Alice “Allie” Smith, whose father had been killed in the Civil War.  In the evenings, Allie would tell Riley and his siblings stories.  Her stories would later serve as the inspiration for Riley’s poem, Little Orphant Allie.”  A mistake at the printer changed the poem’s title to “Little Orphant Annie.” 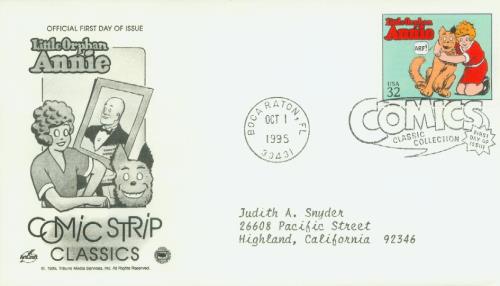 Following his mother’s death in 1870, Riley left his family’s home and worked odd jobs, including painting houses and selling Bibles.  He then opened his own sign business – some of his earliest known poems were advertisements on these signs.  Riley also began submitting his poems to newspapers, the first of which was published in 1872.  For a time, he also joined a company of traveling salesmen, calling himself the “Painter Poet.”  He wrote and performed poetry at these shows and then sold their tonics after his readings.

US #864 was also from the Famous Americans Series. Click image to order.

Though he had some success in advertising, Riley was always drawn back to poetry.  In 1875, he sent some of his work to Henry Wadsworth Longfellow, hoping his endorsement might help him gain greater attention.  Longfellow responded that his work shoed “a true poetic faculty and insight,” and Riley sent copies of the letter with his poems, hoping it would help him get published.  Soon his poems were published in several local newspapers, though he struggled to gain recognition from the larger eastern publications.

In 1878, Riley joined a traveling lecture circuit, which allowed him to read his poems aloud to a captive audience.  His readings were well received and this helped him to gain greater attention.  By 1880, his poems began appearing in national publications and grew increasingly popular.   Riley was also encouraged to start collecting his poems in books, which helped him grow more financially stable. 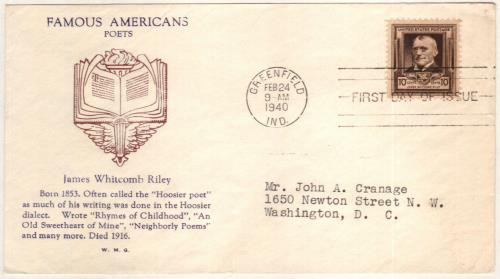 In 1888, Riley was invited to the White House to meet with President Grover Cleveland as part of the International Copyright League.  He spoke about the need for international copyright protection.  His speech moved the president and he was invited back to meet with him privately.  Riley also befriended Benjamin Harrison, who recommended he be named national poet laureate, but congress never acted on the recommendation.

In the 1890s, Riley grew closer to his siblings and their children.  He began to regret never having children and showered his nieces and nephews with gifts.  He also collected his most child-friendly poems in a book called, Rhymes of Childhood, which became his best-selling book.  Based on that success, he became known as the Children’s Poet. 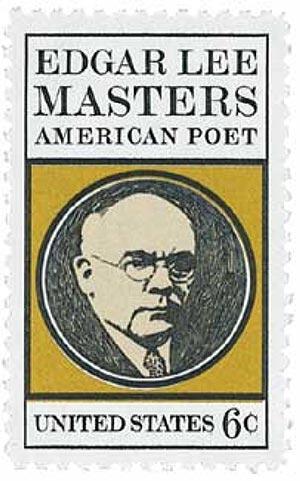 US #1405 – Masters was among the many poets Riley influenced.  Click image to order.

Riley retired from performing in 1895, though he made occasional appearances.  He spoke at Decoration Day events and the unveiling of national monuments in Washington, DC, earning him another nickname, “the National Poet”, as well as “the poet laureate of America” and “the people’s poet laureate.”  In his later years, Riley also received several honorary degrees and was made a member of the National Institute of Arts and Letters.  He also helped several other poets enter the field, including William Allen White, Edgar Lee Masters, and Paul Laurence Dunbar.

Riley’s health began to decline in 1901 and his doctor recommended long periods of rest.  Having been a heavy drinker all his life, this added to his poor health.  He died on July 23, 1916.  He was then just the second person to lie in state in the Indiana Statehouse (after Abraham Lincoln).  More than 35,000 people came to pay their final respects.  Several memorials and buildings were soon named in his honor.  Additionally, his hometown of Greenfield holds an annual festival every October called Riley Days.