Posted on October 8, 2019 by MysticStamp 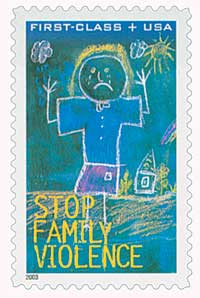 US #B3 – Blias won the international 2003 Asiago Award for Young Artists for this drawing. Click the image to order.

This stamp’s journey began in 1999 when a Denver social worker sent a letter to Colorado Senator Ben Nighthorse Campbell.  The social worker had a large caseload of battered women and abused children.  He suggested that a semi-postal stamp could be issued to help raise funds for victims of domestic violence and to help prevent it in the future.

Campbell supported the idea, having been a cosponsor of the Violence Against Women Act of 1994.  He suggested the stamp’s creation and as an amendment to the Appropriations Bill, it was signed into law as the Stamp Out Violence Act of 2001. 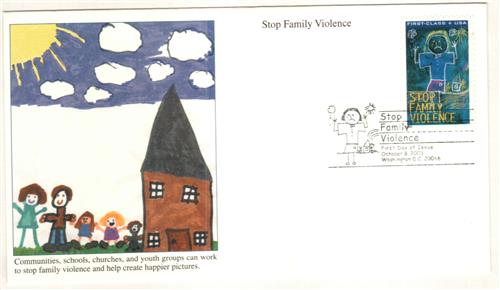 US #B3 – Classic First Day Cover. Click the image to order.

The stamp was originally scheduled to be issued in Denver, Colorado.  President George W. Bush asked that the ceremony be moved to Washington, DC to correspond with his signing of a proclamation declaring October Domestic Violence Awareness Month.  The final confirmation of the location didn’t come until the morning of the issue.  The director of stamp services said, “When the White House decides to lend support for the message and the initiative, it’s pretty important to take them up on the offer.” 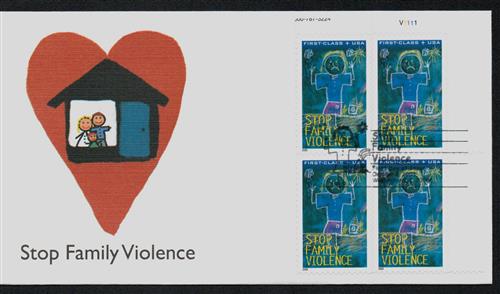 US #B3 – Fleetwood Plate Block First Day Cover. Click the image to order.

Though no denomination was printed on it, the stamp carried a value of 45¢.  Of that, 37¢ paid the first-class postage rate, while 8¢ was allocated for the stamp’s cause.  Funds raised by the sale of this stamp were directed to the Department of Health and Human Services to support programs and organizations fighting domestic violence.  The money raised helped fund programs such as women’s shelters, counseling services, emergency food and clothing, and prevention programs. 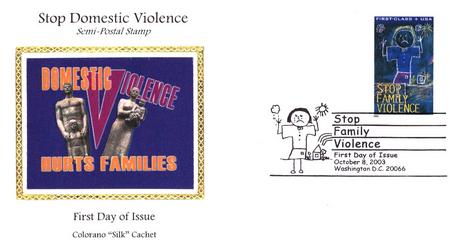 US #B3 – Silk Cachet First Day Cover.  Click the image to order.

The Stop Family Violence stamp remained on sale through December 31, 2006, by which time it raised $3.1 million for its cause.

Click here to read the president’s remarks at the First Day of Issue ceremony for this stamp, which also served as the proclamation of October 2003 as National Domestic Violence Awareness Month.