Posted on October 9, 2019 by MysticStamp

On October 9, 1994, the USPS issued its first joint-issue stamp with China.

The stamps were the 36th US joint issue since the first one with Canada in 1959.  The Chinese collaboration began back in 1990.  That year a Chinese postal delegation visited Washington, DC.  The following year, two USPS officials traveled to China for a weeklong visit in which they discussed a variety of topics, including a joint issue.

USPS officials visited China two more times to discuss the project.  In 1991, they decided that the stamps would focus on wildlife, to prevent any political or controversial objections.  The representatives then narrowed the topic further to endangered species and to also picture flowers.  At one point, they considered American eagles and Chinese pandas or tigers.

However, both nations were already planning panda stamps.  Additionally, the eagle is a bird of prey and the tiger a representation of kingship.  They wanted something to symbolize peace and friendship and ultimately settled on cranes.  The stamps would picture cranes from both countries – the North American whooping crane and the Chinese black-necked crane. 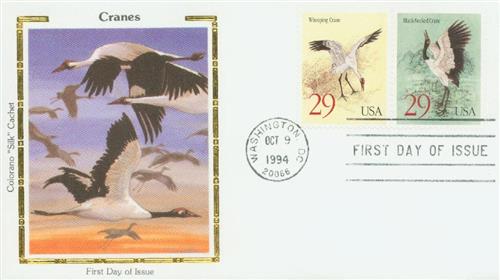 Both nations further agreed to issue two stamps, rather than picturing both cranes together, which wouldn’t naturally happen in nature.  For the stamp designs, both countries agreed to adopt the art of Zhan Gengxi from China, and the layout and typography of US designer Clarence Lee.  The China stamps were issued with two different denominations in separate panes, while the US stamps had the same denomination and were issued as an attached se-tenant. 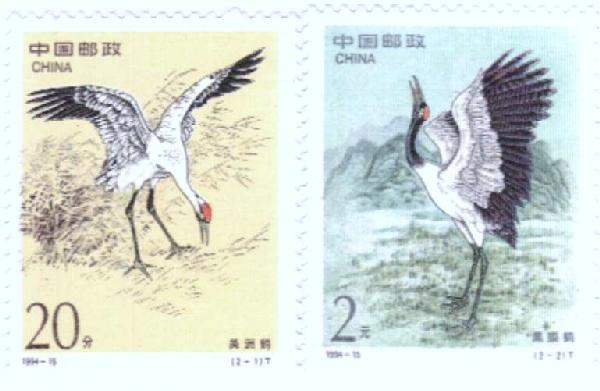 The US and China stamps were issued in special joint-issue ceremonies on October 9, 1994, (World Post Day) in Washington, DC, and Beijing, China.  Both first day ceremonies included representatives from both nations.  The American ceremony was held at the National Postal Museum. 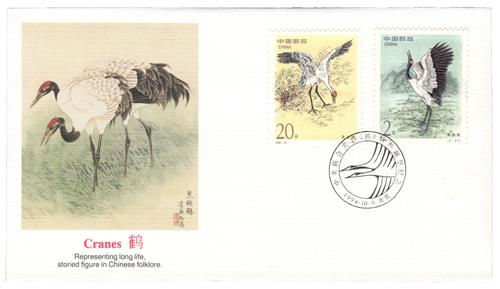