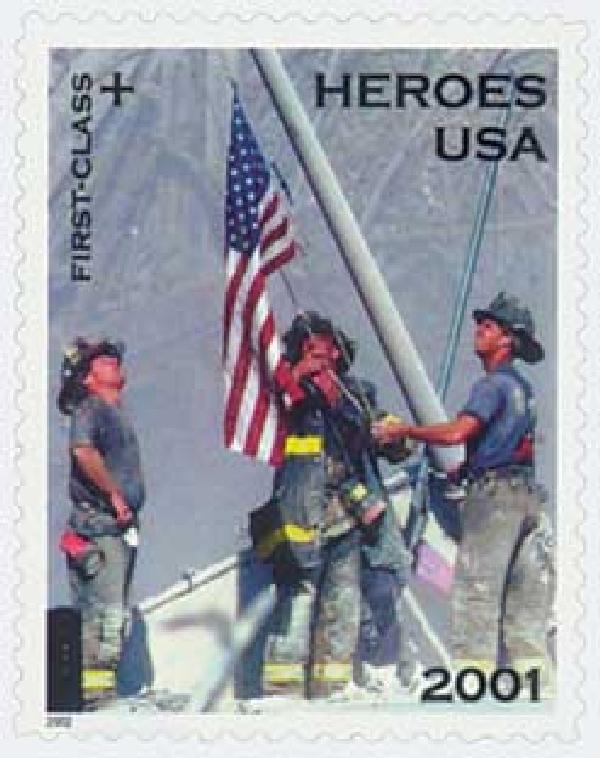 U.S. #B2 – This Semi-postal stamp raised funds to assist the families of emergency relief personnel killed or permanently disabled in the 9/11 terrorist attacks.

At 8:46 a.m. on the morning of September 11, 2001, American Airlines Flight 11 crashed into the North Tower of New York City’s World Trade Center, changing our world forever. Before the day was over, close to 3,000 people would lose their lives, and countless heroes would be made. From that day forward, the term “9/11” would symbolize both disaster and heroics.

One of the most enduring images of the day was captured by photographer Thomas E. Franklin, and is pictured on the U.S. semipostal stamp, #B2.

U.S. #929 – The image of the flag raising at Ground Zero is often compared to the raising of the flag at Iwo Jima, one of the most enduring images of World War II.

By 5 p.m., police, firefighters, and emergency workers had spent much of the day tirelessly searching for survivors. A group of firemen then noticed a U.S. flag waving atop a nearby yacht. Seeing it as a symbol of hope for the brave workers, the three men removed the flag and its pole and raised it at Ground Zero, in the center of the relief efforts. Franklin knew he was witnessing something special and immediately snapped the photo, that went on to grace millions of newspapers and collectibles. It’s often compared to the flag raising at Iwo Jima.

Reportedly, the flag was later taken by officials, signed by Mayor Rudolph Giuliani and George Pataki, and sent to fly aboard American ships serving in Afghanistan. It returned to America the following year and flew in various locations around New York City.

Later in 2002, the owners of the yacht from which the flag was taken wanted to donate it to the Smithsonian. However, when they received the flag, they discovered it was much larger than the one that flew above their yacht. And the firefighters agreed it wasn’t the same flag they had raised on September 11. 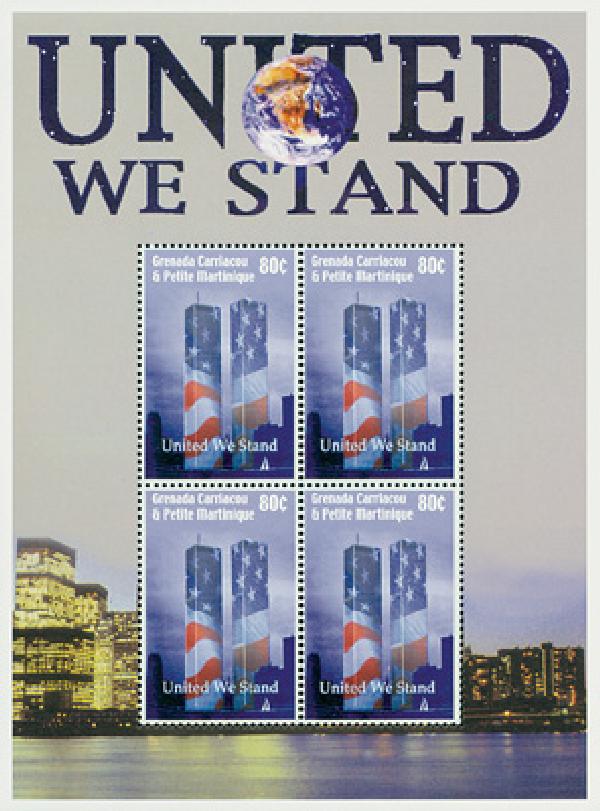 Item #M7367 – Following the attacks, nations around the globe quickly began issuing “United We Stand” stamps, showing their support of the U.S. during this difficult time.

Researchers have looked at photos from later in the night of September 11 and discovered the flag was already missing from its pole by that point. So the flag that was signed and sent to Afghanistan wasn’t the one that flew over Ground Zero in that famous shot. Though it did serve as inspiration to the men and women defending our freedom overseas.

To date, it’s still uncertain where the Ground Zero flag is. Some believe it could have been stolen, simply misplaced, or used to cover a fallen first responder. But the flag’s owners, among others, continue to search for this historic flag that became a symbol of hope for Americans on one of the darkest days in our history.