Born into a distinguished Boston family, Parkman was in poor health as a child and was sent to live with his grandmother in the wilderness in nearby Medford.  During his time there he learned how to hunt and live like a pioneer.  Living there for four years, Parkman developed a love of nature that would later inspire his career as a historian.  Parkman would later say that his books covered “the history of the American forest.”

Parkman entered Harvard College when he was 16 and used his time there to develop a plan for his future as a forest historian.  When he was 20, Parkman spent eight months in Europe.  He explored the Alps and climbed Mount Vesuvius.

US #1297b – Parkman stamp with a precancel. Click image to order.

After graduating, Parkman’s father convinced him to get a law degree, in the hopes it would persuade him to abandon his plans to write about the American wilderness.  At the time, writing about such a topic was taboo, with most scholars focusing on ancient history or the Spanish Empire.  But even after earning his law degree, Parkman was committed to his goal. 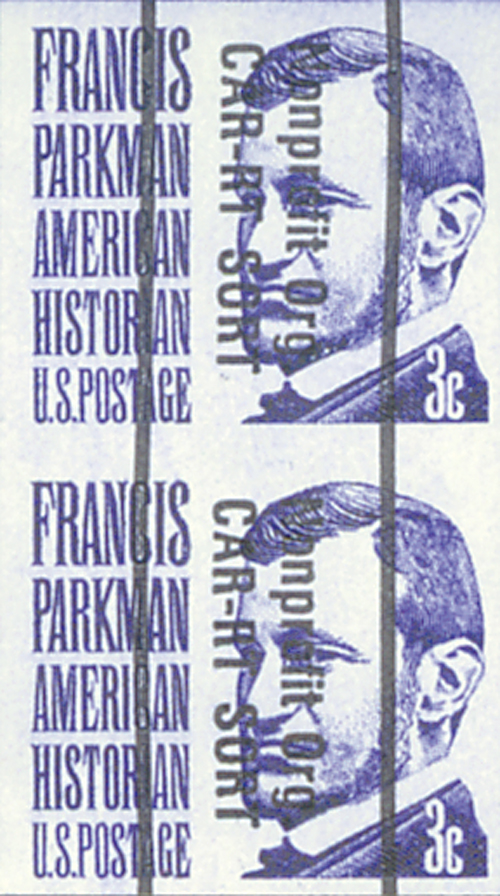 In 1846, Parkman traveled west on a hunting expedition.  During that trip, he spent several weeks living with a Sioux tribe.  Upon returning home Parkman recounted his trip in Knickerbocker Magazine and those stories were then collected in The California and Oregon Trail in 1849.

As he came from a wealthy family, Parkman was able to carry out his research without worrying about money until he began to receive royalties from his books.  He spent a great deal of time researching and traveling across America and to Europe.

In the 1850s and 60s, Parkman became a fellow of the American Academy of Arts and Sciences and a member of the American Antiquarian Society.  After the Civil War, he worked with the Boston Athenæum library to collect Confederate newspapers, broadsides, books, and pamphlets.  This is one of the most extensive of such collections and has been of great use to historians. 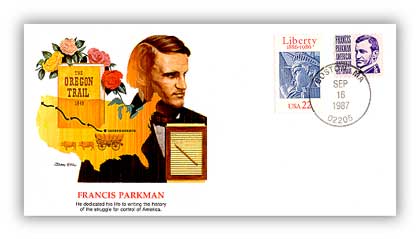 Parkman wrote many well-received books during his career, including History of the Conspiracy of Pontiac, Pioneers of France in the New World, The Jesuits in North America in the Seventeenth Century, La Salle and the Discovery of the Great West, Count Frontenac and New France Under Louis XIV, Montcalm and Wolfe, The Old Régime in Canada, A Half-Century of Conflict, and France and England in North America. 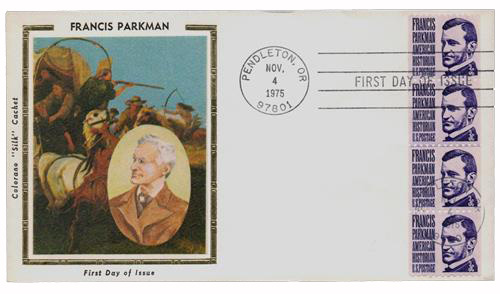 Parkman died on November 8, 1893. His books have often been praised as both useful historical texts and enjoyable literature. The Society for American Historians later named a prize after him, awarded to the best book on American history.