U.S. #2064 – Virginia’s story has inspired a musical, window display at Lord & Taylor, and a scholarship in her name.

“Yes, Virginia, There is a Santa Claus”

In answer to a young girl’s letter to The Sun newspaper, Francis Church wrote one of the most famous editorials of all time.

The story begins with young Virginia O’Hanlon, who asked her father if Santa really exists. Her father suggests that she write to The Sun (now The New York Sun), because if it appeared in that paper, it must be true. So Virginia wrote a letter asking if Santa was real, pointing out that her friends said he wasn’t.

Editor Francis Church received her letter and saw it as an opportunity. He’d served as a correspondent during the Civil War and witnessed the suffering and lack of faith that swept over the nation. Church’s editorial response appeared in The Sun on September 21, 1897 and deeply affected most who read it. His emotional response claimed there was a Santa Claus, and that “he exists as certainly as love and generosity and devotion exist… Alas! how dreary would be the world if there was no Santa Claus. It would be as dreary as if there were no Virginias.” He also stressed that just because no one sees Santa doesn’t mean that he doesn’t exist, stating, “Nobody can conceive or imagine all the wonders there are unseen and unseeable in the world.” 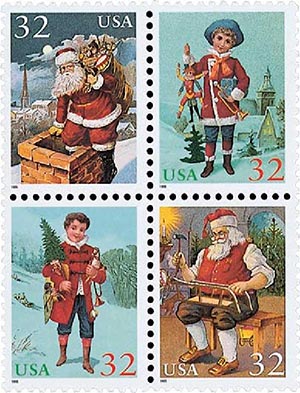 His response spoke to readers on many levels and it went on to become the most reprinted editorial in any newspaper in the English language. It has become the centerpiece of several traditions that continue to this day. It’s read annually at the Yule Log ceremony at Church’s alma mater, Columbia University. It also inspired a childrens book and television special.

Virginia received countless letters about this editorial. She included a copy of the editorial with her responses and said it had positively shaped the rest of her life.

You can view the editorial in its entirety here:
https://commons.wikimedia.org/wiki/File:Yes,Virginia,ThereIsASantaClausClipping.jpg