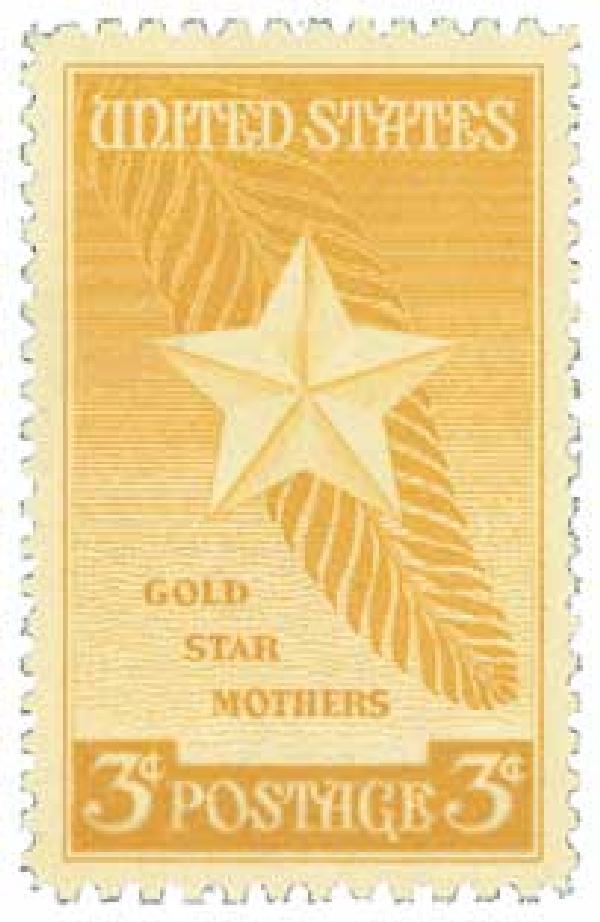 On September 21, 1948, the U.S. Post Office issued the Gold Star Mothers stamp to honor mothers whose sons had been killed in war. It was the first stamp in eight years to feature women (or women’s organizations), and just the 11th stamp overall to do so.

In 1917, Robert Queissner, an Army captain, designed a flag to honor the service of his sons in World War I. The flag had a blue star on a white field, with a red border. It caught on quickly – by September of the same year, Ohio Governor James Cox had adopted it. 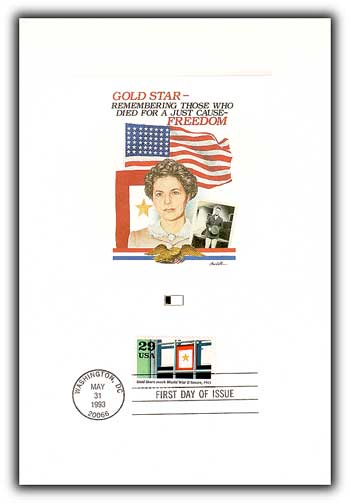 This encouraged a group of women to form the “American War Mothers” group in Indiana, and it rapidly spread. Membership included women who had children serving in the war. The flag took on a somber tone when women whose sons died in the war began to sew a gold star over the blue one.

In May 1918, the Women’s Committee of National Defenses proposed to U.S. President Woodrow Wilson that mothers who had lost a family member to the conflict wear a black band with a gold star. Wilson agreed, and called them “Gold Star Mothers.”

In 1928, a group of 25 mothers met to organize the American Gold Star Mothers, Inc. Open to any mother whose son or daughter has died in the line of duty or from wounds sustained in such service, this organization now has chapters in all fifty states and continues to work closely with all veterans’ organizations.

In 1929, Congress authorized funds to enable Gold Star Mothers to travel to the battlefields of Europe to visit the gravesites of their fallen family members. Over the next three years, 6,692 women made the journey. 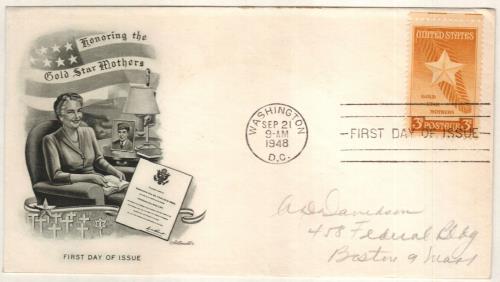 During World War II, women again began to display the blue star flags, often hanging them in a window to indicate a son or daughter was in service overseas. In November 1942, Tom and Alletta Sullivan of Waterloo, Iowa, lost all five of their sons after a Japanese submarine sunk the USS Juneau, on which they all served. 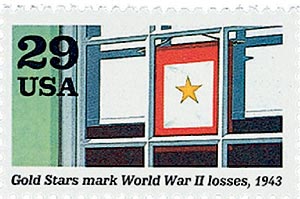 News of the family’s loss made national news. President Franklin Roosevelt sent a letter of condolence, and Pope Pius XII sent a silver religious medal and rosary. Later in 1944, a movie was released called The Sullivans. It was nominated for an Oscar for Best Original Screenplay. Two U.S. Navy ships have been named The Sullivans in honor of the family’s sacrifice. When this stamp was issued on September 21, 1948, the first sheet of stamps was presented to Alletta Sullivan, as a Gold Star Mother. 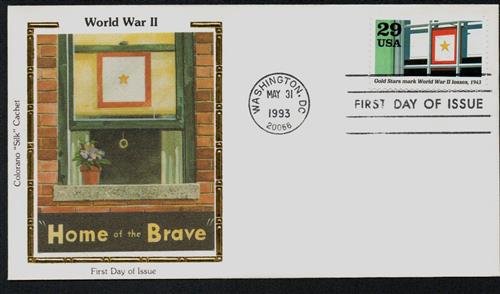