In 1956, the U.S. Post Office began work on a stamp to honor the 200th anniversary of Nassau Hall. The hall is the oldest building on the Princeton University campus and was the largest building in New Jersey at the time it was built. 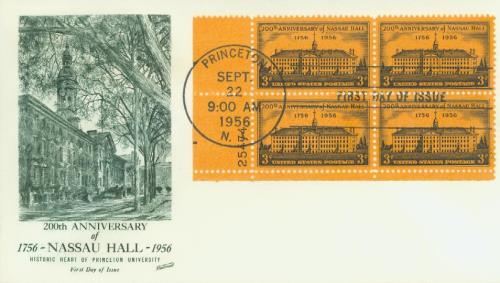 To mark this special occasion, postal officials decided to try something different with this stamp. For the first time ever with a commemorative, they used colored paper. Some previous definitives had been on rag paper that gave them a bluish tint, but the Nassau Hall stamp was quite different. The stamp featured black ink on orange paper – the school’s colors.

The First Day ceremony for the stamp was held at Nassau Hall and the building’s basement was turned into a temporary postal station to cancel thousands of First Day Covers. 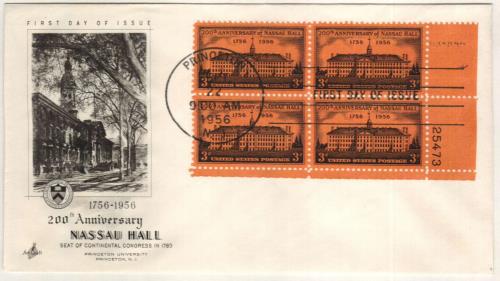 Princeton University was originally founded as the College of New Jersey in 1746. Over the next 10 years, classes were held in Elizabeth and Newark before construction on Nassau Hall was completed. The building was designed by Robert Smith and later remodeled by notable architects Benjamin Latrobe and John Norman. 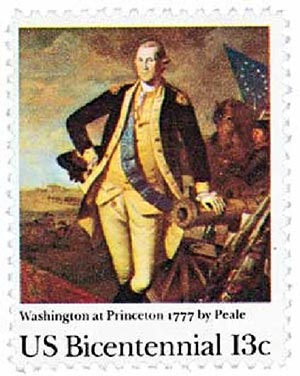 U.S. #1704 – Patriots retook Nassau Hall from the Redcoats during the Battle of Princeton in 1777.

During the American Revolutionary War, Nassau Hall was occupied by both British and Colonial forces. General George Washington captured Nassau Hall, bringing the battle of Princeton to a successful conclusion for the Colonial Army. This victory marked a major turning point in the Revolutionary War.

From July to October in 1783, the Hall hosted the U.S. government, as the Congress of the Confederation met on the second floor. Princeton University notes, “Here Congress congratulated George Washington on his successful termination of the war, received the news of the definitive treaty of peace with Great Britain, and welcomed the first foreign minister – from the Netherlands – accredited to the United States.”

In 1960, Nassau Hall was designated a National Historic Landmark for “its importance in the Revolutionary War and in the history of the United States.” Today, the hall contains the administrative offices of Princeton University.