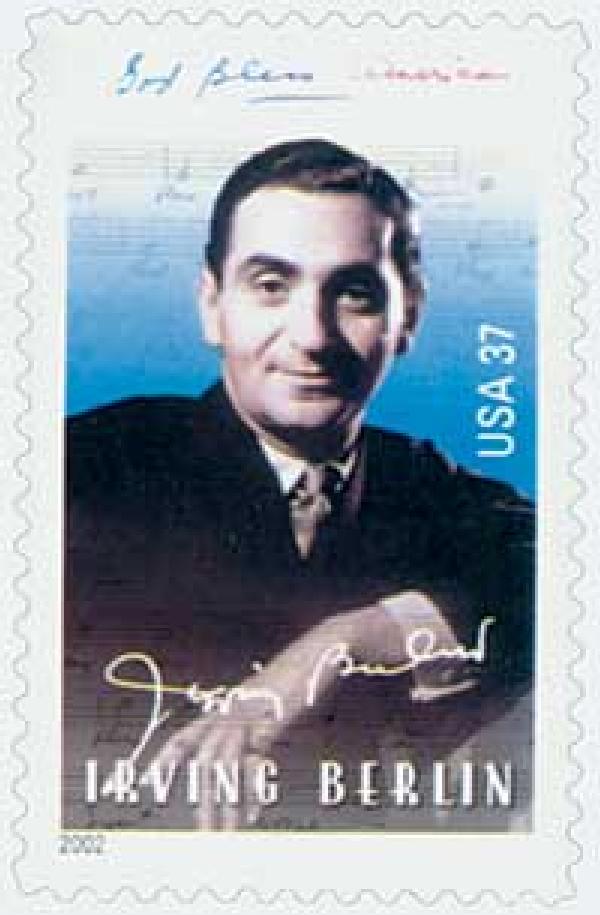 US #3669 pictures Berlin with the score of “God Bless America.”

Berlin was born Israel Beilin on May 23, 1888, in Russia.  He was one of eight children of a Russian-Jewish cantor.  In 1893, his family moved to New York City in search of a better life.

After his father died, Berlin began selling newspapers to help support the family.  He would hear songs from outside the saloons and restaurants and began singing them while selling his papers.  Soon, he found people gave him money for his singing, and he realized he wanted to become a singing waiter.   Though he had little schooling and no formal musical training, he left home to follow his dream and started out singing in restaurants.  By the time he was 18, he got a job as a singing waiter in Chinatown.

Berlin started out singing popular songs but soon started improvising.  In 1907, he published his first song, “Marie from Sunny Italy,” for which he received 37¢ in royalties.  A printer’s error listed his name as “Irving Berlin,” and he kept the name after that. Eventually, Berlin’s restaurant performances earned him the attention of a music publisher and he was hired to write music. 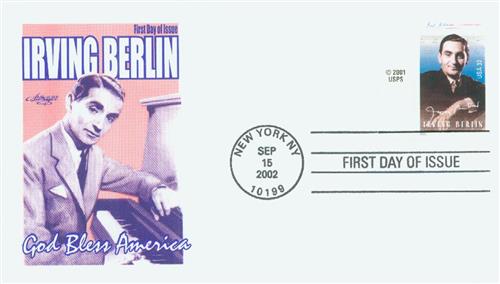 In 1911, Berlin released “Alexander’s Ragtime Band,” which became an international hit. The song started a dance craze in his native Russia, but his music reflected the spirit of his adopted country. Over the years, it would be sung by some of music’s biggest names – Bessie Smith, Louis Armstrong, Bing Crosby, Johnny Mercer, and Al Jolson.  George Gershwin called the song, “the first real American musical work.” 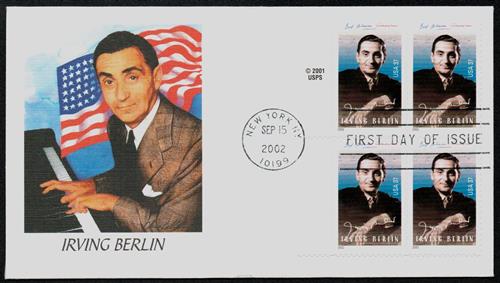 The instant success of that song opened the doors of opportunity to Berlin.  In 1914, he wrote the ragtime revue, “Watch Your Step,” which received rave reviews and was proclaimed a hit on opening night.

In the coming years, Berlin began to abandon ragtime for love songs.  His first ballad, “When I Lost You,” was an instant hit and sold over one million copies. Berlin also began writing songs for the new dance crazes, such as the “grizzly bear,” the “chicken walk,” and the foxtrot, as well as for the Hawaiian dance craze.  At this point, he was writing several new songs every week. 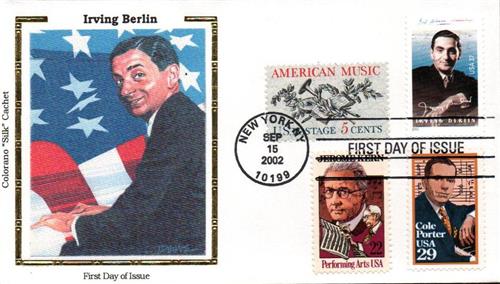 In 1916 Berlin became a US citizen and the following year was drafted into the Army for World War I.  He had already spoken out about the importance of artists supporting the war with inspirational songs, and that’s exactly what the Army wanted him to do.  He wrote “For Your Country and My Country,” “Let’s All Be Americans Now,” and the all-soldier musical revue, “Yip Yip Yaphank.”   The show would raise $150,000 for a camp service center.

Among the songs Berlin wrote for the show but didn’t use was “God Bless America.” He thought it was too patriotic and set it aside. Then, 20 years later, Kate Smith’s manager asked Berlin for a song to mark the 20th anniversary of the end of World War I.  She sang the song on her weekly radio show that year and it lifted a nation weary of depression and became a rallying cry during World War II.  A movement began to make the song America’s national anthem. Berlin donated his royalties from the song to benefit the Boy and Girl Scouts of America.

US #1484 – Composer George Gershwin called Berlin “the greatest songwriter that ever lived.”

In 1943, This Is the Army was released in order to increase the country’s morale during World War II.  The film was based on Berlin’s 1942 Broadway musical by the same name and was directed by Ezra Stone, featuring Berlin himself and future President of the United States Ronald Reagan.  The movie made over nine million dollars, all of which was donated to Army Emergency Relief. In 1955, President Eisenhower awarded Berlin a Congressional Gold Medal for his patriotic musical contributions.

Over the course of his 60-year career, Berlin wrote about 1,500 songs.  He also produced the scores for 19 Broadway shows and 18 Hollywood movies – 18 of his songs were nominated for Academy Awards. Berlin once said he wanted his music to “reach the heart of the average American,” and his legacy shows he did that. Berlin died in his sleep on September 22, 1989.  The lights were dimmed on Broadway the following night in his honor. 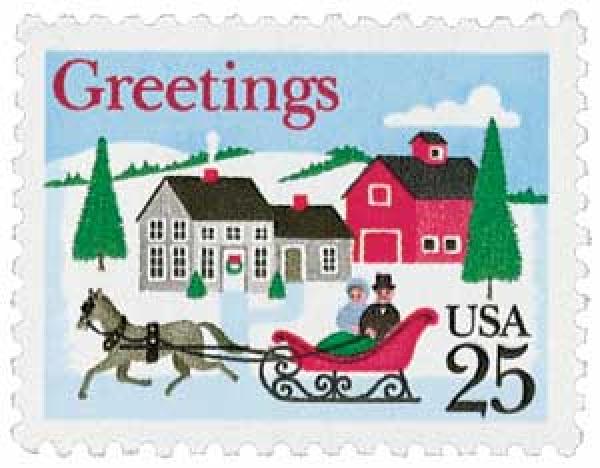 US #2400 was issued to honor Berlin, while he was still alive!

One year before Berlin’s death, US Postmaster General Anthony M. Frank wanted to honor the legendary songwriter on a stamp. However, the USPS rules at the time dictated that anyone other than a president couldn’t be honored on a stamp until 10 years after their death.  So Frank found a way around he rule.  He decided to honor Berlin with that year’s Christmas stamp.  The wintery scene of a house and trees covered in snow was intended to represent Berlin’s “White Christmas.”  Though the stamp didn’t picture or name Berlin, it was issued in Berlin, New Hampshire.  That made it only the second US stamp to honor a living American (after the 1927 Spirit of St. Louis airmail). 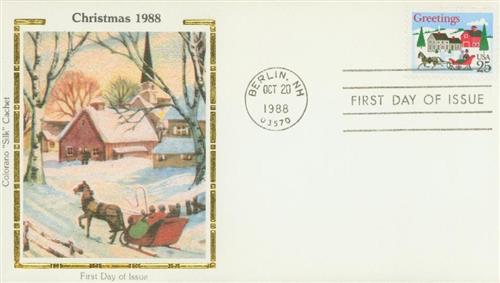