Born into an upper-middle class family, Lippmann attended New York’s Dwight School. He went on to attend Harvard University where he focused on philosophy, German, and French. He graduated in three years and later joined the New York Socialist Party with Sinclair Lewis.

After briefly serving as secretary to George Lunn, mayor of Schenectady, New York, Lippmann began working as a journalist, media critic, and philosopher. He published several books in the coming years, including A Preface to Politics, Drift and Mastery, The Stakes of Diplomacy, The Political Scene, and Liberty and the News. Lippmann was also one of the founding editors of The New Republic Magazine. 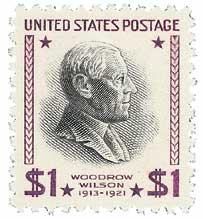 During World War I, Lippmann was made a captain in the Army and joined the intelligence section of the American Expeditionary Forces in France. He was then part of the American Commission to negotiate peace. Returning to America, Lippmann became an advisor to President Woodrow Wilson and helped him write his Fourteen Points speech.

Lippmann closely examined the coverage of the war in American newspapers and was bothered by the large number of inaccuracies and biases that many writers included in their reports. He began to criticize these journalists for making generalizations about other people based on preconceived notions. He coined the term “stereotype” largely based on these observations. 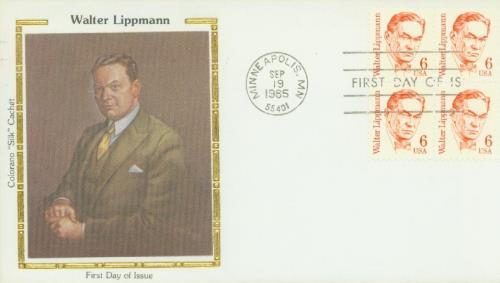 Over the years, Lippmann served as an informal advisor for several other presidents. In 1958 he received a special Pulitzer Prize for journalism for “the wisdom, perception and high sense of responsibility with which he has commented for many years on national and international affairs.” He won another Pulitzer for International reporting four years later for his 1961 interview with Soviet Premier Nikita Krushchev. And in 1964 President Lyndon Johnson awarded him the Presidential Medal of Freedom. 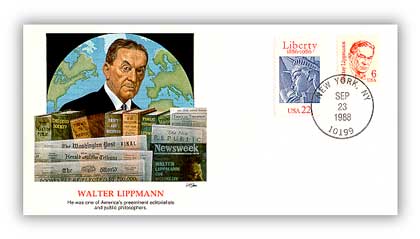 Lippmann died on December 14, 1974, in New York City. As a journalist, Lippmann wrote 26 books and more than 4,000 newspaper columns. He received several other prestigious honors over the years that established him as America’s foremost analyst of social, political, and ethical problems. He’s been called the “most influential journalist” of the 20th century and the Father of Modern Journalism.