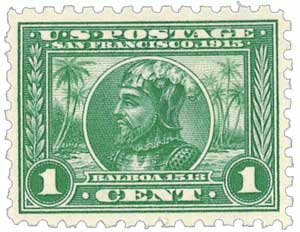 U.S. #401 was issued for the Panama-Pacific Exposition, which honored Balboa’s discovery as well as the construction of the Panama Canal.

Balboa was born in 1475 in Jerez de los Caballeros, Spain. Following Christopher Columbus’ famed voyage to the New World in 1492, Balboa was inspired to become an explorer himself. He made his first voyage to the Americas in 1500 with Rodrigo de Bastidas. However, along the journey their ship was badly damaged and they had no choice but to settle on Hispaniola. Balboa attempted to make a life for himself as a planter and pig farmer, but was ultimately unsuccessful. Unable to pay off his rising debts he conceived a plan to escape the island and his debtors. 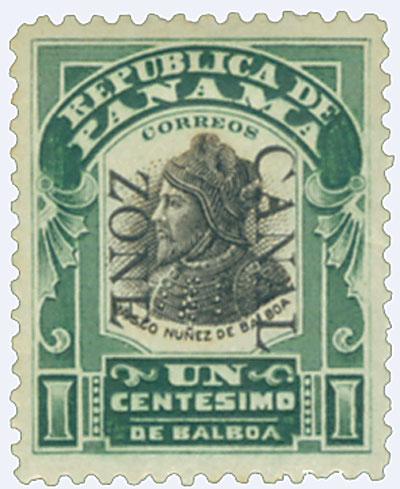 At the same time, a ship was preparing to sail to a recently established Spanish settlement at San Sebastián de Urabá. Balboa and his dog, Leoncico, snuck onto the boat as stowaways and hid in a barrel. The ship’s captain eventually discovered Balboa and threatened to leave him at the first uninhabited island. But since he’d traveled through the area before and had extensive knowledge of it, the captain allowed him to remain on board. 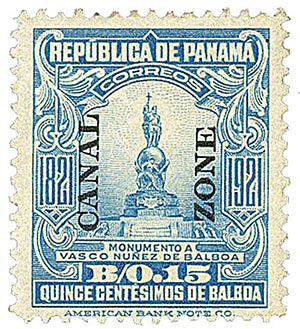 When the ship reached San Sebastián, the crew found island natives who massacred the Spanish settlers had overrun it. The crew believed their mission was a failure, but the charismatic Balboa encouraged them to push on and establish a new colony. They succeeded and in 1511, established Santa María la Antigua del Darién, the first Spanish village in South America. While the man that led the expedition was supposed to be the new village’s mayor, he was extremely unpopular. So Balboa became a spokesman for the people, had the man arrested, and was made the new mayor. He went on to become the governor of Veragua as well.

Balboa now had a significant amount of power, holding authority over all of the Veragua territory. He sent word back to Spain of the situation and asked for more men and supplies. In the meantime he continued his conquest. He fought and befriended various native tribes, later marrying the daughter of a local chief. 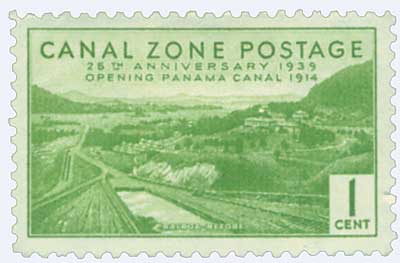 U.S. #CZ120 pictures the town of Balboa before construction of the Panama Canal.

Just by chance Balboa received information that would lead to his most famous discovery. One day while his men fought over gold in front of the natives, one of the locals exclaimed, “If you are so hungry for gold that you leave your lands to cause strife in those of others, I shall show you a province where you can quell this hunger.” He then went on to describe a rich kingdom to the south where they ate and drank from gold plates and goblets. But he warned that they would need at least 1,000 men to take on the tribes on the coast of “the other sea.” Balboa was instantly intrigued by the rich kingdom and began preparations.

Balboa set out on his expedition on September 1, 1513. His requests for additional men were denied, so he crossed the Isthmus of Panama with just 190 Spaniards, a few native guides, and a pack of dogs. They sailed along the coast to a friendly native village where they received 1,000 men and continued on. In the coming weeks, Balboa’s force encountered less friendly tribes and did battle with them. Most of them ultimately joined his ranks. 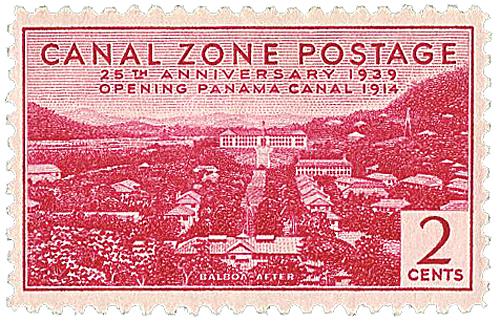 U.S. #CZ121 pictures the town of Balboa after the canal was completed.

After a particularly harsh battle left many of his men wounded, Balboa continued on with a much smaller force. Then on September 25, the natives told him that he could see the large sea if he climbed the mountain along the Chucunaque River. So Balboa and his dog set out that morning and by noon reached the summit. He was moved by the sight of the massive ocean that lay before him. Once the rest of his men met him at the mountaintop, they said a brief prayer, placed stone pyramids and wooden crosses, and named the ocean Mar del Sur, or South Sea. (The Pacific was renamed Mar Pacifico, peaceful sea, in 1521 by Ferdinand Magellan.)

Balboa’s expedition then continued on toward the sea. A few days later some of his men made a brief reconnaissance trip into the ocean, becoming the first Europeans to enter the Pacific from the New World. Balboa himself stepped into the Pacific’s waters a couple days later. He raised his sword and claimed the sea and surrounding lands for Spain.

Balboa eventually returned to Santa Maria and hoped to continue his quest for gold and territory. But in 1519 he was accused as an usurper and for trying to start his own government in the South Sea. He was found guilty and beheaded. He’s been largely honored for his “discovery” of the Pacific and settlement of Panama.