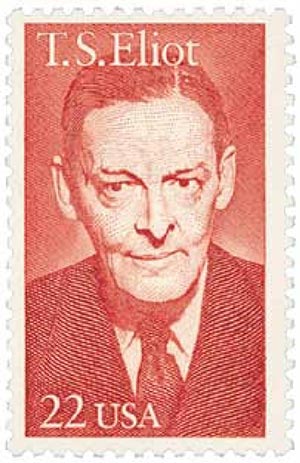 Eliot attended schools in St. Louis and Massachusetts before entering Harvard in 1906. After graduating, he worked at the school for a year as a philosophy assistant before heading to France and England to further study philosophy.

Eliot returned to Harvard to study Indian philosophy and Sanskrit, but was drawn back to England for study. He worked toward earning a Ph.D., but never took his final oral exam. Instead he married and worked in London as a teacher and then a bank clerk.

During this time, Eliot befriended poet Ezra Pound, who instantly recognized his poetic talent and encouraged him and helped to get his work published. Eliot published his first poem of this period in 1915 – “The Love Song of J. Alfred Prufrock.” Two years later he published his first book of poems, Prufrock and Other Observations. The success of this book helped establish Eliot as one of the world’s leading poets of the time. In addition to writing poems and working a regular job, Eliot also wrote literary criticism and reviews that were also well respected. 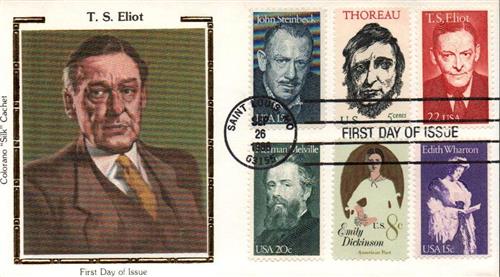 In 1922, Eliot published “The Waste Land,” a long and complex story of postwar disillusionment. “The Waste Land” was instantly recognized throughout the literary world and came to be seen as one of the most influential poems of the 20th century. Eliot was seen as a revolutionary, introducing new subject matter and techniques to poetry. 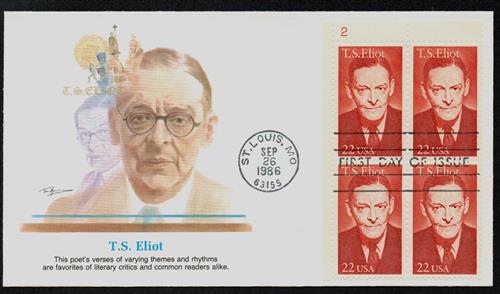 That same year Eliot founded the Criterion literary journal and worked as its editor for 17 years. In 1924 he left his bank job to work for the publishing house Faber and Faber. He would spend the rest of his life there encouraging young poets. Eliot also continued to write his own work. He only published two or three poems a year, demanding that they “should be perfect in their kind, so that each should be an event.”

Eliot became a British citizen in 1927 and converted to Anglicanism, which is reflected in his poem “Ash Wednesday.” During his career Eliot also wrote seven plays, including Murder in the Cathedral and The Cocktail Party. And the beloved play Cats was based on Eliot’s series of 14 poems, “Old Possum’s Book of Practical Cats.” He also won the Nobel Prize in Literature in 1948.

Eliot died of emphysema on January 4, 1965, in London. He is often seen as one of the 20th century’s major poets.