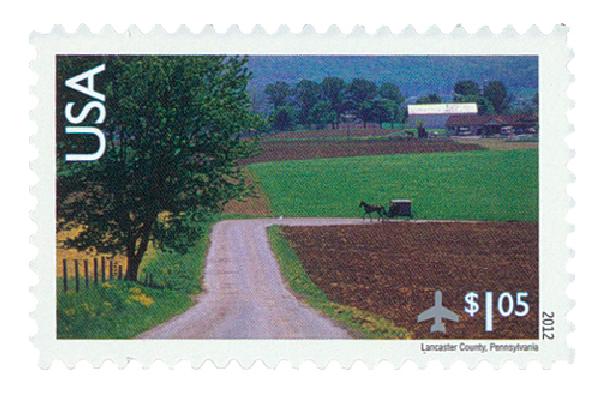 On September 27, 1777, Lancaster, Pennsylvania served as the nation’s capital for a single day.

Leading up to and during the American Revolution, Philadelphia, Pennsylvania was America’s unofficial capital. It was there the Continental Congress first met in 1774 and signed the Declaration of Independence in 1776. It was a bustling trade center and served as headquarters of sorts of the new American government.

U.S. #1044 was supposed to be the last issue in the Liberty Series, but eight more stamps were added.

However, the British recognized the city’s significance and began a campaign to capture it. Their first attempt came in December 1776. As the British closed in on Philadelphia, members of the Continental Congress fled the city for Baltimore, Maryland. There they met at Henry Fite’s tavern, which was later renamed Congress Hall. While there, they learned of Washington’s triumphant crossing of the Delaware and great victories at Trenton and Princeton. Those victories led them to believe Philadelphia was safe, so they reconvened at Independence Hall on March 4, 1777.

However, the British threat to Philadelphia wasn’t over. In August 1777, the British fleet sailed down the east coast from New Jersey to Maryland and landed about 50 miles from Philadelphia. Suspecting the British plans, General George Washington positioned his forces between the two points, at Chadds Ford. He also had troops at several other nearby river crossings. Chadds Ford was the most direct route along the Brandywine River between Baltimore and Philadelphia, and Washington was sure that’s where the British would attack.

U.S. #3403f pictures one of the flags believed to have been carried at Brandywine.

However, the British didn’t intend to attack the Americans at the center of their line. Instead, they set up a flanking maneuver and crossed the Brandywine Creek at points where Washington hadn’t stationed men.

About 5:30 a.m. on September 11, under the cover of fog, British troops approached unsuspecting Americans stationed on the Great Road near the creek. The first battle of the day was fought there on the ground of a Quaker meetinghouse that continued their service despite the action outside. The battle continued throughout the morning, with the British reaching the American right flank around 2 p.m. 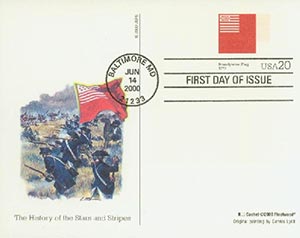 A few small battles broke out in the coming days, but it became obvious to the people of Philadelphia that they would be unable to defend their city. So the Continental Congress packed up their papers and quickly fled the city. Trying to put as much distance as possible between them and the British, they traveled about 60 miles west to Lancaster. In the meantime, the British arrived in Philadelphia unopposed on September 26. 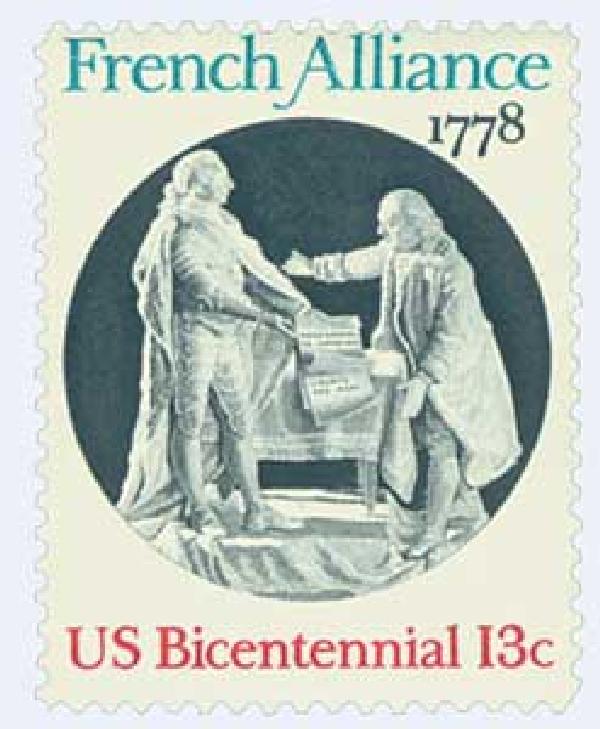 U.S. #1753 was issued for the 200th anniversary of the ratification of the 1778 Treaty of Alliance with France.

On September 27, 1777, Continental Congress held its one and only meeting in the Lancaster county courthouse. There were minimal lodgings in town and Congress felt they weren’t far enough away from the British, so they spent part of their meeting contemplating where to go next. However, one important decision they made that day was selecting Benjamin Franklin as a representative to go to France to negotiate a treaty.

The next day, the Continental Congress packed their belongings once again and moved another 20 miles away, to York, Pennsylvania. York was also strategically located on the western side of the Susquehanna River, which would make it easier to defend against attack. While there, the Congress approved the Articles of Confederation and signed a treaty of alliance with France. Once they received word that the British had abandoned Philadelphia in June 1778, they returned home. 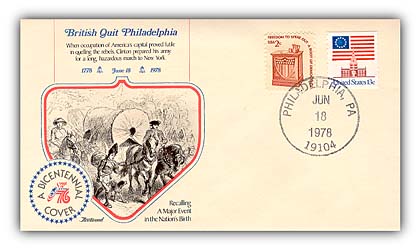 But that wasn’t the last time the capital was moved. In the summer of 1783, American government fled Philadelphia again, this time threatened by Continental Army soldiers demanding their back pay. The delegates moved 40 miles northeast to the College of New Jersey (now known as Princeton University) and used Nassau Hall as their headquarters for four months. It was there that they received their first foreign minister, from the Netherlands, and learned that the Treaty of Paris had been signed.

That November, the Congress continued to avoid Philadelphia by moving to the unfinished Maryland State House in Annapolis. While there, they received General Washington’s resignation as commander-in-chief of the Continental Army and ratified the Treaty of Paris.

A year later, in November 1784, Congress moved yet again, to the French Arms Tavern in Trenton, New Jersey. During their brief stay there, they witnessed the Marquis de Lafayette’s farewell address.   In January 1785, they moved on to New York City, where George Washington would later take his first oath of office as President of the United States. New York would serve as the nation’s capital until 1790 before it was returned to Philadelphia and finally moved to Washington, D.C., in 1800.