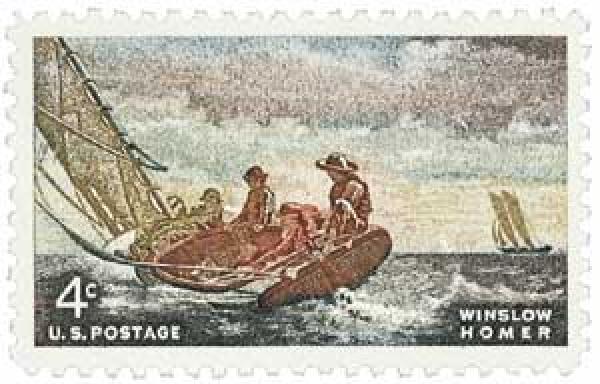 Winslow Homer was born on February 24, 1836, in Boston, Massachusetts. The second of three sons, Homer’s mother was a talented watercolorist that began teaching him to paint at a young age. Though Homer was an average student, he proved himself to be a talented artist early on. 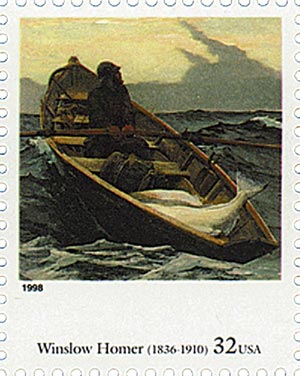 Homer’s father was always anxious to make money. He tried out different business ventures, moved to California for the gold rush, and even went to Europe to raise money for get-rich-quick schemes. Then, after Homer graduated from high school, his father got him an apprenticeship with a Boston lithographer. Though it was good experience, Homer grew tired of the repetitive work engraving sheet music covers. He began working as a freelance artist two years later and turned down an offer for a full-time position with Harper’s Weekly. Homer claimed, “From the time I took my nose off that lithographic stone I have had no master, and never shall have any.”

Homer worked as a successful freelance illustrator for the next 20 years. His work appeared in Ballou’s Pictorial and Harper’s Weekly. Most of his illustrations during this time were of urban and country scenes. In the coming years Homer moved to Belmont Massachusetts and later New York City. It was in New York that he opened his studio and briefly attended the National Academy of Design. Homer showed an immense skill painting with oils, even though he’d largely been training himself for about a year. His mother tried to raise money to send him to Europe to study, but he then received another job offer. Harper’s Weekly wanted to send him to the front lines of the Civil War. Homer obliged and sketched (and later painted) camp life as well as intense battle scenes. Most of his Civil War paintings picture George B. McClellan and his troops along the Potomac River. He also illustrated women in wartime, showing the effect of the war on the home front. 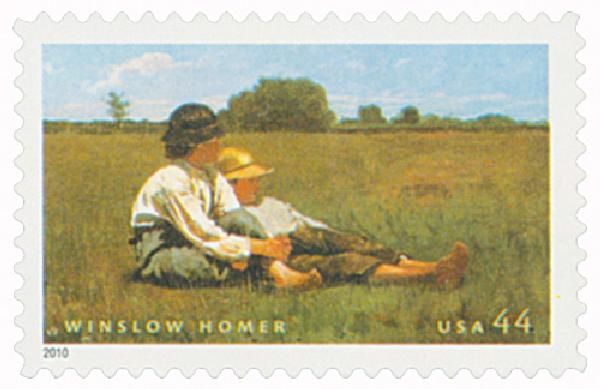 During and after the war, Homer returned to his New York studio and began exhibiting his paintings at the National Academy of Design. His painting, Home, Sweet Home, was particularly popular. As one critic described it, “It is a work of real feeling, soldiers in camp listening to the evening band, and thinking of the wives and darlings far away. There is no strained effect in it, no sentimentality, but a hearty, homely actuality, broadly, freely, and simply worked out.”

Homer also continued to do magazine illustrations for Our Young Folks and Frank Leslie’s Chimney Corner. He finally made it to Paris in 1867, where he spent a year. He produced about 12 paintings while there, largely focusing on peasant life. 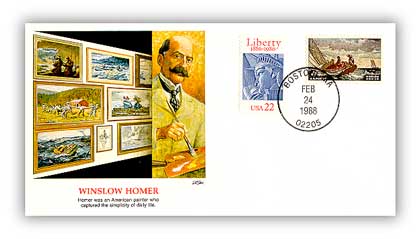 Homer’s post-war paintings focused largely on childhood, as he and much of the nation yearned for simpler times. His Crossing the Pasture pictured two young boys and represented hopes of a united future after a war that pitted brother against brother.

Homer decided to quit working as a commercial illustrator in 1875, so he could focus all of his attention on painting and watercolor. Though this took a strain on his finances, he was as popular as ever. Two of his paintings appeared at the 1876 Centennial Exposition in Philadelphia: Snap-the-Whip and Breezing Up. Around this time Homer visited Petersburg, Virginia, and began painting scenes of rural African American life. He explored racial tensions in such paintings as A Visit from the Old Mistress. 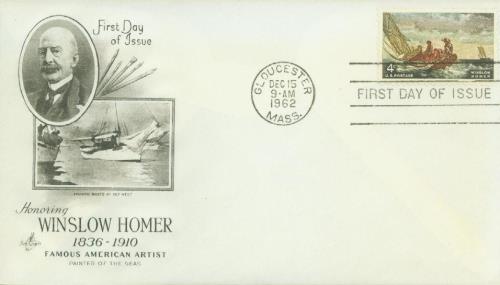 In 1873, Homer began painting with watercolors on a more regular basis. While some critics dismissed them, they proved popular with the public and improved his finances. Some were simple and impressionistic while others were highly detailed. He also used watercolors as his early versions of later oil paintings.

In the late 1870s, Home became reclusive (some suggest romantic troubles and others say emotional issues). He abandoned his urban social life and spent a while living hidden away in the Eastern Point Lighthouse. This renewed his love of painting the sea and fishermen. Then in 1881 Homer made another drastic move to England, where he lived for two years. Here he painted workingmen and women almost always in watercolor. The paintings from this era were larger and more detailed. 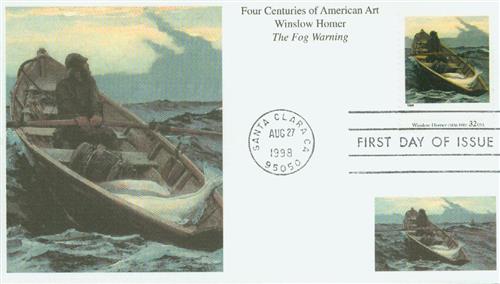 Homer returned to America in 1882 to display his new works in New York. Critics noticed the dramatic change in his work, claiming it “touch[ed] a far higher plane… They are works of High Art.” The following year he moved to Prouts Neck, Maine, and devoted much of his time to painting massive sea scenes. Many of these paintings depict a struggle between man and the sea. Now 50 years old, Homer was described as “Yankee Robinson Crusoe, cloistered on his art island” and “a hermit with a brush.” But he also spent the winter months in Florida, Cuba, and the Bahamas, painting vibrant Caribbean watercolors.

Homer had one of the biggest successes of his career in 1893 with The Fox Hunt. His largest painting, it was purchased by the Pennsylvania Academy of the Fine Arts, making the first time his work was hung in a major American museum. By the turn of the century Homer was finally financially stable and his work went for higher prices to museums. He continued painting into his final years until his death on September 29, 1910, leaving his painting, Shooting the Rapids, unfinished.