Posted on September 7, 2016 by MysticStamp 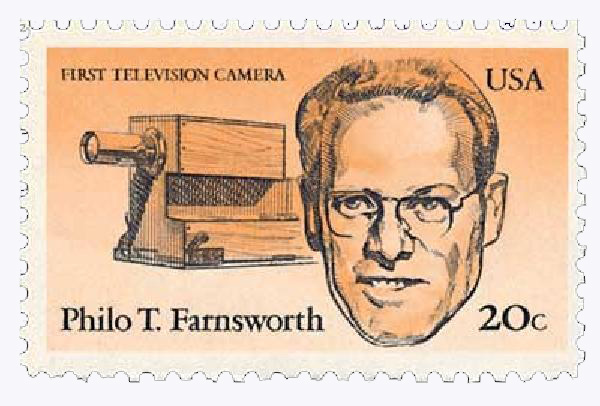 On September 7, 1927, inventor Philo T. Farnsworth made his first successful presentation of the “image dissector,” a crucial part of the first televisions.

Farnsworth was born August 19, 1906 in Beaver, Utah. He spent the first decade of his life in a small log cabin there, before his family moved to a relative’s 240-acre ranch near Rigby, Idaho. 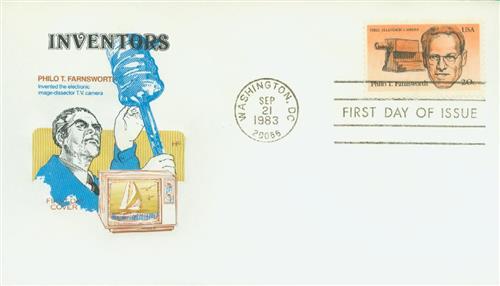 U.S. #2058 FDC – In his later life, Farnsworth became involved in research on radar and nuclear energy.

Farnsworth was thrilled to find his new home had electricity, which was powered by a generator. Though he had little knowledge of electricity, Farnsworth was fascinated by the generator and studied it whenever he could. And one day when his father and other adults were unsure why it had stopped working, young Farnsworth stepped in and got it working again.

Soon Farnsworth, barely a teenager, had turned the farm’s attic loft into his own science lab. One night in 1922, he read an article about how it could be possible to combine radio and motion pictures and transmit them into homes. Fascinated, he thought about the idea for months. At one point, he considered spinning mirrors, as he’d seen in science fiction, but that would be too slow. Then he had the sudden realization that he could capture light in a jar and then transmit it through individual electron beams. 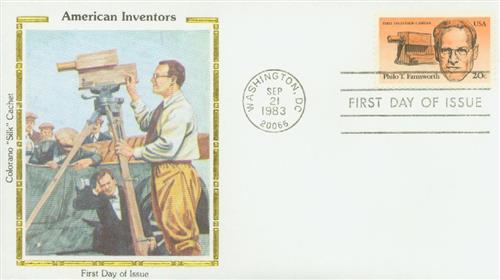 Farnsworth was so excited to share his idea, he went to school the next day and told his teacher, sketching a series of electrical diagrams on the chalkboard and proclaiming, “This is my idea for electric television.” He worked with his teacher for several weeks until they found a concept they believed would work.

But it would take several more years before Farnsworth could make his invention a reality. In the meantime he attended Brigham Young University and spent his spare time learning about vacuum tubes and cathode ray tubes. He was unable to finish college following his father’s death. So Farnsworth worked a series of odd jobs while he took correspondence courses in radio technology. At the suggestion of a friend, he chose not to publish his idea for fear someone might steal it. 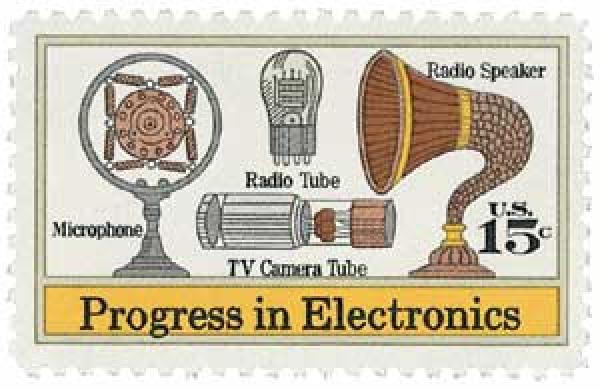 One of Farnsworth’s bosses, George Everson, was intrigued by his television idea and agreed to give him $6,000 to test it. Farnsworth and his new wife moved to Hollywood and turned their dining room into a laboratory. But he soon found that Everson’s investment alone wouldn’t be enough. So Everson arranged for him to meet with an electrical engineer. Once the engineer agreed that Farnsworth’s idea was possible, more people agreed to invest. 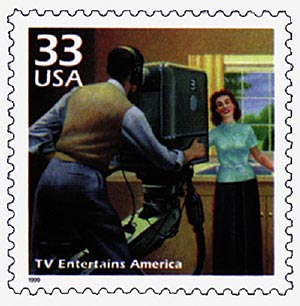 After a series of professional glassblowers told him what he wanted to create was impossible, Farnsworth enlisted friend Cliff Gardiner to learn the craft and become his chief glassblower. Meanwhile, on January 7, 1927, Farnsworth applied for his first patent (this is often considered the date that television was invented). Farnsworth and Gardiner created the first television camera tube, which they called the “image dissector.” This tube would dissect an image line-by-line with electrical charges and then transmit them.

Farnsworth used a chemistry flask for the first picture tube, which he called an “image oscillite.” It took several months and multiple tests to everything working right. Then on September 7, 1927, Farnsworth, Gardiner, his wife, and his investor prepared to test the television again. Farnsworth painted a black horizontal line on a glass slide. He believed that if the receiver showed the line going in the right direction, it was a success. In another room, Gardiner dropped the glass slide between the image dissector and a carbon arc light. There was a bit of static at first, but once it cleared, the group in the other room could see the straight line. Gardiner then rotated the slide, which the group in the other room was able to watch through the receiver. They were the first television viewers! 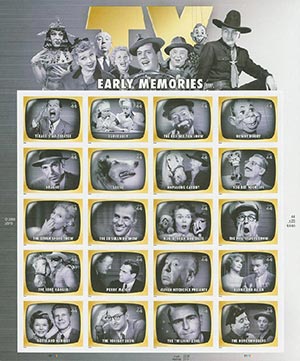 Farnsworth continued to perfect television technology in the coming years. He had his first public demonstration in the summer of 1935. Four years later, Franklin Roosevelt became the first U.S. president to appear on television, though it was only broadcast to a handful of televisions in New York City. Though demand for televisions skyrocketed in the coming years, Farnsworth’s company had been poorly managed (by others) and was eventually sold. In his later years, Farnsworth wondered if his work on the television for so long had been worth it. But when he watched a man walk on the moon in 1969, he knew it was. He died two years later and was eventually named one of Time Magazine’s 100 Greatest Scientists and Thinkers of the 20th Century.