Posted on September 7, 2017 by MysticStamp 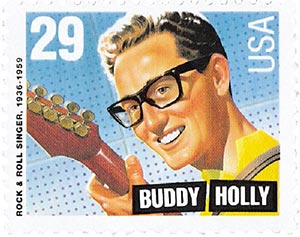 The fourth and youngest child in his family, Holly’s mother called him “Buddy” from an early age. He learned to play piano, fiddle, and guitar very young and his parents supported his musical ambitions.

Holly was initially influenced by the likes of Jimmie Rodgers and the Carter Family and had his beginnings as a country artist. After high school, Holly created a country western band and frequently had his songs played on the local radio station. Playing in small clubs in the Southwest, he gained a local following and was soon signed on by Decca records as a country singer. 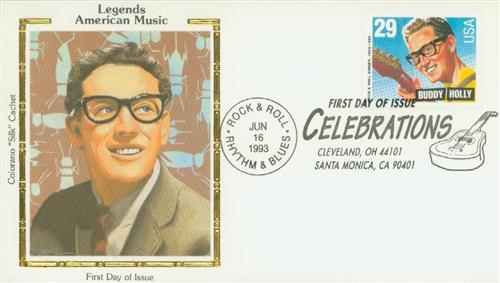 During this time, Holly’s band often opened for larger national acts. Among them was Elvis Presley in 1955. After opening for Presley, Holly was enamored with the singer and emulated his musical style. Soon his band started playing rock ‘n’ roll. 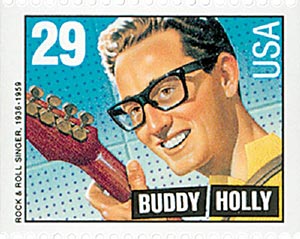 Deciding he had greater potential as a rock artist, Decca had him record both solo and as the lead singer of a group called the Crickets. Both ventures proved to be extremely successful. In 1957 his song “Peggy Sue” hit the charts and the Crickets’ “That’ll Be the Day” sold over a million copies. 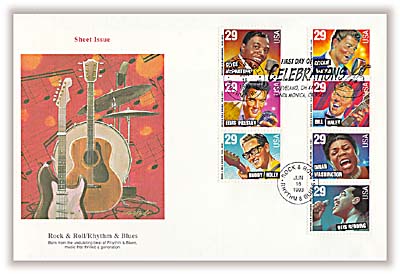 From 1955 to 1958, Holly and the Crickets had their own radio show and toured throughout the U.S. and abroad. It was on one such tour that Holly lost his life, along with Ritchie Valens and J.P. Richardson, when their plane crashed on the way to Fargo, North Dakota, on February 3, 1959. 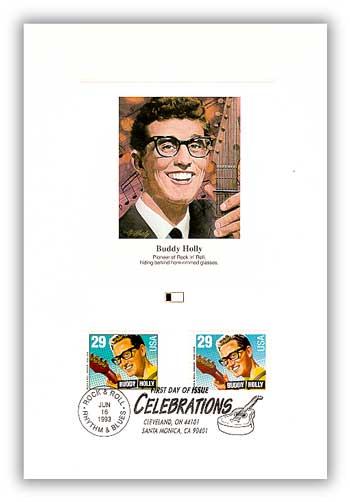 Holly’s professional career only lasted about two years, but his music and style were influential on a generation of musicians. Among them were Elvis Costello, Bob Dylan, The Rolling Stones, and the Beatles.

Click here to watch a collection of Buddy Holly performances.