Posted on September 8, 2019 by MysticStamp 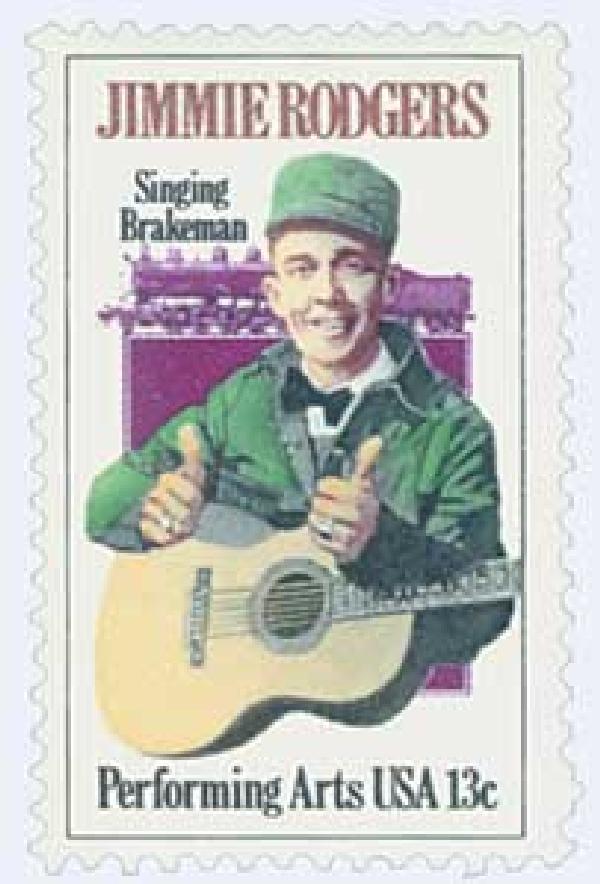 US #1755 was issued in Meridian during the annual Jimmie Rodgers Festival.

James Charles Rodgers was born on September 8, 1897, in Meridian, Mississippi.  Although later in life Rodgers claimed he was born in Geiger, Alabama, where his grandparents lived.

Rodgers’ mother died when he was about six.  He spent several years living with different relatives in Mississippi and Alabama before settling with his father and his new wife in Meridian.

Rodgers discovered his love for entertaining at an early age.  By the time he was 13, he had organized two traveling shows but was forced to return home by his father.  Rodgers father, a foreman on the Mobile and Ohio Railroad, found him a job as a railroad water boy.  This experience gave him an even greater love for music, as he learned to play guitar from rail workers and hobos.

Within a few years, Rodgers was made a brakeman on the New Orleans and Northeastern Railroad.  However, in 1924 he was diagnosed with tuberculosis and was forced to abandon his railroad career.  Rodgers used this time to organize his own traveling roadshow across the Southeastern US. Unfortunately, disaster struck and a storm destroyed his tent, forcing him to return home. 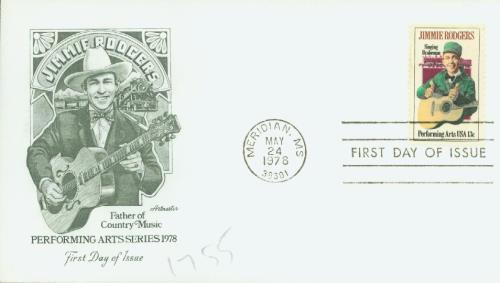 Rodgers returned to working on the railroad two separate times, but his health prevented him from doing his job and he eventually returned to Meridian.  Then in April 1927, Rodgers went to Asheville, North Carolina and performed on the radio for the first time.  Within a few months, he put together a band, The Jimmie Rodgers Entertainers, and performed on the radio every week. 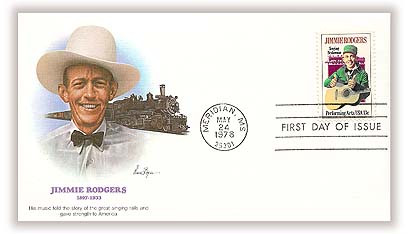 That August, a representative from a record company was coming to town to audition local musicians.  Rodgers and his band performed for him and he agreed to record them.  A disagreement between Rodgers and the band ensued, and Rodgers ended up at the recording session alone.  He was paid $100 to sing two songs that were released in October and achieved some success. 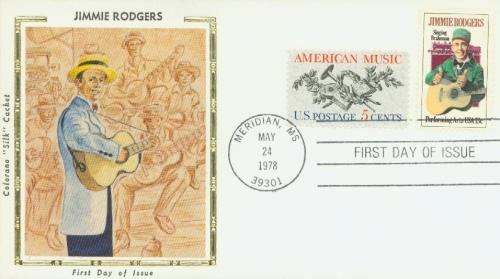 Rodgers was encouraged by his success and asked his sister-in-law to help him write songs for another recording session.  He went to New York and recorded four songs, including “Blue Yodel.”  That song sold half a million copies in the next two years and helped Rodgers gain national fame.  Soon he was selling out shows across the country.

Rodgers went on to star in his own movie short, The Singing Brakeman.  He also toured the Midwest with Will Rodgers in support of the Red Cross.

By 1932, Rogers’ health was failing.  He was no longer able to tour, but he did have a weekly radio show.  Despite his poor health, he traveled to New York for another recording session and died there on May 26, 1933, at just 35 years old.  At the time, his recordings made up 10% of his record company’s sales.