What automobile made an important test run 122 years ago today?

On July 28, 1898, Alexander Winton began a nine-day test-drive of his automobile, proving its reliability to investors.

Alexander Winton was born on June 20, 1860, in Grangemouth, Scotland.  He came to the United States when he was 19 and worked at Delameter Iron Works and a marine engine shop before moving to Cleveland in 1884. 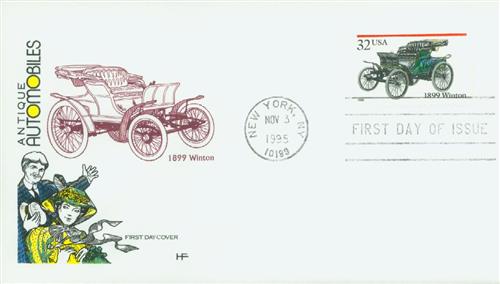 In 1891, he created Winton Bicycle Company and began producing bicycles from his own patented design.  The business was a great success, but within 10 years, Winton turned his attention to automobiles.  He built his first motorcar in 1896.  Using B.F. Goodrich tires, this marked the first use of pneumatic tires on an automobile.  Winton established the Winton Motor Carriage Company the following year. 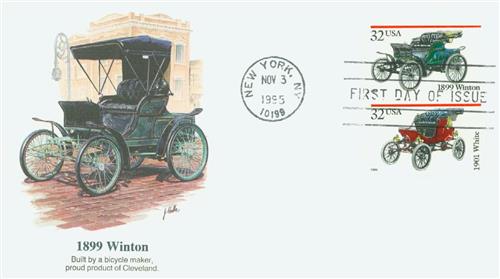 By the spring of 1897, Winton had two functioning automobile prototypes.  He drove one on a 60-mile test drive to prove its reliability, but some were still skeptical. So he arranged a much longer drive to prove the success of his vehicles.  On July 28, 1897, Winton embarked on a nine-day, 800-mile trip from Cleveland to New York to show how reliable the car was.  In all, he drove for 78 hours and 43 minutes.  The great success of that trip helped him to gain investors to build four more cars. 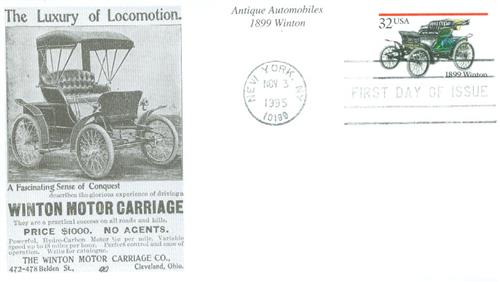 On March 24, 1898, Winton sold the first American American-made standard-model gasoline car in the country.  Winton then made a more wide-publicized drive in 1899 that helped to boost his sales.

The 1899 Winton was the first “production” car ever sold in the United States.  With a list price of $1,000, the two-seater phaeton (an open carriage four-wheel vehicle) featured a horizontal single-cylinder engine, two-speed transmission, and laminated wood frame. Two hundred of the cars were sold in 1899. 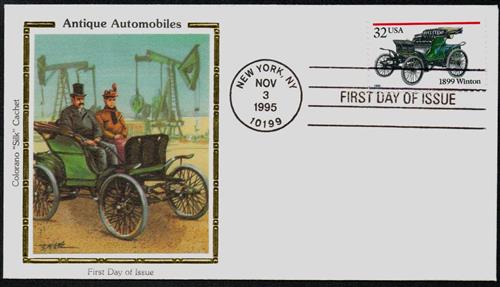 The popularity of Winton’s cars led to the opening of the first automobile dealership in Reading, Pennsylvania. Winton didn’t want the cars to have miles on them when they were sold, so he built the first auto hauler in the country.  Soon other car companies began requesting car haulers of their own.  Winton also built the first mail delivery vehicle for the US Post Office.  He was a notable inventor, with more than 100 car and engine patents to his name. Winton also allowed the free use of his patents when safety was involved. 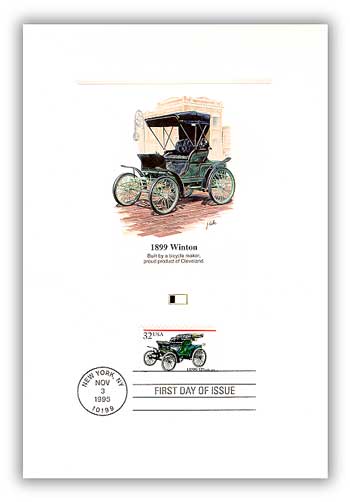 Winton maintained his status as the top-selling automobile producer in the US for many years following that car’s release by constantly improving his product. In 1902 Winton’s racing car, “Bullet No. 1” set a speed record of one mile in 52.2 seconds at Daytona Beach, Florida.

Winton designed and built four- and six-cylinder engines, as well as America’s first straight eight-cylinder. In 1912 he founded the Winton Gas Engine Company to experiment with marine diesel engines. In 1913, his company built the first diesel engine in America.  Upon retiring in 1930, he sold his company to General Motors. He died two years later on June 21, 1932.  Years later, Winton was inducted into the Automotive Hall of Fame and the National Inventors Hall of Fame.

10 Responses to "What automobile made an important test run 122 years ago today?"