What bridge was dedicated on this day in 1927 to mark 100 years of friendship between the U.S. and Canada? 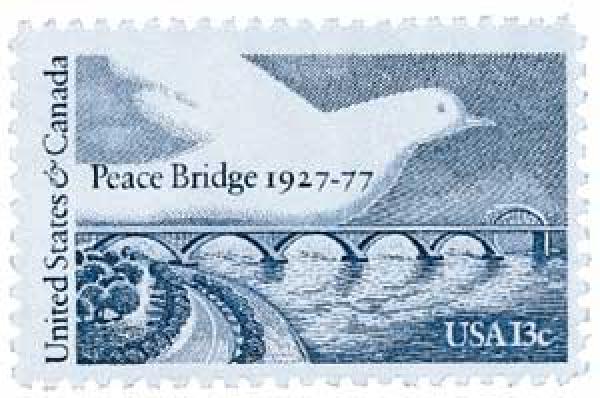 US #1721 was issued for the 50th anniversary of the bridge. Click image to order.

On August 7, 1927, the Peace Bridge linking the US and Canada was dedicated by representatives from both nations and the United Kingdom.

In the 1800s, ferries frequently crossed the Upper Niagara River between Fort Erie, Ontario, and Buffalo, New York.  However, too many boats at once created a bottleneck and strong currents and ice made passage dangerous during several months of the year.  The Railway Bridge opened in 1873 to make this route safer.

But by the early 1900s, the Railway Bridge wasn’t enough, as it didn’t accommodate pedestrian or car crossing.  In 1919, businessman Alonzo Clark Mather began to campaign for a new bridge that would not only increase traffic but also commemorate a century of peace and cooperation between the two nations. 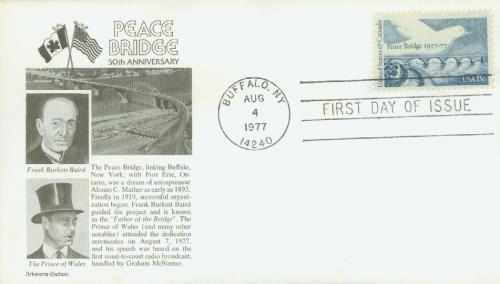 Working with Frank Burkett Baird and William C. Eckert, Mather got the bridge idea approved by the International Joint Commission.  The $4.5 million needed to fund the bridge was raised largely through bond issues.  Construction broke ground on August 17, 1925.  The new bridge would be built about .6 miles south of the International Railway Bridge.

Building the bridge was a difficult task, as it was over water with a current of up to 12 miles per hour.  The completed bridge was composed of 9,800 tons of structural and reinforcing steel and spanned 5,800 feet. 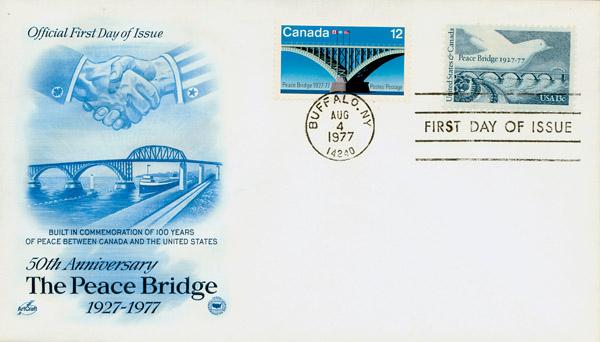 The bridge’s chief engineer, Edward Lupfer, drove the first car across the bridge on March 1927.  The bridge then opened to the public on June 1 of that year, with the official ceremony to be held two months later.

The official opening ceremony held on August 7, 1927, was an international affair.  The main speaker of the day was Edward, Prince of Wales who gave a brief, but eloquent speech: 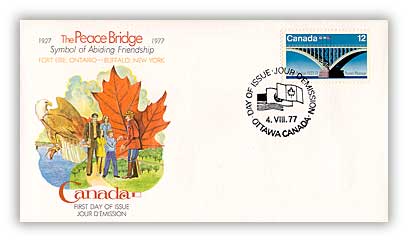 “It gives me great pleasure to be present on the occasion of the formal dedication of this bridge which commemorates the peace which has happily endured between the British Empire and the United States for more than a century.

“May this bridge be not only a physical and material link between Canada and the United States but may it also be symbolical of the maintenance of their friendly contacts by those who live on both sides of this frontier; may it serve also as continual reminder to those who will use it, and to all at us, that to seek peace and ensure it is the first and highest duty both of this generation and of those which are yet to come.” 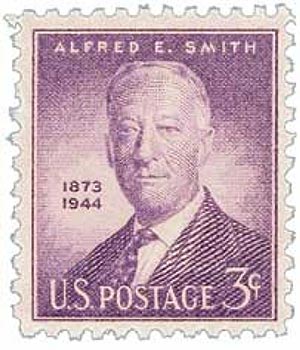 US #937 – Alfred E. Smith was among the speakers at the opening ceremony. Click image to order.

“What has been said of the relations of the English speaking peoples and what I am to say is but the verbal acknowledgment of a common feeling, shared equally and alike by the Englishmen, Canadians, and Americans who are gathered here.  We speak the same language, we cherish the same ideals of citizenship, we hold a common principle in government, of individual liberty under the law.

“The foundation of this great peace structure which we dedicate today rests upon the firm bedrock of the Niagara, and the peace of the English speaking peoples is as firmly based upon common instincts and ideals.  The instinct of self-preservation — the most deep-seated of mankind — binds us together, and in that unbroken tie is that ultimate guarantee of the safety and progress of Western civilization. That bond will never break.” 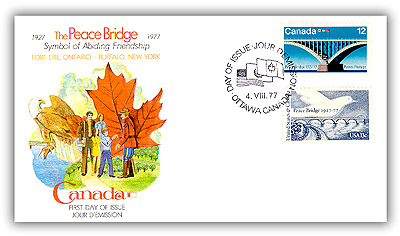 In addition to the speeches, three military bands and 200 singers added to the day’s presentations.  An estimated 100,000 people were present for the ceremony on Buffalo’s west side.  The ceremony was broadcast on dozens of radio stations and is considered one of the first “round the world” radio broadcasts, reaching as far away as Australia.  It’s been estimated some 50 million people listened to that broadcast.

The new Peace Bridge made Buffalo and Fort Erie the main port of entry to each nation from the other.  At the time of its completion, it was the only automobile bridge on the Great Lakes.  Although newer bridges have been built, the Peace Bridge remains busy, carrying an average of 4,000 trucks on a daily basis.

3 Responses to "What bridge was dedicated on this day in 1927 to mark 100 years of friendship between the U.S. and Canada?"