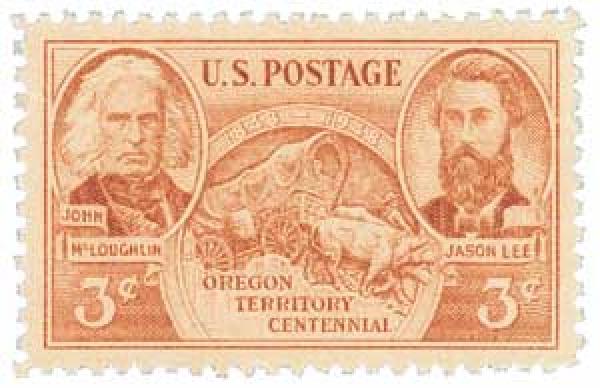 US #964 was issued on the 100th anniversary of the territory’s establishment. Click image to order.

On August 14, 1848, the Oregon Territory was established.

American ships reached the Oregon coast in 1788.  In 1792, Captain Robert Gray, an American, was the first European to explore the Columbia River.  Gray named the river after his ship.  The Lewis and Clark Expedition traveled by land to the mouth of the Columbia River in 1805.  These explorations gave the United States solid grounds for claiming the Oregon region.

In the early 1800s, the Oregon region was defined as stretching from Alaska, which was controlled by Russia, to California, which was ruled by Spain.  Oregon’s eastern boundary extended all the way to the Rocky Mountains.  Russia, Spain, Great Britain, and the United States all made claims on this area. 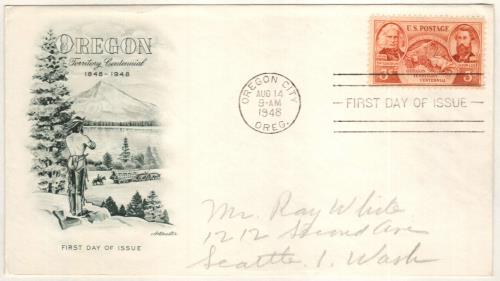 In 1819, Spain signed a treaty giving up its claim to territory north of latitude 42º, which is modern Oregon’s southern boundary.  Russia signed treaties with Great Britain and the US, relinquishing its claims south of 54º 40’.  However, the US and Britain could not agree on a boundary and signed an agreement by which citizens of both nations could settle in Oregon. 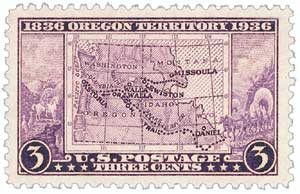 US #783 was issued for the 100th anniversary of the founding of the Whitman Mission at Waiilatpu. Click image to order.

American fur trader John Jacob Astor began white settlement of Oregon when he established a fur trading company at Astoria.  After the War of 1812, Great Britain took control of Astoria.  In 1825, the British Hudson Bay Company established Fort Vancouver at the site of today’s Vancouver, Washington.  John McLoughlin served as head of the firm for 20 years – which basically meant he ruled the region.  McLoughlin later became a US citizen.  He played a key role in the settlement of the state and is today remembered as the “father of Oregon.” 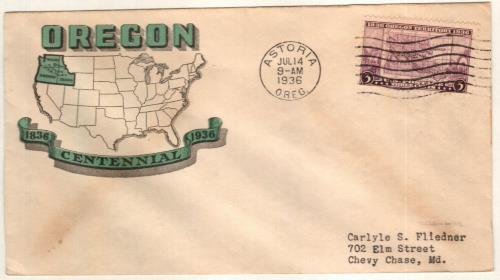 Methodist missionaries at Willamette Valley created the first permanent American settlement in Oregon in 1834.  After this settlement was established, hundreds of Americans began pouring into the area every year.  This put pressure on the US and Britain to settle their boundary dispute. 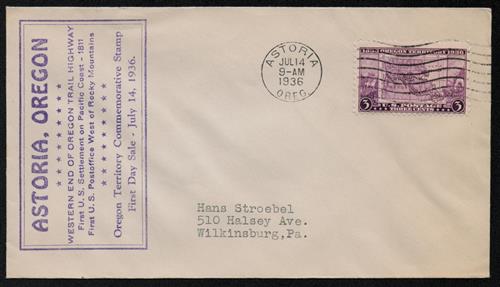 In 1844, James K. Polk ran for the US presidency, based on a campaign stating that land south of 54º 40’ belonged to the US.  The slogan “Fifty-Four Forty or Fight” became a big part of his campaign.  Polk was elected President, and in 1846, he signed a treaty with Great Britain fixing the 49th parallel as the main dividing line between the territories of the two nations. 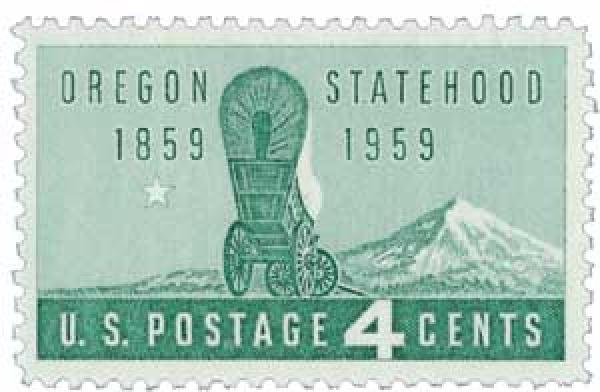 US #1124 was issued for the 100th anniversary of Oregon statehood. Click image to order.

Oregon settlers organized a provisional government in 1843.  They adopted a set of laws patterned after those of Iowa.  The area was left unorganized until the Whitman Massacre, in which members of the Cayuse tribe killed a family of missionaries and 11 others.  On August 14, 1848, Congress passed the Act to Establish the Territorial Government of Oregon.  The territory consisted of all of the present-day states of Idaho, Oregon, and Washington, as well as parts of Montana and Wyoming.  Oregon City served as the capital until 1850, when it was moved to Salem.  In 1853, the Washington Territory was created, and Oregon received the same boundaries it has today. 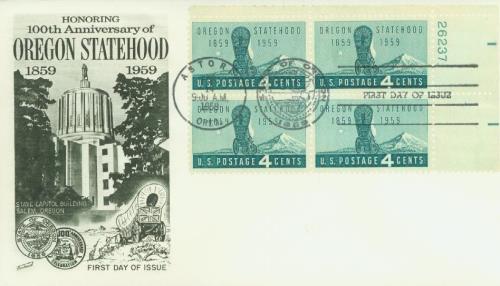 The territory grew fast after the attractive Donation Land Law of 1850 was passed.  This law gave 320 acres of land to any US citizen over 18.  A settler’s wife could also receive 320 acres.  The settler had to cultivate the land for a minimum of four years to qualify for ownership.  Starting December 1850, and until December 1855, settlers received 160 acres of land and had to be over 21 years old.  On February 14, 1859, the Oregon Territory was admitted to the Union as the 33rd state.