Who was the first American woman to earn a Nobel Prize in Science? 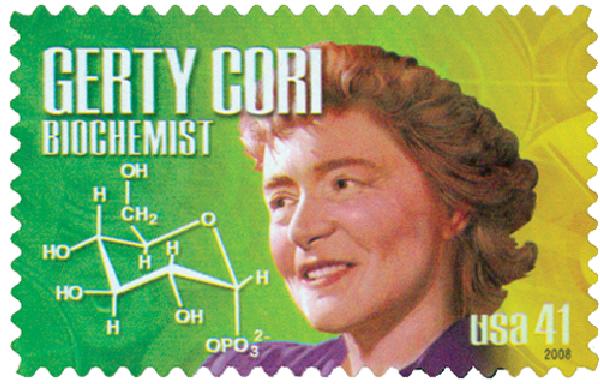 US #4224 – This stamp reportedly has an error in the chemical formula for Cori ester.

Gerty was the daughter of a chemist who invented a method for refining sugar.  She was tutored at home before going to secondary school, where she decided at age 16 she wanted to be a doctor.  Gerty then discovered that in order to enter a scientific program, she needed to study Latin, physics, chemistry, and math.  In just one year she studied the equivalent of eight years of Latin, five of science, and five of math.

Gerty’s hard work paid off, and in 1914 she was admitted to the medical school at Karl-Ferdinands-Universität.  While there, she met and married Carl Cori.  After graduation, they moved to Vienna, where Gerty worked in a children’s hospital.  Her husband was drafted into the Austrian Army during World War I, and after the war, Gerty suffered from malnutrition from the food shortages.  This coupled with rising anti-Semitism led the Cori’s to leave Europe for America in 1922. 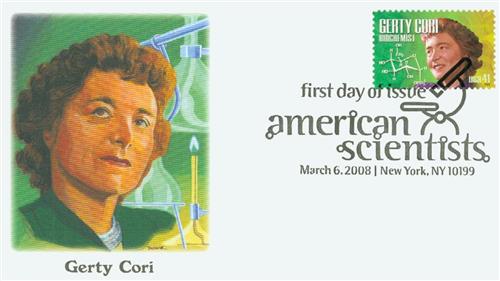 In America, the Cori’s worked on medical research at the State Institute for the Study of Malignant Diseases (later Roswell Park Cancer Institute) in Buffalo, New York.  They became US citizens in 1928.

The Coris were often told that they shouldn’t work together, but they continued to, and during their time in Buffalo, they published 50 research papers together.  Their main focus was studying how glucose was metabolized in the body and the hormones that were involved in the process.  In 1929, they discovered the Cori Cycle, which shows how carbohydrates are metabolized in the body. 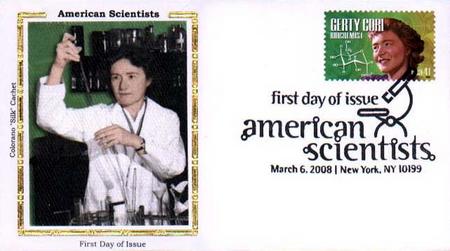 When the couple decided to leave Buffalo, Carl was offered many university positions, but Gerty, as a female, was not.  The Coris’ moved to St. Louis, Missouri, in 1931, after accepting positions at Washington University School of Medicine.  However, Gerty was hired as a research associate, earning one-tenth of what her husband did.  It would take 13 years for her to finally receive the same rank as her husband.

While in Missouri, the Coris discovered a compound in frog muscles that aided in the breakdown of glycogen, which became known as the Cori ester.  Gerty also studied glycogen storage disease and was the first to show that defects in enzymes could cause genetic diseases.

US #4224-27 was the second issue in the American Scientists Series.

In 1947, the Coris won the Nobel Prize in Physiology or Medicine “for their discovery of the course of the catalytic conversion of glycogen.”  This made Gerty the first American woman (and third woman overall) to receive a Nobel in science.  They split the prize with Bernardo Houssay “for his discovery of the part played by the hormone of the anterior pituitary lobe in the metabolism of sugar.”  The Coris led to major advancements in the treatment of diabetes.

Shortly before winning the Nobel Prize, Gerty was diagnosed with myelofibrosis, a bone marrow disease.  She continued to work for another 10 years.  During that time she was elected a fellow of the American Academy of Sciences and appointed to the National Science Foundation.  She also received a number of awards and honorary Doctor of Science degrees.  Gerty died on October 26, 1957.  The Cori Crater on the Moon was named for her.

4 Responses to "Who was the first American woman to earn a Nobel Prize in Science?"